Mozart owned a horse, dogs and a flock of birds, including a starling that reputedly could sing a line from one of the composer’s piano concertos. Verdi shared his rural estate in Sant’Agata with dogs, peacocks, cats, parrots, pheasants and chickens; and the animal-loving Richard Wagner is famously buried at the bottom of his Bayreuth garden alongside his wife and two of his favourite dogs.

The connection between operatic artists and their pets is poignant and inspiring. After soprano Rosa Ponselle rescued an orphaned fox cub from Puccini’s estate in Viareggio, she crossed the ocean with her furry charge and raised him in her elegant New York apartment. But what about today’s opera professionals? How do pets inspire, comfort and regulate their often-tumultuous careers in the performing arts?

In this ongoing series, Dawn Martens speaks to artists across Canada.

These are their stories… and their pets. 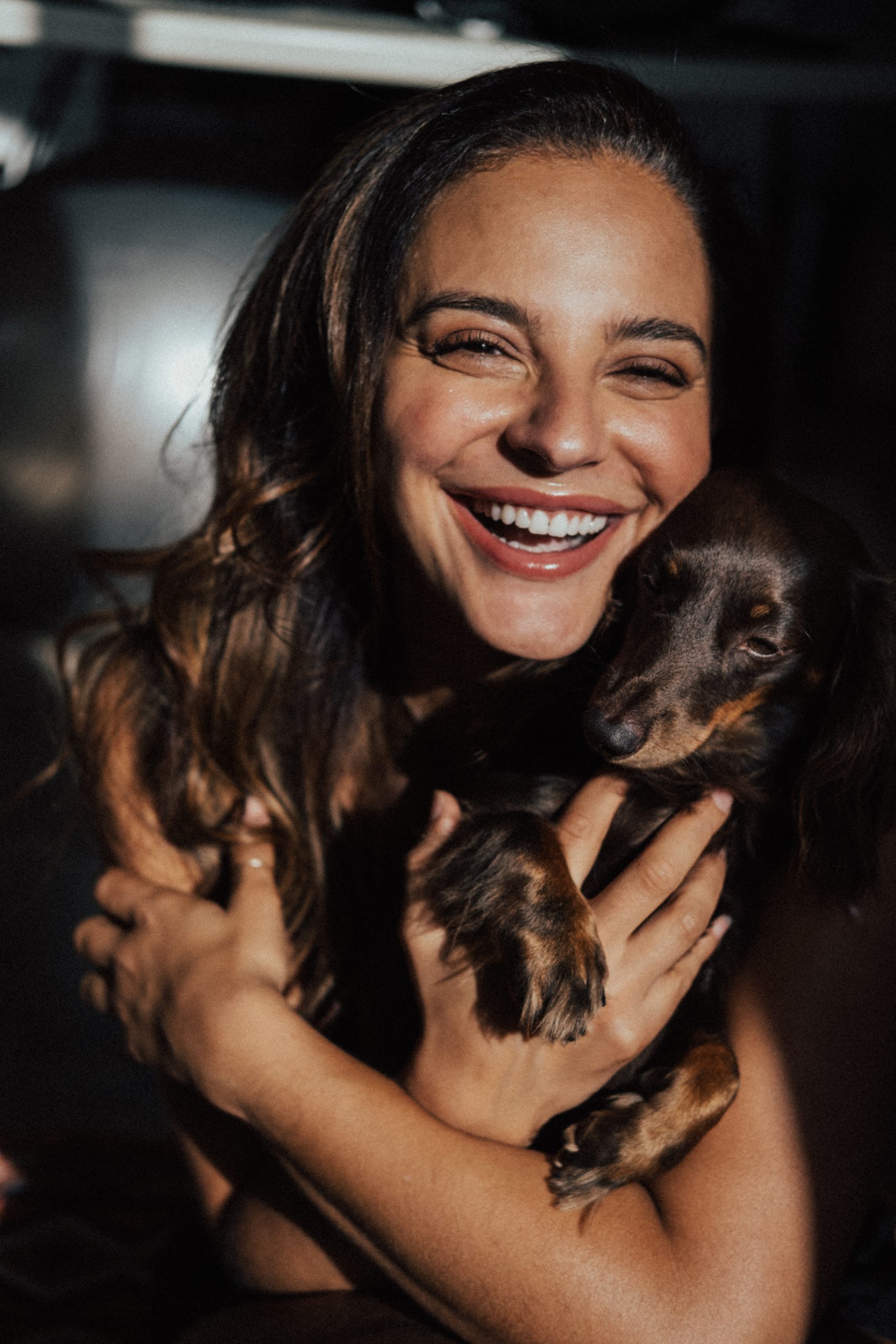 Nahla is a stunning, chocolate-and-tan Miniature Dachshund, currently 4 1/2 years old. We decided to go with the French Naming Convention for Dog Registry, which states that all dogs born in the same year in France must start with a certain letter. This convention has been in place for nearly 100 years. When we got our first letter, “N,” in 2017, I chose Nahla because of The Lion King, which is one of my favourite movies of all time. I love the character of Nala in the movie; she is fierce, intrepid, independent, and courageous. I decided to add the “H” to the name to add an Arabic flavour. In Arabic, Nahla means “first drink of water or water in the desert.” It seemed fitting to honour my Tunisian roots.

Having a dog has taught me so much—mindfulness, patience and the importance of walking. I have discovered the cool areas and nice restaurants in many cities because we walk so much together. She also brings routine because I have to walk her, feed her and play with her at certain times. Travelling with a dog is difficult because you really have to be on top of everything with flights, vaccination records, health certificates and accommodations. But Nahla has brought such peace, fun, joy and clarity to my life.

Nahla has appeared in one show with me. It was the closing night of a run of Offenbach’s Fantasio at Opéra Orchestre national Montpellier; she made a little appearance at the end of the show during the big party as the Chien de la Princesse. She also has some celebrity canine friends. When I was in Houston for a world premiere, I decided to take a sailing course in my time off with the American Sailing Association. I was needed in the Galveston Bay Area for most of one weekend, so my fellow artists offered to take Nahla. Tristan (a fellow mini dachshund) and Lenny (a golden retriever), together with their dad, mom and grandpa, all enjoyed pampering her. She had a wonderful time with Luca Pisaroni, Catherine Pisaroni and granddad Thomas Hampson! 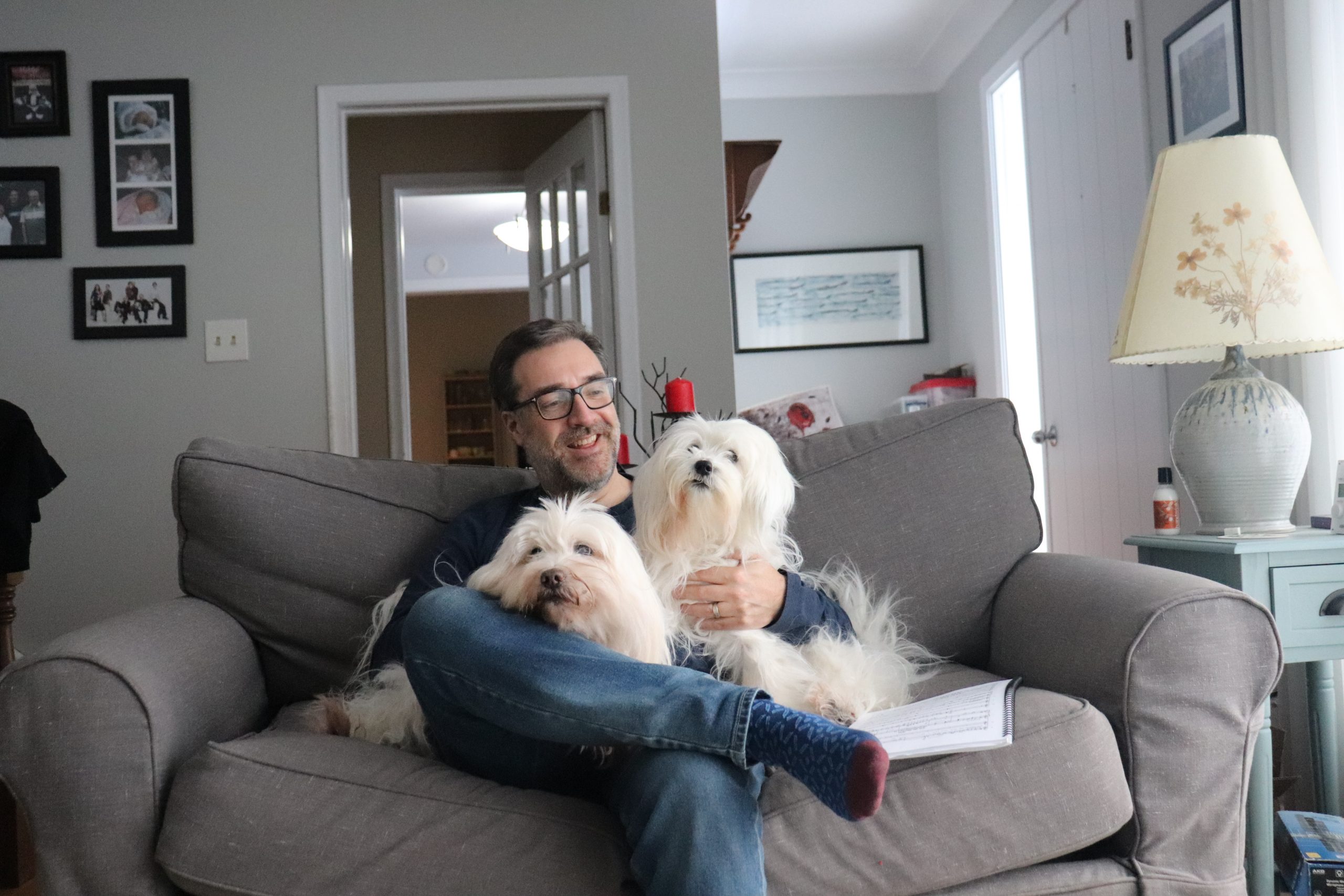 I have two Tibetan Terriers (not a common breed and not true terriers) named Felix and Annie. They are half-siblings bred by my in-laws at Snopaw Tibetan Terriers in Beaconsfield, Quebec. Felix, the old guy at almost 18, is named after Mendelssohn (there are a lot of musicians in my wife’s family). Annie’s litter mates (she’s 13) were named after stars and star-related things, so her name is short for Star Anise.

Being a composer is different from being a singer. Generally, if I have to be out of town for a show, it isn’t for that long. Julia, my wife, is an orchestral violinist, so there’s usually someone around to take care of the dogs. Felix and Annie have been great company. I may not be away much, but as a composer I sit in a room by myself for copious amounts of time—frequently in a basement and often at all hours of the night. That can be kind of lonely, but the dogs are always quite content to curl up under the piano or on the nearby couch and snooze while I write. No judgement at all. Sometimes they’ll click down the stairs after having gone to bed for a while, just wondering where I am. It’s quite comforting.

There’s no question that my dogs have crept into my work. My opera The Bremen Town Musicians (commissioned and premiered by Opera Lyra Ottawa in 2009) prominently features a dog and our two little fur balls provided some inspiration. Some years ago, I helped my young daughters, Blythe and Maeve, create a stained-glass window of our family and they each drew one of the dogs. In 2017, as Artistic Director of the Canadian Children’s Opera Company, I needed to create a poster for our production of the opera Brundibàr, which also features a dog. The poster was meant to look like a child’s chalk drawing and so I “borrowed” Maeve’s design. A moment of stardom for Annie!

Our dogs are always such a comfort and reminder to slow down now and then—vital for anyone trying to pursue an artistic career. Felix shows his age at times, but he really perked up when we moved out of the city and into the country just north of Kingston, Ontario.  I think I could say the same for myself. 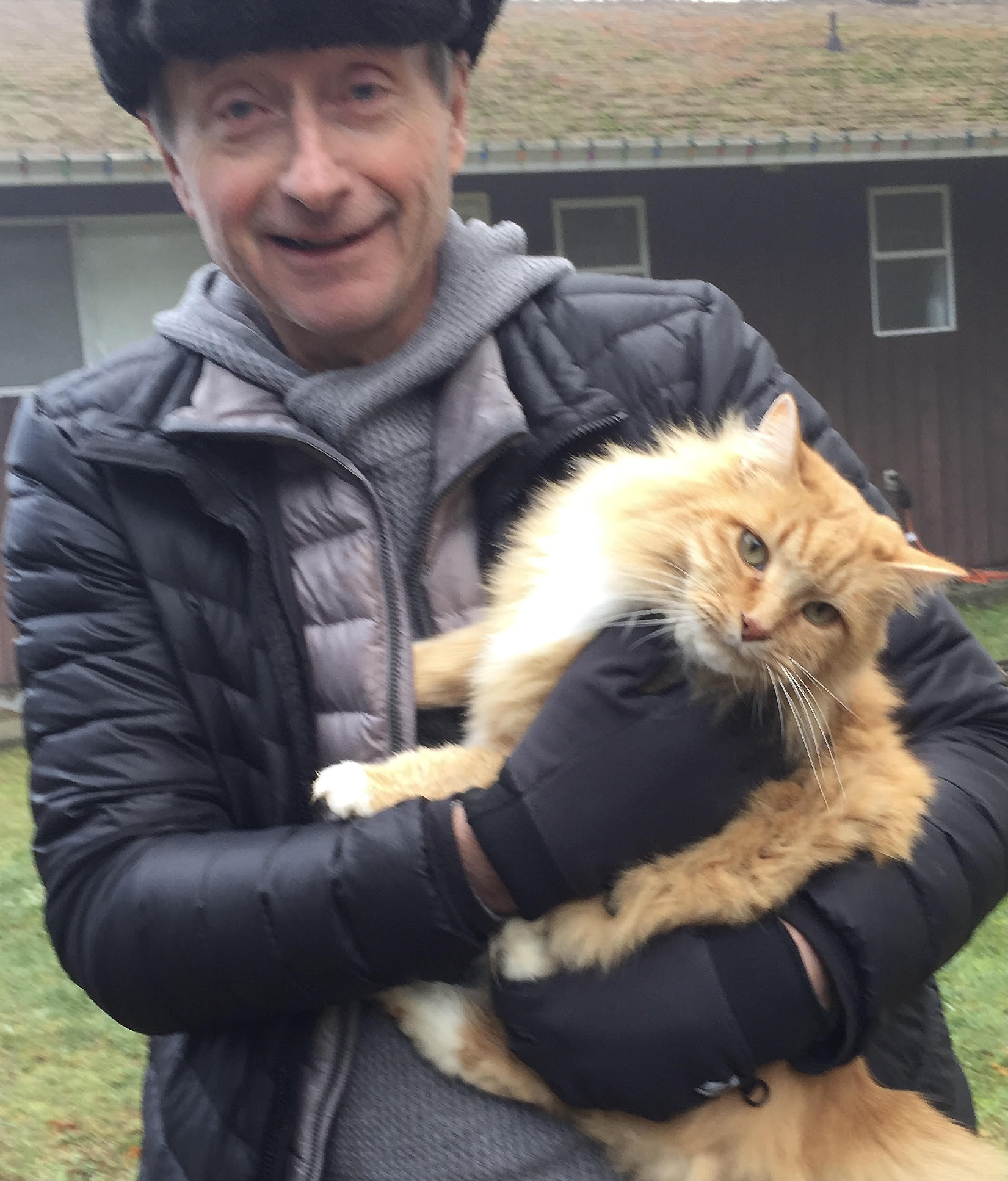 Kathleen Brett and I live in New York City, but keep a house on Vancouver Island, which we get to as often as possible, not least because that is where Howard Brett lives. Howie is a 10-year-old Siberian Tabby owned … or I should say, who consents to live with us in our Comox Valley home, where he is Lord of the Manor.  He was originally owned by tenants on the property, but after they moved, he walked the 17 kilometers back and took over our home and property, his owners having abandoned him. His name had been Rowdy, which did not suit him (and which may have contributed to his decision to leave his original owners). After we had asked in amazement a number of times, “How did he find his way back?”, the line got shortened to “How did he?” This then became just “Howie”—formally, of course, Howard.

Howie has his own very distinct artistic aesthetic, including the “flop and roll” for which he is well known locally. When he is the centre of attention (most of the time he is in the room), he falls over, deliberately and very dramatically, and rolls about a few times, garnering even more attention, and frequently applause. As Lord of the Manor, he has daily duties around the property, and these make him too busy to appear onstage.

Howie is a solo performer and has not agreed to appear with us yet, but he is extremely attracted to the images of fellow artists who appear on Zoom when Kathleen is teaching or coaching or when I am meeting online.  He curls up on the keyboard and is very attentive to the goings on onscreen.

In so many ways, Howie is our keeper when we are home and comes with us wherever we go.  Our home is in a relatively remote and forested area overlooking the sea, and when we go walking or go to corners of the property to sit and read or talk, Howie walks with us and we keep each other very good company. Although he is a very athletic sleeper (his rather extreme sleep poses are well-documented), he is a little suspicious of our sleeping so will frequently come in to check on us by tapping our faces to make sure we are well awake.

Howie oversees the smaller wildlife on the property and maintains the numbers as he sees fit. He tried that with the deer until he was suddenly rushed by an adult and had to take exaggerated defensive flight to avoid injury. He also enjoys hanging out with the horses in their paddock, which they seem to enjoy as well.  Recently, I observed him sunning on the deck that runs across the front of the house, where there are a number of hummingbird feeders.  I took my eyes off him briefly and when I looked again, he was strolling toward me like a model on a catwalk, sporting the most fashionable bow tie under his chin.  As he got closer, I could see his cheeks bulging and I realized his bow tie was actually the tail of a hummingbird sticking out of his mouth.  When I insisted, he dropped the half-swallowed bird, which, after recovering from shock, was fine and flew off.  Howie would not speak to me for the rest of the day.