Edmonton Opera, like many companies, has tried to stay in touch with its supporters during the pandemic by offering various virtual performances, but it has also drawn a smattering of its audience to its Jubilee Auditorium venue for some live concerts. Well, at least to the parking lot of the Jube, where for the third time since last fall, it presented what it is calling “Drive-in Opera” for three evenings, Mar. 13th-15th, attracting about 100 vehicles to the south lot, pointed toward the three-story brick wall where the three performers were projected as the sun set on a warm Edmonton evening. 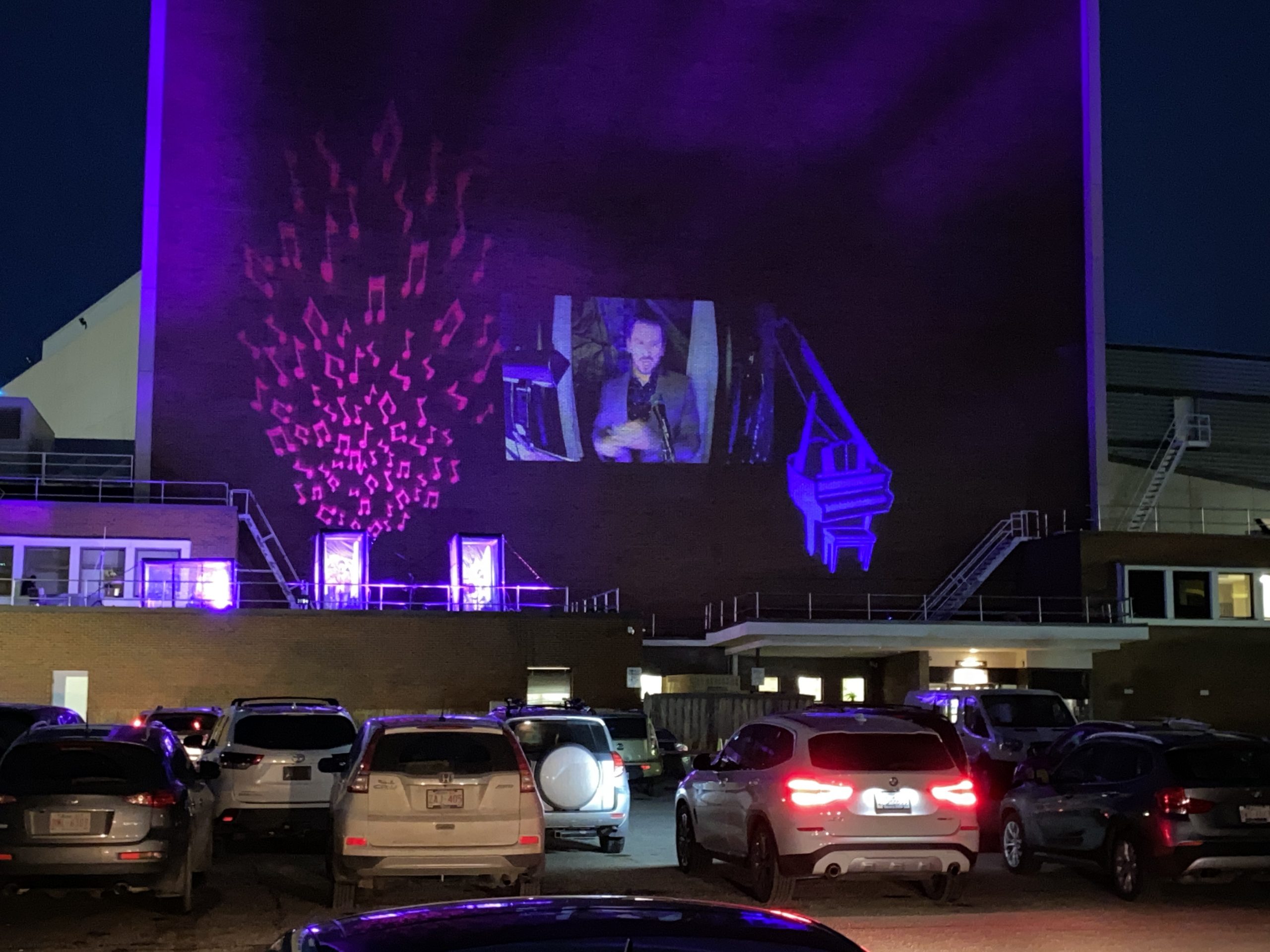 Cars lined up to see the latest performances at the sold out spring Drive-in Opera show hosted by Edmonton Opera. Photo: Cameron MacRae

The two singers stood in separate transparent plexiglass booths on the mid-level roof of the building, in front of microphones located about 50 metres from my stall in the second row. The singers’ images were projected onto the brick wall to their left, which was also decorated with clusters of tied eighth notes. By the seven o’clock start, the sky was already dark enough to frame the images effectively, and through the ancient medium of FM radio (as opposed to the internet), the audience in their vehicles listened to the performance, each group safely ensconced in their respective metal bubbles. 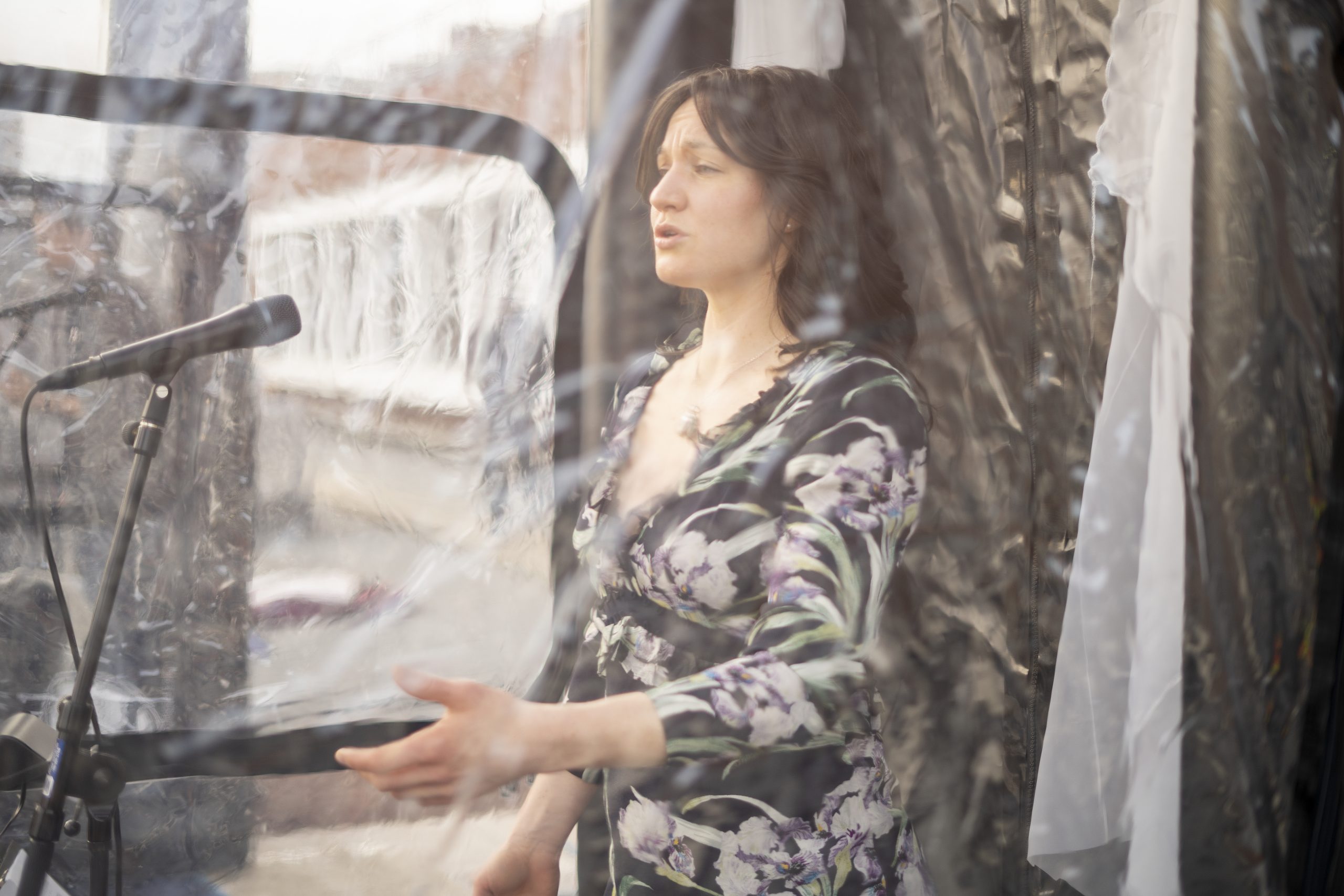 “We find that a 45-minute program enables us to run two performances in an evening, allowing enough time for entry and egress between performances. The lot holds 103 cars, so we were interested in maximizing audience size while still keeping the price accessible.”

Since no one wants to be idling their vehicles for such a long period, and it didn’t look like people were, running on the battery alone for almost an hour might have led some folks to require a boost before they could depart, but I saw no calls for service. A company van was standing by just in case! Fortunately, the temperature at sunset on the Friday I attended was a comfortable +8C, so no one needed to turn on their heaters.

Both singers have had professional opportunities, including engagements with Edmonton Opera, and they are currently participating in the Edmonton Opera Emerging Artists Studio program, which is funded by the Edmonton Community Foundation. Unlike Calgary Opera, Edmonton Opera doesn’t have a typical emerging artists program per se. 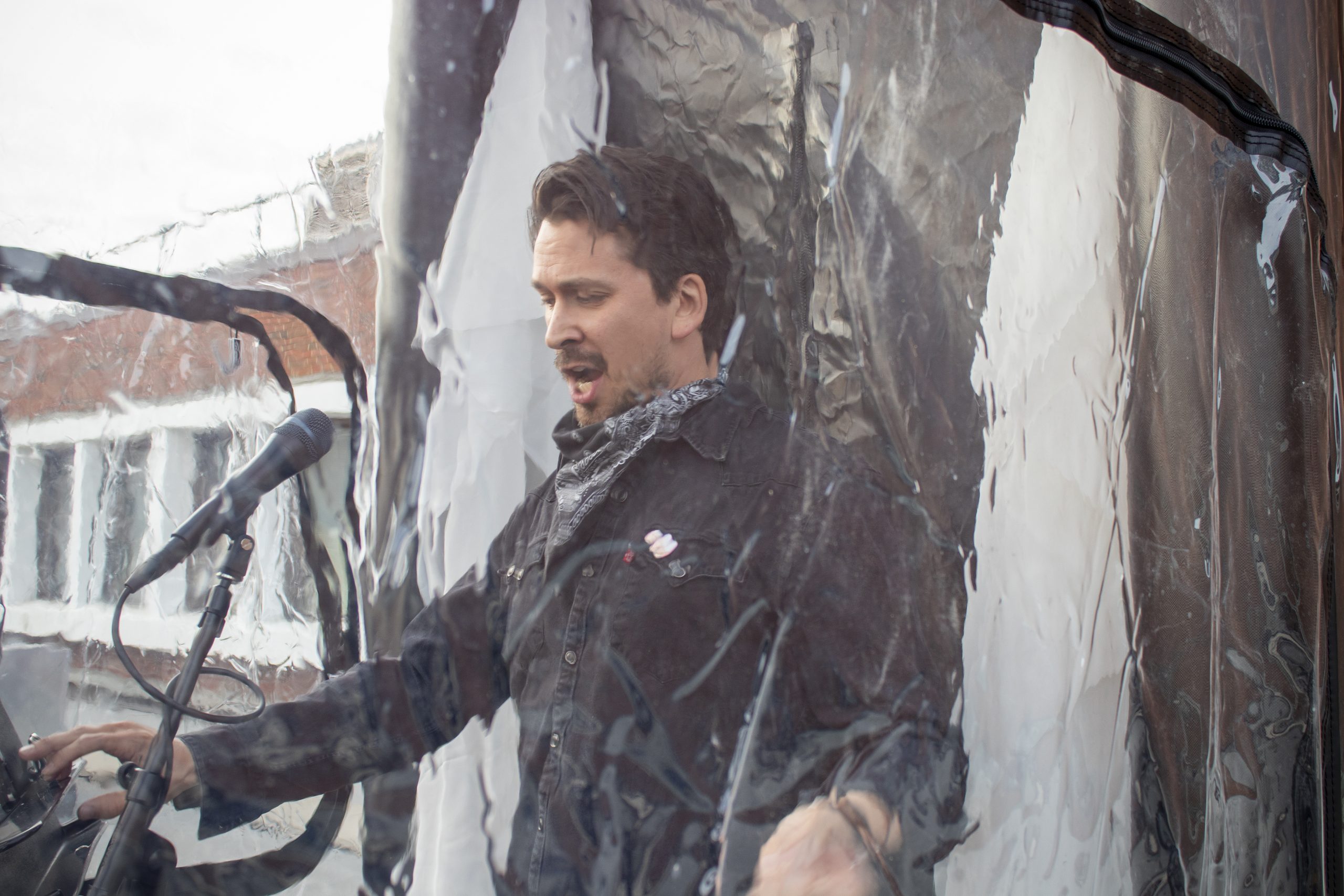 Sloan and Fitzgerald alternated between solos and duets, and both have nice voices, stronger in their midranges on this evening. Fitzgerald’s rendition of Vaughan Williams’ “Silent Noon” was especially sweet, and Sloan had her own fine moments of polished singing. The eight songs that weren’t from operas included a mix of art song and classically flavoured folk. The production quality through the speakers in my 2008 Toyota Rav4 was as good as any radio broadcast, and there was, of course, no issue with a tall person’s big head blocking my view.

The whole Drive-in Opera experience was comfortable and enjoyable, and the audience, after each song, honked their enthusiastic approval.