Opera Niagara’s fourth season opened with La bohème, given four performances at Southminster United Church in Niagara Falls. Bohème is consistently one of the most performed operas in the world—this season alone saw the bohemians’ return to AtG and Calgary Opera—and its familiarity often breeds contempt resulting in sometimes disastrous gimmicks designed to shed new light on Puccini’s masterpiece. How can a performance be memorable while also sticking to Puccini’s original vision of a 19th-century vignette? Artistic Director Aprile Millo and General Director Maria Vetere land on a crafty solution in highlighting their intimate knowledge of the piece. In between set changes, Maestra Millo shared details of studying with Puccini’s granddaughter, Simonetta Puccini, also sharing insight on the nature of Puccini’s musical style, his personal character, and Opera Niagara’s love of the bel canto art form. Rather than detracting from the performance, this narrative made the production a musical as well as pedagogical delight. 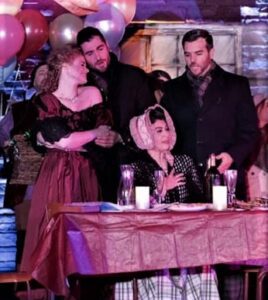 Vetere’s performance reinforced Simonetta Puccini’s assessment of her as “the absolutely ideal Mimì.” Her “Si, mi chiamano Mimì” kicked off an evening of beautifully sung and sensitively acted opera. Everything—from her phrasing to her spot on pronunciation to her exquisite dynamics—lived and breathed Mimì. As her Rodolfo, Joel Ricci was equally mesmerizing.  Never at any point did his relative inexperience show, even when singing alongside seasoned veteran Vetere. Ricci’s voice gained strength throughout the evening with ringing top tones and emotionally sensitive colouring. Mimì’s death scene was heartbreaking and extremely well acted, especially so when Ricci picked her up from her deathbed and cradled her lifeless body in his arms. 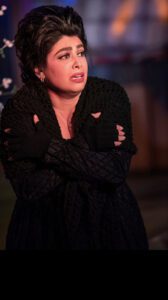 As Marcello, Alexander Leigh was sonorous, and at his best dramatically when sweeping Musetta up in his arms or passionately embracing her at the end of Act III. Emily Casey’s Musetta was a red haired vixen with a sparkling voice. The supporting cast was admirable with Anthony Bellisimo (Colline), Mario Morales (Schaunard), Henry Irwin (Alcindoro/Benoit), Daniel Abadie (Parpignol), and 11-year-old soprano Gioia Bonifacio-Proietto all coming through effectively. Although the chorus was heavy on sopranos, they were enthusiastic, in synch, and dramatically powerful; particularly the women, showcasing beautiful tonality at the beginning of Act III. The children’s chorus was delightful and the inclusion of trumpeter Dave Wilson in Act II was creative and festive. Pianist Adolfo DeSantis and conductor Millo provided the singers with a strong foundation, precise during chorus work and wonderfully fluid during more lyrical passages.

The sets were simple yet very effective. Rather than have the artists leaping across a ridiculously large garret space, the crammed quarters of the front of the church worked convincingly as an artist’s loft while the aisles and narthex were creatively used in scenes requiring crowds. The audience was provided with French flags for Act II and encouraged to wave them, adding to the celebratory sense of the scene. The surtitles (in a new translation by Vetere’s student, Danielle DiStefano) were cleverly set up like silent movie inter-titles, with descriptive scene details at the beginning of each act.

Much has been written about the strength of Puccini’s female characters and their prominence in his artistic works. With the exception of the instrumentalists and the lighting and technical director (Christopher Johnson), Opera Niagara’s La bohème was created by women. Perhaps this is what made this production so emotionally tangible; the stage manager (Leasa Paquette), the prop coordinator (Cathy Teves), the makeup artist (Brandi Ricci), the assistant director (Alyssa Epp), the chorus director (Lindsay Duggan), the Artistic Director (Millo), and the General Director (Vetere) are all gifted artists. To quote opera legend Beverly Sills, “There is a growing strength in women but it’s in the forehead, not the forearm.” Opera Niagara’s creative team is a testament to these belated but encouraging shifts, and yet another sign of women taking on an increasingly frequent role behind-the-scenes in opera.