Toronto Operetta Theatre ends its 17/18 season with the popular French operetta, La belle Hélène (The Beautiful Helen) by Jacques Offenbach. Now in its 33rd season, TOT shows are typically drawn from the standard repertoire, but with a surprise or two thrown in every so often. Calixa Lavallée’s The Widow which opened their season is a good example of the latter. TOT shows are invariably high-spirited, sung by youthful voices, and deftly conducted and played by its tiny orchestra. Under the directorial hand of Guillermo Silva-Marin, his shows always tickle the funny bone, with a hearty serving of slapstick.

Seen on opening night (Apr. 27), this Offenbach gem is no exception. The Beautiful Helen has lots of pretty tunes and guaranteed barrels of laughs—a fitting, fun-filled way to end a season. The set, as typical for TOT, is quite simple, tastefully decorated with quasi-Grecian urns and columns. The Malabar-supplied costumes are colourful if not the most historically authentic. 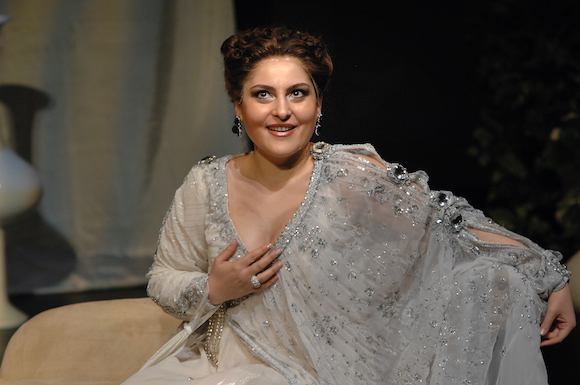 In Greek mythology, Helen of Troy is married to King Menelaus of Sparta but elopes with Prince Paris of Troy, thus starting the Trojan War. The historical events surrounding Helen and associated personages have inspired many novels, movies and operas. Among the many operas are Die ägyptische Helena (R. Strauss), Les Troyens (Berlioz), Dido and Aeneas (Purcell), Il ritorno di Ulisse in patria (Monteverdi), and of course, La belle Hélène. Every one of these are regularly performed—in fact, the Monteverdi is currently being staged by Toronto’s Opera Atelier.

Given that Helen is called ‘the most beautiful woman in the world,’ the title poses a daunting challenge for any singer brave enough to impersonate her. For better or for worst, 21st century audiences expect singers to look the part, ‘beauty inside’ notwithstanding. Turkish-Canadian mezzo Beste Kalender was every inch the glamorous diva, sang with luscious tone, and acted up a storm. To some, her ultra-flamboyant Hélène might appear over-the-top, but given this is a comic piece, sure, why not!

She was well partnered by the Paris of Canadian tenor Adam Fisher, looking like a sexier Greek version of L’il Abner in his extravagant warrior outfit.  He sang well, with attractive tone, albeit slightly pushed at the top. Kudos to him for an excellent ‘Paris disguised as High Priest’ scene in Act III. 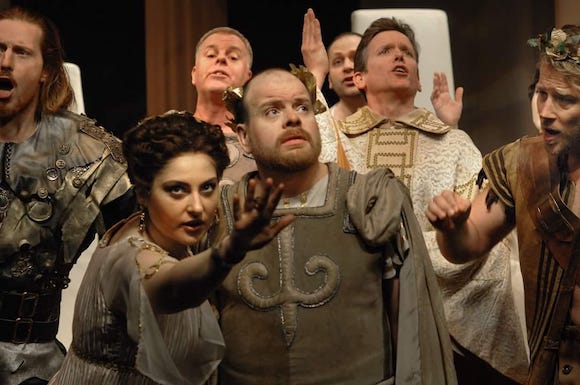 Buffo baritone Gregory Finney, a TOT regular, was totally irrepressible as Menelaus. He may not have the most distinguished baritone, but this artist always cracks up an audience. Brussels-based Canadian baritone Matthew Zadow was under-utilized as Calchas, but he took advantage of his few brief moments to make a strong impression. This is an ensemble piece with over a dozen solo roles, and all the supporting roles were cast from strength, particularly Lynn Isnar (Daphne), David Boan (Achilles), Stuart Graham (Agamemnon) and Cian Horrobin (Orestes).

TOT audiences know what to expect from the directorial style of Guillermo Silva-Marin. He invariably adds wildly topical references in his updating of the dialogue. He outdid himself this time by managing to work in a mention Facebook (!) into an antique story about Helen of Troy.  His choreography typically has an Off-Broadway/G&S feel, and this show is a good example. The outrageous dance number listed in the program as the “Patriotic Trio,” for Menelaus, Agamemnon, and Calchas was beyond hilarious.

Musically, the show was in good hands with Peter Tiefenbach at the helm, who managed to make a tiny, 9-musician orchestra sound good. He led a well-paced reading of the scintillating score. Acts II and III were slightly cut and combined, leaving just one intermission. This is a perfect show to lift the spirits of a winter-weary Toronto audience. There are two more performances—Apr. 28 at 8 pm and Apr. 29 at 3 p.m. at the Jane Mallett Theatre, Toronto.