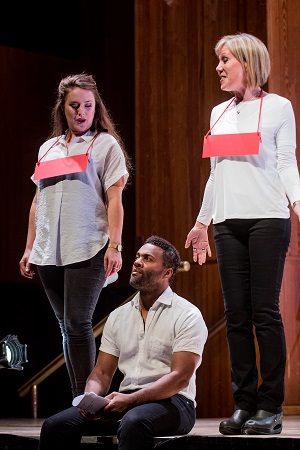 Do we need to know the political context in which a work was created in
order to fully appreciate its ‘worth’? Does that political context need to
be made ‘relevant’ to present audiences? There are no simple or ‘right’
answers to those questions, but in the light of director Daisy Evans’
decision to entirely discard Dryden’s original text for this performance of
Purcell’s semi-opera with the Academy of Ancient Music and to offer in its place    something abstract and topical – ‘King Arthur in the Age of Brexit’ – it might be            worth reflecting on the work’s origins and allegories. Evans’ declares that her      production ‘isn’t about King Arthur the legend, it’s about the idea of King Arthur’                – but isn’t the latter just what Dryden and Purcell were reviving and engaging
with, too?

So, a brief re-cap. In the 1680s the Civil War was still a recent memory,
and political and religious divisions had the potential to re-ignite. As
the 25th anniversary of Charles’ restoration neared, plans were
made to celebrate it through grand architectural and artistic projects. A
new palace was built in Winchester, designed by Sir Christopher Wren, the
foundations of which were said to stand on the remains of the
castle that had been home to the court of King Arthur: the ceiling of its
great ‘St George’s Hall’ was lavishly decorated with a painting of Charles,
the north wall presented Edward III and the Black Prince, while at the west
end was St George and the Dragon.