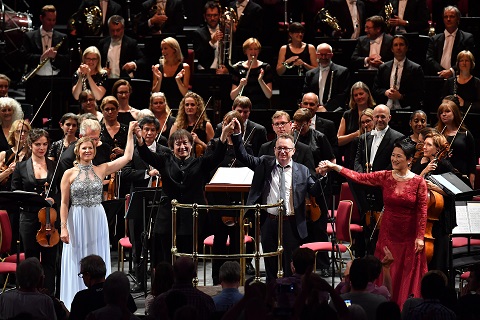 At this Proms performance, the first outside Japan, soloists soprano Sally
Matthews and mezzo-soprano Mihoko Fujimura were joined by the BBC Symphony
Orchestra, Finchley Children’s Music Group and the New London Children’s
Choir under the baton of Kazushi Ozo, who conducted the premiere in
November 2016.

Ozo drew fine and committed performances from all involved but I found this
work ‘of commemoration, consolation and contemplation’ rather unengaging
and unaffecting. This is partly, I think, because Turnage’s seven movements
place assorted contexts and circumstances side by side – a natural
disaster, a WWII bombing raid, the deaths of innocent children, the tragic
culmination of a love-suicide Bunraku play – without convincingly making
such moments cohere, and without really penetrating through the cultural
surface. What does a tsunami have to do with an incendiary raid on Tokyo?
How can a chain of six musical ‘threnodies’ offer any real consolation for
such terrible loss of life of an almost unimageable scale? And, what are we
to make of the ‘Suntory’ Dance which they frame – is it a celebration, a
dramatization, a ritual?

Moreover, what sort of musical language and form should any such
‘consolation’ assume? Turnage’s orchestral score is characteristically
lively, with syncopations vying with jazzy grooves, and the large orchestra
– especially the percussion and brass – is exploited to kaleidoscopic
effect. There are also meditative vocal passages which offer contrast. But
there’s a disjuncture between Turnage’s orchestral vernacular and the texts
presented in four of the movements, which range from English translations
of various Japanese texts – Sō Sakon’s ‘Hashitte iru’ (Running) and an
excerpt from Chikamatsu Monzaemon’s The Love Suicides at Sonezaki
– to, conversely, the Japanese variant of the nursery rhyme, ‘Twinkle,
twinkle, little star’ – ‘Kira, kira hikaru’.

The first two movements are orchestral though, and depict two prefectures –
Iwate and Miyagi – which were hit by the 2011 tsunami. ‘Iwate’
starts with a repetitive, fragmented pattern which, picked up by the brass
and percussion, rapidly escalates into a dynamic whirl of high woodwind and
trumpet contrasted with swelling strings. Dove-tailed blocks of sound
provide unceasing variety of texture, until the ominous pounding of the
timpani threatens disintegration, and spaces open up with low growling
trombone juxtaposed with piercing piccolo. A jazzy syncopation suggests a
grotesque dance of death which spins into oblivion. ‘Miyagi’ opens
quietly; eerie moans creak and float over the sound string lines, presaging
the disturbing, violent orchestral stabs which fracture the silence.

The two soloists are introduced in the third movement and present Sō
Sakon’s poem, from his collection Mother Burning, which describes
his experience as a child of trying to escape – ‘running through the sea of
fire a road of fire’ – after the death of his mother in an incendiary raid
in 1945. The dancing trumpet heralds a siren, marking the two soloists’
anxious repetitions of ‘running’ and ‘mother’ which build to a panicking
climax. Both Matthews and Fujimura projected their short intertwining
phrases with power and focus against the brass outbursts – suggestive of
roaring, surging flames – until subsumed by a clamouring orchestral wave.

The solo clarinet coaxed the children’s chorus into a sweet-toned rendition
of the nursery rhyme, the brightness of the vocal colour and the sparseness
of the orchestration serving to cleanse away the violence of the preceding
movement, as the celestial body offers assurance to star-gazers and
guidance to night-time travellers. The unfolding stanzas were accompanied
by increasingly animated textures, culminating with Matthews’ glowing
statement of wonder at the nature and significance of the bright and tiny
spark.

The ‘Suntory Dance’ followed, starting darkly but gradually stirring up
primal energies and skipping exchanges between percussion, low strings and
horns. Both Turnage and the BBCSO players showed their rhythmic precision
and virtuosity in this inventive dance which, even when full brass shone
forth and the violins soared high, never quite assumed a celebratory air.
(An incidental side-note: Hibiki, or ‘Japanese Harmony’ is a brand
name of a blended Suntory Whisky, which the renowned distiller
remarks ‘was launched in 1989 to commemorate Suntory’s 90th anniversary,
and has ever since been embraced as the paragon of The Art of Japanese
Whisky, the very product of Japanese nature and her people’ – which if
nothing else demonstrates the potential for cultural misappropriate and
disjuncture.)

Fujimura sang ‘On the Water’s Surface’ with beautifully shaped phrasing
which captured the melancholic rapture of the text, enhanced by sensitive
clarinet solos and underpinned by nudging bass gestures. There is a
coolness about the instrumental timbre, fittingly so, for this time the
stars lead to the ‘joy beyond extinction’. The elegiac mood was sustained
in the final section, ‘Fukushima’, in which the children’s chorus spun
melismatic repetitions of the name of nuclear power plant which, following
the tsunami, experienced three nuclear meltdowns and hydrogen-air
explosions resulting in the release of radioactive material second in
quantity only to the Chernobyl disaster of 1986. It certainly made for a
meditative end, but the children could really have been repeating any
single word to produce the same effect.

In the first half of the Prom, we heard two French impressionist
masterpieces, but neither quite made their full mark. Debussy’s Prélude à l’après-midi d’un faune was beautifully played –
delicate, precious, silkily assuaging – but conveyed little of the
emotional highs and lows of the narrative of the faun’s insouciant pan-pipe
gambolling, rapturous arousal by the passing nymphs and naiads, and
exhausted abandonment to vision-fuelled sleep. It’s almost impossible for
Ravel’s G major Piano Concerto not to win over an audience and, making his
Proms debut, Israeli pianist Inon Barnatan gave a refined performance of
effortless virtuosity, skipping lightly through the fancy passagework. But,
while Barnatan’s technique may be flawless, Ozo needed to draw a dash more
jazzy vitality from the BBCSO to balance the lyrical wistfulness. The
‘Classical’ simplicity of the slow movement worked its unaffected charm,
and the cor anglais provided the requisite nostalgic tints, but the
whip-crack buzz was missing from the finale. It took an encore –
Mendelssohn’s Rondo capriccioso in E major Op.14 – for us to have
opportunity to enjoy Barnatan’s full expressive range and depth, from
elegance to bombast, from majesty to impishness.

One other small observation to conclude: the expressive narrative and unity
of both Ravel’s concerto and Turnage’s Hibiki were disrupted by
the Prommers’ habit of applauding every movement. Concentration and
coherence are both aided by silence.