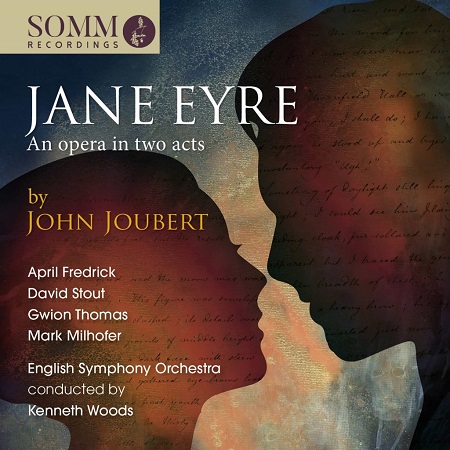 Composers tend to steer clear of sprawling nineteenth-century tomes, with
their vast casts of characters and complex engagement with contemporary
social concerns. As far as I know, no-one has yet been brave, or foolhardy,
enough to turn Vanity Fair or À la recherche du temps perdu into an opera, although Prokofiev didn’t let the 1500 page-count of War and Peace put him off.

Composer John Joubert, who celebrated his 90th birthday this
spring, is best known for Christmas carols such as ‘Torches’ (1951) and
‘There is no rose of such virtue’ (1954) which have become staples of the
festival season. But, Joubert’s oeuvre is in fact extensive and
wide-ranging, comprising over 180 opus numbers: from operas – including
adaptations of George Eliot’s Silas Marner and Joseph Conrad’s Under Western Eyes – to orchestral works, concertos, chamber music, instrumental works, and both small- and large-scale choral pieces.

The South Africa-born, UK-domiciled composer has – according to David
Wordsworth’s account of Joubert’s achievements in the March/April issue ofChoir & Organ magazine, which is reproduced on the composer’s website – long found literature a
stimulus to his musical creativity: ‘The long and varied list of writers he
has drawn on (some notoriously hard to set to music) includes Emily Brontë,
Donne, Lawrence, Shakespeare, Yeats, Hopkins, Hardy, Rossetti, Mandelstam,
Ruth Dallas, Chesterton, and Crashaw, as well as Psalm settings and
numerous medieval texts.’

For ten years of his 70-year composing career, Joubert worked on an opera
adapted from Charlotte Brontë’s Gothic romance, Jane Eyre. An
adapted version was mounted by Opera Mint in 2005 but it was not until
October 2016 that the opera – which Joubert had revised further into a
two-act structure – received its official ‘world premiere’ at the Ruddock
Performing Arts Centre in Birmingham. That concert performance, by the
English Symphony Orchestra under the baton of Kenneth Woods, was recorded
and released by SOMM in January this year.

Librettist Kenneth Birkin has focused on Jane’s adult life, which deprives
us of the first stages, at Gateshead and Lowood, of Jane’s progress through
Brontë’s Bildungsroman but which sensibly makes Jane’s romantic trials with
Rochester and St John Rivers the central concern. Each act is divided into
three scenes. Act 1 begins on the eve of Jane’s departure from Lowood and
journey to Thornfield, where she takes up her position of governess. Scenes
two and three juxtapose Bertha Mason’s attempt to murder Rochester by
setting his bed alight, with a garden scene in which Rochester and Jane
declare their love for each other. Act 2 begins with the disruption of
their wedding ceremony by Bertha’s brother, before the action shifts
forward one year and presents Jane in the parlour of the Rivers’ cottage at
Whitecross where she has been given refuge. When St John attempts to
persuade Jane to join him, as his wife, as he departs for missionary work
in India, she desists and, haunted by Rochester’s anguished cries, ‘Jane!
Jane! Jane!’, returns to Thornfield where the final scene sees her reunited
with the now blind Rochester, who is at last free to marry her.

We learn less about the physical and emotional abuse that Jane experiences
at the hands of the Reed family, Mr Brocklehurst and Blanche Ingram, and we
lose some of Brontë’s cast of characters, including Jane’s childhood
friend, Helen, and the secretive, sinister Grace Poole. But, though the red
room episode would surely have made for a terrific set-piece, there are
several other scenes and passages which provide vivid theatre, including
the instrumental interlude which evokes Bertha’s midnight progress towards
Rochester’s bed and the interruption of Jane’s wedding by Bertha’s brother
before a morally outraged congregation.

Indeed, the latter scene breaks the opera’s prevailing pattern of duets and
short monologues. The scene begins with orchestral bustle, the brass and
timpani suggesting preparations for a public nuptial ceremony as well as
sounding a more ambiguous and ominous note. The declamatory lines in this
scene are Britten-esque: they brought to mind the trial scene at the start
of Peter Grimes, when Swallow summons Grimes into the dock, and
the censorious condemnations of the massed voices – ‘Bigamy!’, ‘It’s little
short of sacrilege!’, ‘In God’s house too’ – are no so far from the
Borough’s hypocritical denunciation of Grimes.

However, so much of the power of the novel depends on the strong
first-person narrative, through which the reader seems almost to connect
with Jane’s inner consciousness. As Jane, April Fredrick sings the opera’s
first words, joins with Rochester in a transcendent union at the close, and
is pretty much a constant participant in the action. And, both Fredrick’s
gleaming, focused soprano – which soars through Joubert’s lyrical lines –
and her vocal stamina are admirable.

The opening scene reminds me of the Governess’s first utterances in
Britten’s The Turn of the Screw, for the sweetness of Fredrick’s
sound suggests Jane’s eagerness and lack of worldly experience, though as
her soprano swells powerfully, the strength of Jane’s inner spirit is also
conveyed. As the opera unfolds, Fredrick’s communicates the full range of
Jane’s rapidly changing and diverse emotions. She is not intimidated by
Brocklehurst when he insists that she remain at Lowood, resisting his
overbearing menace as intimated by the orchestral surges and stabs, and by
the dark tone colours of low brass, strings and timpani. During her early
exchanges with Rochester, one senses Fredrick’s voice growing in focus and
presence as Jane matures and becomes conscious of her burgeoning love.

The garden meeting in which they voice their true feelings is tender, the
static harmonies and woodwind murmurings evoking both the tranquillity and
expectancy of the summer evening. Later in the scene, the more sensuous
colours and harmonies, the lilting rhythms and the horn’s mellifluousness
imbue their overlapping lines – ‘lay your head upon my breast’ – with
quasi-erotic emotion, which strengthens further as the two voices come
together in wonder, ‘Is it a waking dream?’ Jane’s duets with St John
Rivers are no less captivating: Fredrick is eloquent in resisting his
domineering insistence that she must join him in India, and when Jane hears
Rochester’s distant voice, calling her name, she finds the strength to
retain her integrity as the horn sings a gentle reminiscence of their
former love.

The characterisation of the entire cast is strong and communicative. David
Stout’s firm baritone suggests Rochester’s masculine confidence and
authority, though shades of darkness intimate inner troubles which
sometimes find expression in outbursts of Claggart-like self-pity and
frustration: ‘Fate has brought me home’, he despairs when reflecting on the
‘demon from pit of hell itself’ which separates him from his beloved Jane.
But, the snarling rasp, ‘hell’s gate’, is quelled by images of Jane’s
‘sweetness – innocence’, and Stout’s voice softens tenderly. Later, blinded
by the Thornfield fire and alone in the overgrown garden, Stout shapes his
low utterances to suggest Rochester’s sad resignation and exhaustion,
though as he recounts the tale of Thornfield’s destruction his baritone
burns with yearning – ‘Jane, where are you now? I miss you so.’ – and then
angry misery: ‘Am I forgotten then?’ The joyful warmth of the impassioned
reunion scene leads to a transcendent closing duet.

Gwion Thomas’s Brocklehurst is imperious and domineering, his enunciation
crisp and commanding; one can easily picture a nineteenth-century autocrat
accustomed to seeing women and children cower in response to his bullying
decrees. St John Rivers is sung by Mark Milhofer, whose penetrating tenor
suggests a man driven by missionary zeal and contrasts strikingly with the
delicate adorations of his sisters Diana and Mary. The diction is uniformly
excellent and the singers are never overwhelmed by the orchestral fabric,
the textures of which are lucid, allowing the many evocative instrumental
details to be remarked.

A forty-page booklet contains both synopsis and complete libretto, as well
as essays by Joubert, Kenneth Woods and Christopher Morley; the latter’s
interview with Joubert is included at the end of CD2 and provides an
intriguing supplement. The recording is bright and clear, and there are no
‘intrusions’ from the live audience.

Joubert has remarked, ‘The criterion I use for the selection of operatic
subjects is that they should comment in some way on basic human issues,
thus bringing them into line with the Enlightenment idea of theatre as a
‘School of Morals’’. Indeed, some might argue that Brontë’s novel verges on
the didactic, with the characters experiencing a series of ethical crises
in a world where morality and romantic love seem to be mutually exclusive.
However, at the close, though it’s perhaps not clear whether Jane’s
decision to return to Rochester is driven by her morals or her emotions,
the final scene of Joubert’s opera sees the beloveds’ souls ‘joined as one
… before God’s throne’. But, if there is peace and reconciliation at the
close, then Joubert’s opera certainly makes tangible what Virginia Woolf
described as Jane’s very modern sense of ‘self’, as she ‘resist[s] all the
way’. In so doing, Joubert’s Jane Eyre communicates much about the
particularities of individual human experience.