Liz Upchurch, The Rubies 2019—Giving Voice to the New

English pianist, coach, and mentor Liz Upchurch has much to celebrate this season. 2019 marks her 20th year as Head of the Canadian Opera Company Ensemble Studio—a position that has confirmed her place as a central figure and mentor among Canada’s opera artists.

It’s a smooth transition then, for an influential figure like Liz, to her second distinction of the year, as an honouree at the 2019 Opera Canada Awards, which recognize outstanding contributions to Canada’s opera scene. That’s Liz to a tee, and she’s in good company alongside fellow 2019 honourees Benjamin Butterfield, tenor and vocal pedagogue, and composer John Estacio.

Like any true pianist, Liz acknowledges the 2019 ‘Rubies’ with a good dose of humility. “It is an honour, really. It is an honour to be thought of in that way.” On the big night—November 4th in Toronto—she’ll be there among friends and family, a cheerleader for her colleagues as much as an honouree herself.

“I find award ceremonies in the arts difficult, in general,” she admits, “because to me, art is a necessity, not a luxury.” Still, she’ll happily attend, and her first priority is to keep her emotions in check— especially during the annual performance by the Canadian Children’s Opera Chorus (CCOC). “Any children’s chorus absolutely melts me down to nothing,” she smiles.

Nicknamed the ‘Rubies’, the Opera Canada Awards are named after Ruby Mercer, founder of both Opera Canada magazine in 1960 and the CCOC in 1968. “I wish I’d known Ruby, to know her and understand the impact she had on the music scene was enormous,” she says. “She was just a powerhouse.”

Indeed, Liz arrived in Canada as part of the generation that followed Mercer. Her first visits in the early 90s were to the famed Banff Centre for the Arts, under mentors who represented opera’s top tier. Her initial summer was with Martin Isepp, the British pianist and conductor known for his work on Mozart and Britten. His training was steeped in Mozart and the foundational style that comes from working on Mozart’s operas. “Martin, he was very traditional,” Upchurch says. “He was the gold standard of playing.”

Liz returned to Banff soon after for a winter workshop on contemporary opera, led by Dr. John Hess, pianist and co-founder of Queen of Puddings Theatre, and a staple figure of new opera in Canada. “This was the absolute opposite,” she recalls. “It was turning everything on its head, using pieces of music that you’re not even sure which way is up.”

“I’d never worked in that way,” she says of the boundary-breaking music she discovered with Hess. “It’s a sort of conversion course, in a way. But it was absolutely thrilling. I thought, wow, Canada is on the cutting edge of this music.” 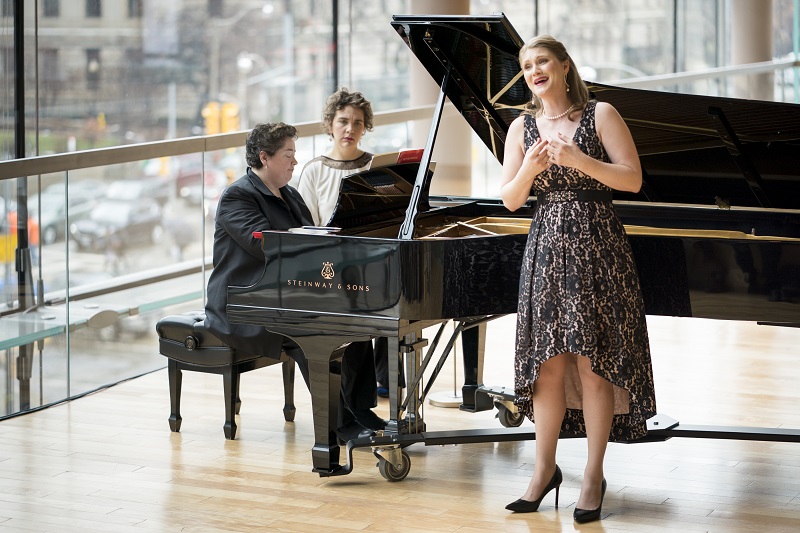 Representative of the spectrum of style in Canada’s opera scene, Liz’s two visits to Banff made an enormous contrast, and proved enough to break down her perception of opera as an art form. Like many did and still do, she associated it with elitism and money; yet with less than a year of exposure, she discovered that opera—particularly opera in Canada—was being “written by the people, for the people.”

That first summer spent luxuriating in Lieder with Isepp, Liz also met many of her future colleagues: Mary Morrison, Michael McMahon, John Hess, and her soon-to-be-partner, Jennifer Tarver. For opera’s younger generations it was a fateful encounter of influential figures, and a small piece of Canadian opera history.

“I thought, wow, Canada is on the cutting edge of this music.”

Her time in Banff also marks the beginning of an educational approach that has since become standard. Liz brings to her young artists dual passions for the traditional and the boundary-breaking, and it’s no coincidence that after two decades of Liz’s mentorship in Canada it’s become the norm for professional singers to be fluent in both the old and the new of opera.

“Absolutely, there’s a massive tide change,” she says of the current generation of singers and their brave approach to contemporary repertoire. “They’ve been exposed to it, they don’t see it as something so fearful. It’s simply something they want to do.” She has been a major force behind that exposure, doling out new and brand-new repertoire wherever she sees a chance. In only the last handful of years she has headed projects highlighting music by Kaija Saariaho, Olivier Messaien, and Canadian Ana Sokolovic—all under the auspices of her work with the COC’s young artists.

That shift is rooted in education, a long-lasting advancement in the training of operatic artists, and has become an enduring part of Liz’s contribution to opera in Canada. When asked why she’s earned a place among the 2019 honourees of the Opera Canada Awards, she is predictably modest about it, but admits a sort of instinctual capacity for her work. “I’m a natural collaborator, and I’m also a natural nurturer,” she says. “The two things go hand in hand.”

“I’m working in an ever-changing educational situation, where we try to meet the needs of the people that are there. That’s endlessly fascinating,” she says, earnestly. “I have to pinch myself at the end of some days.”

Soprano Wendy Nielsen will be presenting the ‘Ruby’ to Liz Upchurch on Nov. 4th in Toronto.