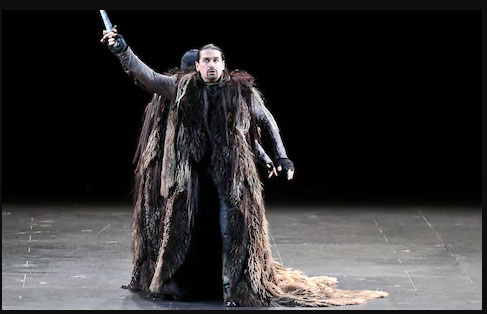 Festival theatre, Edinburgh
This new production from Teatro Regio Torino has a solid cast and striking imagery backed by a richly nuanced account of Verdi’s score

Verdi’s take on the Scottish play was the first opera to be performed at the inaugural Edinburgh festival, which is why it makes an appearance at the festival’s 70th anniversary celebrations. Not that there’s a lot of Scotland in evidence in this new production from Teatro Regio Torino and music director Gianandrea Noseda, which opens the company’s week-long residency in Edinburgh. Emma Dante’s production exudes a general northern modishness, with more than a hint of Games of Thrones about Vanessa Sannino’s costumes. This is apparent from the outset when Dalibor Jenis’s ponytailed, fur-clad Macbeth rides in on a skeleton horse. There’s little set to speak of; rather, the production is an exercise in chiaroscuro, with Cristian Zucaro’s lighting providing an eerie backdrop against which the witches writhe and plenty of dark corners where assassins can hide.

Given the two decades that divide its creation and the later revisions, Macbeth is far from a musically homogeneous work – something emphasised here as Noseda mixes liberally from the two versions. It’s a disparity that finds its visual analogue in the production. Scenes of high camp – jauntily marching soldiers and tumblers – contrast with moments of stark simplicity, particularly the act 4 opening chorus of exiled Scots lamenting the fate of their homeland. While there are some striking ideas: the crucifixion imagery following Duncan’s murder, there are also misjudgments: the automaton hospital beds following Lady Macbeth around during the sleepwalking scene.

Aida: Against the odds at Teatro di San Carlo, Naples