Opera Atelier’s production of Purcell’s Dido and Aeneas which opened last night at the Elgin Theatre is essentially a remount of their 2016 production though shorn of the prologue created for that version. This cuts the piece to the normal 65 minutes or so and allows it to be played without an interval.

Other features of the staging are retained such as the children’s chorus supplementing a small male adult one singing from the stage boxes. I assume the use of children is a nod to the old story that the piece was written for a school for young ladies which seems particularly odd when the production presents as something much closer to a court entertainment in the French style!

For yes, this is Opera Atelier and the dancers are on stage most of the time with the usual choreography one either loves or doesn’t; including the castanet number. The red coated sailors and the tenor with a ship on his head as the Sailor (this time Spencer Britten) are back too. The baroque stage machinery effects are full on especially in the storm scene. So what’s different this time?

The biggest difference is in the casting. Meghan Lindsay is much better as Dido than as Belinda. She’s very good and her darkish voice lends a gravitas to her character that didn’t work so well with Belinda. Mireille Asselin’s much brighter voice is then both a pleasing contrast and more appropriate as the younger sister. Add a strongly sung tenor Aeneas from Colin Ainsworth, and some real chemistry, and one has an effective and moving trio at the heart of the story. The acting, of course, is highly stylized but they manage to create some real emotional depth with, finally, an effective confrontation between the (ex) lovers leading to a very simple and rather beautiful staging of the Lament with Lindsay alone (no dancers!) on stage with the lights fading. 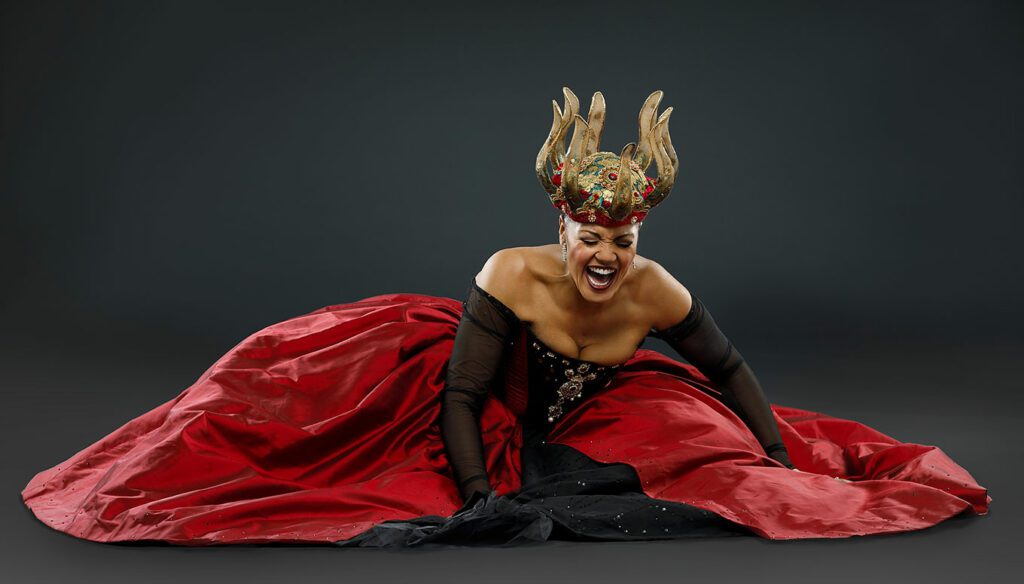 The bigger change might be in the casting of the witches. Measha Brueggergosman-Lee goes to town as the Sorceress both vocally and physically. She’s backed up by the highly energetic, even acrobatic, pair of Cynthia Smithers and Danielle Macmillan as her sidekicks. There’s some classy singing here as well as great comic acting. All three are clearly having a lot of fun and the audience loved it. Dramatically it was quite effective as an almost farcical “let’s conjure for a storm” led straight into the final scene with the emotional contrast heightening the pathos.

There’s quite a small orchestra conducted by David Fallis. There are only ten musicians including two harpsichords and percussion. This creates quite a light sound and maybe allows a little more rhythmic flexibility than a larger band. Co-ordination between stage, pit and chorus in the boxes was problem free.

So Opera Atelier joins the growing band of companies returning to live performance with a short but well sung and satisfying show.

Opera Atelier’s iconic production of Dido and Aeneas returns to the Elgin Theatre. Henry Purcell’s perfect masterpiece is drenched in longing as Dido’s obsession with the Trojan prince Aeneas plays out against a backdrop of relentless fate and magic.

Opera Atelier shares a graphic novel of Dido and Aeneas, written and illustrated
by Jessica de Bruyn and Meredith Wolting. To read it, click here.
‍
There is a Pre-Performance Chat Series!
These talks begin 45 minutes before curtain and last approximately 20 minutes.
Pre-Performance Chats can be found in the lower lobby of the Elgin Theatre. Seating available.