I’d very much missed Opera Lafayette, whose annual visits to New York from its homebase in Washington DC had been highlights of my pre-Covid decade of opera-going. The company had its ups and its downs, but one thing was utterly consistent: its commitment to unearthing obscure but worthy works—the bulk of them from eighteenth-century France—and dusting them off for a twenty-first-century public.

So I was eager to greet its two-years-belated return to Manhattan on June 7, when it presented André-Ernest-Modeste Grétry’s 1770 opéra comique Silvain to launch a three-day mini-festival it dubbed “The Era of Marie Antoinette, Rediscovered,” at the handsomely restored theater of the Museo del Barrio on upper Fifth Avenue. Silvain was a favourite opera of the queen’s, and the festival’s second evening explored music she might have heard in her musical salon; the third traversed the Atlantic for a “concert spirituel” of music from the French Caribbean. The musical bill of fare was admirably well considered; there were helpful ancillary lectures and panels and a handsome program book, expertly annotated and amply illustrated.

I missed nights two and three, but I’ve a strong hunch I’d have enjoyed them more than I did the feature attraction on night one. The problem wasn’t with Silvain itself, which is charming and tuneful and a good exemplar of its pastoral genre; it was with the production, which transplanted the setting from rural France to the southern Colorado of the first half of the 1800s in a misguided attempt to juice up its “relevance” to an American audience of today. True, the plot—pitting virtuous farmers against venal upper-class landowners—has its serious undertones, but at its core Silvain is a sentimental comedy: the stakes aren’t high, and we’re not for a second in doubt of a happy outcome. Two years back, the pandemic still in high gear, Lafayette staged Philidor’s roughly contemporary The Blacksmith at an actual ranch in Colorado, for a small, socially-distanced live audience, and streamed it for the rest of us: the Wild West transplant worked deliciously well—there was no attempt at “relevance,” just an eager bid to entertain. That it did so rousingly while Silvain fell fairly flat reflected the wide discrepancy between what Lafayette had been telling us about its “path-breaking new staging” of Grétry’s opera and the mild diversion we actually saw and heard. Tania Hernández Velasco, its director and designer, created some nice tableaux but repeatedly undermined herself with perpetual-motion projections (all those leaves and flowers and wheat blowin’ in the wind!) and an equivalent excess of action; if she took this opera truly seriously, would she have staged it so broadly and busily, without a whit or a whiff of danger? Characters were assigned Spanish-equivalents of their names—Hélène, for example, became Elena—but like the rest of this transatlantic “makeover,” it made no perceptible difference at all. 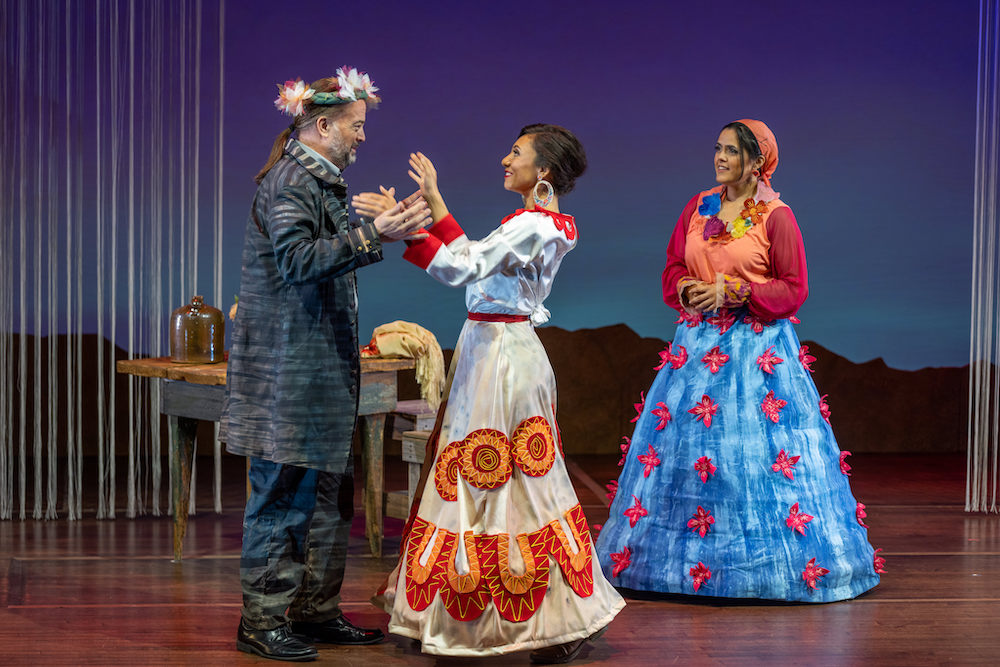 Or maybe it did, in some colorful Mexican-flavored costumes and in the casting: instead of Lafayette’s usual native Francophones, there were two Hispanic sopranos and—the weakest link—a Hispanic tenor, whose ethnicity availed them little in their delivery of either the sung text (in French) or the spoken dialogue (largely in English). In fact, for most of the singers the dialogue was a hurdle, simultaneously underpowered and elbow-in-the-ribs overemphatic. When, well into the opera’s ninety minutes, Zack Powell—an actor—appeared in the tiny role of the landowner’s second son, his easy projection came as a bit of a shock. And when, a while later, the landowner himself showed up, in the commanding voice and presence of bass Nathan Berg, we got the full measure of what the other singers had lacked. They weren’t, in fact, a bad lot: The three sopranos—Camille Ortiz as the materfamilias, Teresa Castillo and the young Paris-born, Montreal-educated Samantha Louis-Jean as her two marriageable daughters—all had fine voices with strong top notes, if less command down below. That was true, too, of Victor Sicard. in the central role of the disinherited farmer; his light-textured baritone often seemed to vanish in ensembles—it was hard to believe in him as the firstborn son of the effortlessly booming Berg. (A number of YouTube clips make a better case for his gifts.) As always with Lafayette, though, its artistic director, Ryan Brown, came through big-time in the pit, his period orchestra playing with style and a real sense of pleasure in the music they made. A disappointment Silvain may have been, but I’m not going to hold it against them.