For winter-weary Toronto opera lovers in need of a feel-good show, the Royal Conservatory of Music-Glenn Gould School’s Die Fledermaus is just what the doctor ordered. I, for one, never leave after a decent performance of this Viennese bon-bon without a smile on my face. Based on the most recent opera performances statistics worldwide, Johann Strauss’s Die Fledermaus is ranked 11th out of a total of 2,658 works in terms of popularity, ahead of such perennial favourites as Aida (12), Il trovatore (20) and Lucia di Lammermoor (26). Given the effervescent score with its endless flow of sublime melodies, hilarious plot twists, sure-fire theatricality—not to mention the obligatory operetta “blame it on the champagne” happy ending – what’s not to love?

The RCM-GGS production is directed by Joel Ivany of Against-the-Grain Theatre, who’s known for his unconventional take on the standard repertoire. Sure enough, Ivany reframes the story to that of a local opera company presenting the Strauss operetta. Act I takes place at a Sitzprobe rehearsal, as artists arrive in their street clothes, sit down and have their first orchestral run through. Act II is more conventionally staged, in what serves as Prince Orlofsky’s digs. Ivany gives us the most radical departure in Act III—no jail and its paraphernalia, instead it’s the morning after a wild post-performance house party where things got a bit out of hand. 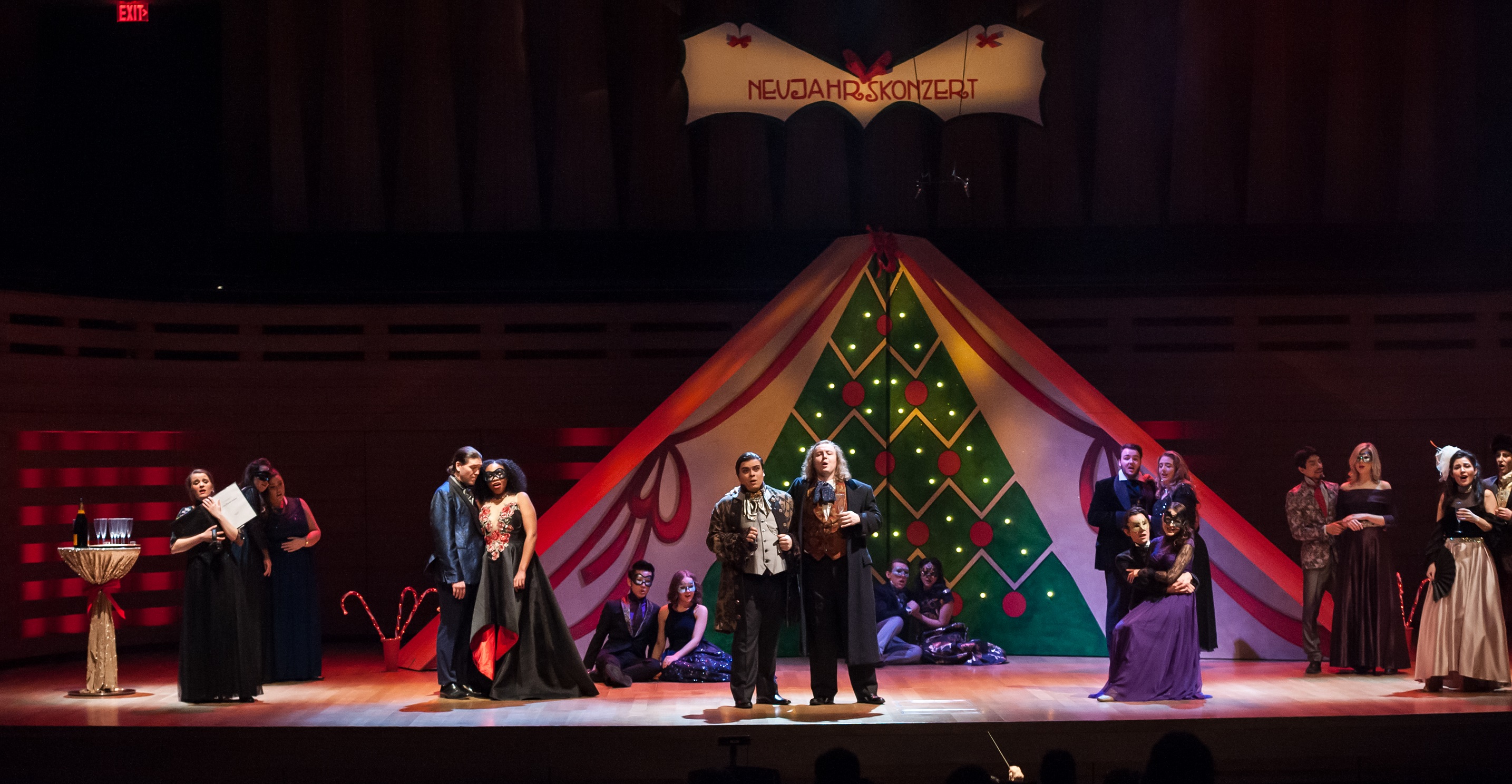 For his reworking of the piece, Ivany has rewritten the original German dialogues, here given in English. Everyone has two identities—the character in the opera, as well as that of the singer. The original plot details that aren’t important or don’t fit into this concept are minimized or eliminated. For example, none of the usual tedious whining by Adele begging for a night off to visit her sick aunt—yay!  But while you gain something, you also lose. There’s little of Alfred bursting into song trying to woo Rosalinde, thus depriving the tenor (in this case the mellifluous-voiced Jacques Arsenault) of the chance to show off.

What we do get is something very different. Giving each character dual identities allows the real lives of the artists to intersect with their roles and relationships in the original opera. A very obvious example right at the beginning—I’m referring to Rosalinde/Rebecca and Eisenstein/Ivan. This couple is going through a rough patch in the opera, and in ‘real life’ the two singers have just broken up, but are now thrown back together to play husband-wife.  This creates a story with layered meanings, making Act I quite intriguing, a sort of ‘life imitating art’—an effective theatrical trick.

To be sure, this cute plot device has been used in Regieoper in the past. The moment I sat down in my seat and saw the stage set up as a rehearsal studio, I was clued into what Ivany was trying to do. Two recent productions come immediately to mind. One is the 2011 Salzburg Festival Die Frau ohne Schatten by Christof Loy, set in a recording studio (!) where the singers are both themselves and their characters. The other was a 2005 Norma by De Nederlandse Opera from Amsterdam. In this Guy Joosten production, the three singers playing the principal characters (Norma, Pollione and Adalgisa) have a sort of love triangle in real life as well.

This theatrical device can be very effective and thought-provoking. Ivany’s ‘life imitates art’ trick works quite well in Act I. All the characters have interesting personalities, with plenty of amusing character studies, running the gamut from prima donnas—of both genders—with all their quirks, to a cynical stage director who doubles as Dr. Falke. Act II with it’s ballroom scene is not a huge departure from the original.

Act III is a different kettle of fish altogether, with radical alterations. There’s no jail. All the usual silliness with the Jailer, Frosch, is gone. The setting has been changed to the aftermath of a wild party. Why they got into trouble with the law is unclear; and why Adele remains the only sober one is even more curious. While I love Die Fledermaus, I’ve always found Act Three a bore, so Ivany’s rewrite has actually made it more interesting. While it’s far removed from the original and his Act III doesn’t make perfect sense, I remind myself that few production concepts like this one can withstand scrutiny under a microscope.  If the intention and the execution of the reworking show respect for the spirit of the original, it’s good enough. 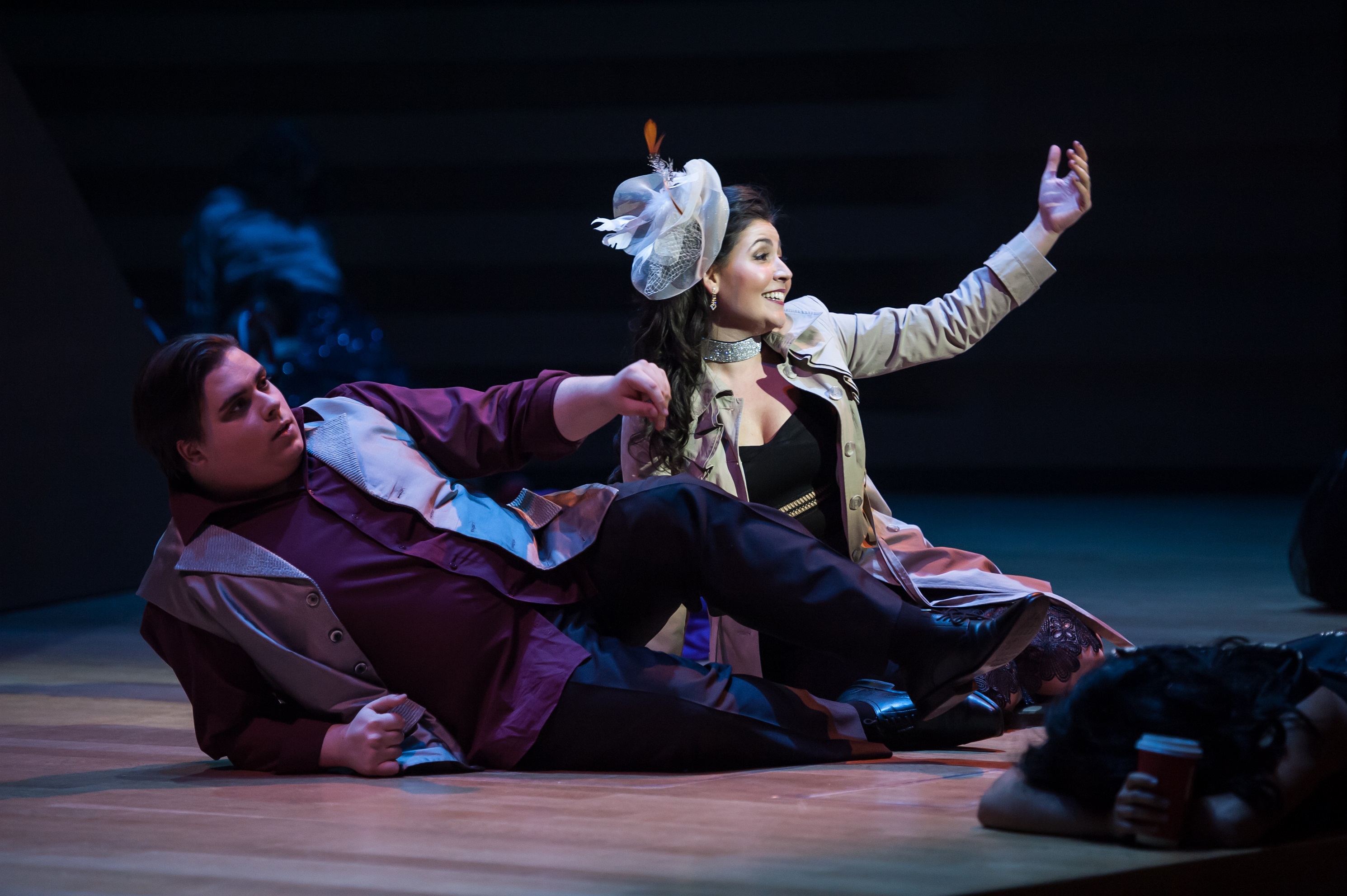 Musically, opening night (Mar. 14) was a success. The voices were young, fresh, generally well cast and technically secure; the acting enthusiastic and full of youthful energy. I particularly enjoyed the flamboyant Rosalinde of soprano Jonelle Sills, who sang a mean Csardas. Lynn Isnar was a saucy Adele, with terrific stratospheric high notes (if somewhat less focused tone in the passaggio) and she acted up a storm. Mezzo Rachel Miller was a very good Orlofsky, perhaps not the most in-your-face Prince I’ve seen but she sang “Chacun a son gout” well without yodeling. Eisenstein is a tricky baritenor role that can be taken by either voice type. Almost a character role with lovely ensemble music to sing but no true aria, baritone Kjel Erickson’s Eisenstein sounded closer to tenor than baritone to my ears.

Tenor Jacques Arsenault was a well sung and engaging Alfred/Carmelo, although in this production his moments to shine vocally were few and far between. Baritone Adam Harris was a really good Falke, with an enjoyable “Bruderlein, Schwesterlein,” not to mention acting to the hilt as a sardonic stage manager Henry. German diction was generally good—kudos to the diction coach.  The set design, typical of GGS productions, is simple but quite effective. Given it’s done in a concert hall with no curtain, nor the possibility of real scene changes, it was a job well done. 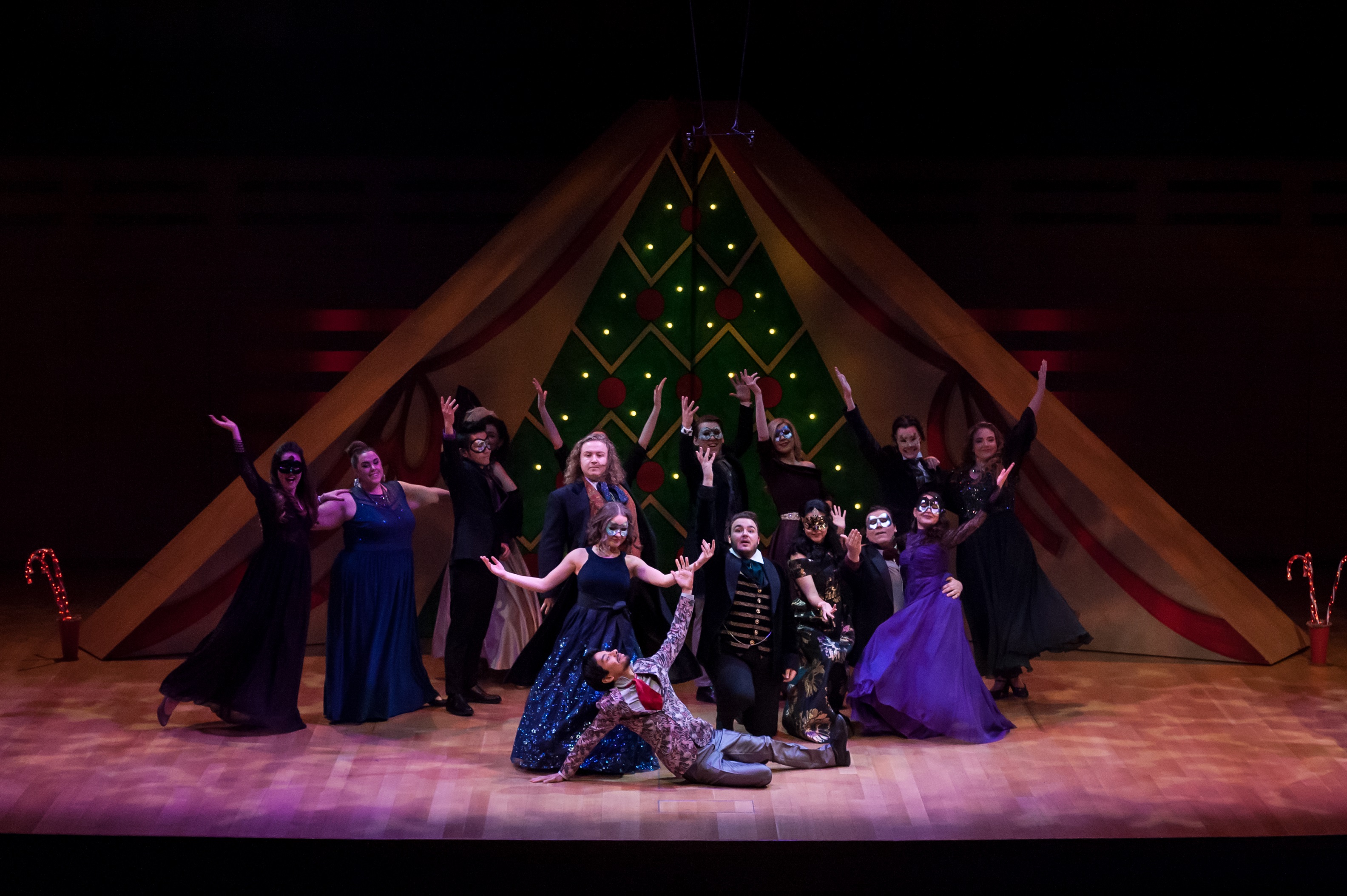 Last but certainly not least, I want to single out the work from the pit, under the direction of young Canadian conductor Nathan Brock, who is now Kapellmeister at the Hamburg State Opera, one of the “A” houses in Germany. Given his important job there, a staple such as Die Fledermaus is I’m sure something he knows like the back of his hand.  It showed last evening, when he conducted with energy and verve, crispness and well-judged tempi, eliciting lovely sounds from the Royal Conservatory Orchestra – bravi tutti!