Did you ever wonder what happens when three tenors share the concert stage? Operettts—the three ‘t’s standing for each tenor—offered a gleefully amusing answer in the form of a rivalry between three divos all on one stage, performing operetta’s greatest hits. This work celebrated its world premiere in English on September 22, with Toronto Operetta Theatre (TOT) at the St. Lawrence Centre for the Arts.

Operettts, which had its 2007 premiere in Vienna—the birthplace of operetta—was created by Thomas Sigwald, one of TOT’s three tenors. Christian Koch, pianist and occasional fourth tenor, helped Sigwald translate Operettts from German into English. The two overlooked no opportunity to tailor the show to Canadians, at one point teasing the nation’s devotion to Céline Dion. On stage, Sigwald and Koch were joined by Canadians Adam Fisher and Michael Barrett to form a cast with seemingly infinite energy and wit. Their enthusiastic singing parodied tenor stereotypes, from competing long-held high notes to literally sabotaging each other’s performances. 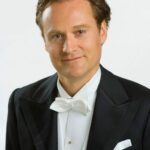 Slow to Start, but a Smashing Finish

The show was full of non-stop slapstick humour, like the slapping match that broke out between the tenors in an homage to the Three Stooges. Although at times this distracted from the musical quality of the performance, other gags—such as tenor cracks—rounded out the parodic comedy, and any flaws were long forgotten after the show’s second half.

A New Twist on Old Classics

The second half began with a vocal transcription of the famous overture to Johann Strauss II’s Die Fledermaus, which audience members couldn’t help but hum as they left the theatre. The overture—which was written for a full orchestra—was almost entirely sung, filled with nonsense syllables and the accompaniment of the audience’s giggles. This was followed by the finale, “Operettts in ten minutes.” In limited time, the four sang, danced, and acted out excerpts from twenty-six operettas, making a pastiche of everything audiences love about the genre, from cheesy love duets to absurd and nonsensical plots. To end the show, a sing-along finale allowed the operetta lovers and families in attendance to join in the fun. During the standing ovation the audience demanded an encore, which was swiftly obliged with “You are my heart’s delight” from Franz Lehár’s The Land of Smiles.