Patience can be amply rewarded: Teatro Nuovo’s Maometto Secondo, thrice deferred, at last hit the New York stage (Jazz at Lincoln Center’s Rose Theater, on November 2) and proved the best thing Will Crutchfield’s period-practicing aggregation has done in the four and a half years since its founding. First announced for a 2020 season that marked its bicentenary, Rossini’s 1820 Neapolitan drama fell victim to COVID, was postponed again in 2021, and then, this past summer, got bumped a third time, a mere week shy of its premiere, with COVID once more the culprit. But from first note to last of a nearly four-hour evening, the opera and its performance were easily worth the wait. Arrayed across the breadth of the Rose’s stage and extending into the side boxes, the musicians of the Teatro Nuovo Orchestra, led by Jakob Lehmann (the company’s Associate Artistic Director) on violin and Lucy Tucker Yates at the harpsichord, reveled in their instruments’ ear-catching sonorities; and when the score’s banda marched onto the stage in act 1 (and again in act 2), the audience couldn’t contain its delight.

I could sense, too, throughout the opera, the twenty-eight-year-old Rossini’s delight in not just the sounds he was making but the musical and dramatic shapes he was crafting. Maometto is a sprawling score, but it never seems longer than it has to be; one number and scene leads to the next without an overt sense of stop-and-start—a trait that Lehmann and Yates made propulsively apparent. There aren’t more than two recognizable “hits” in the opera (Anna’s act 1 preghiera with chorus, “Giusto ciel, in tal periglio,” and Calbo’s act 2 scena, familiarized by Marilyn Horne and Shirley Verrett in L’assedio di Corinto, the cut-and-paste hodgepodge of Maometto and its extensive French revision as Le Siège de Corinthe). But there’s prime Rossini in profusion in this tale of a virtuous fifteenth-century Christian girl who falls for the wrong guy—he’s the Ottoman sultan Mehmed II (Maometto Secondo) in disguise, bent on conquering the Venetian colony of Negroponte, which her father governs. 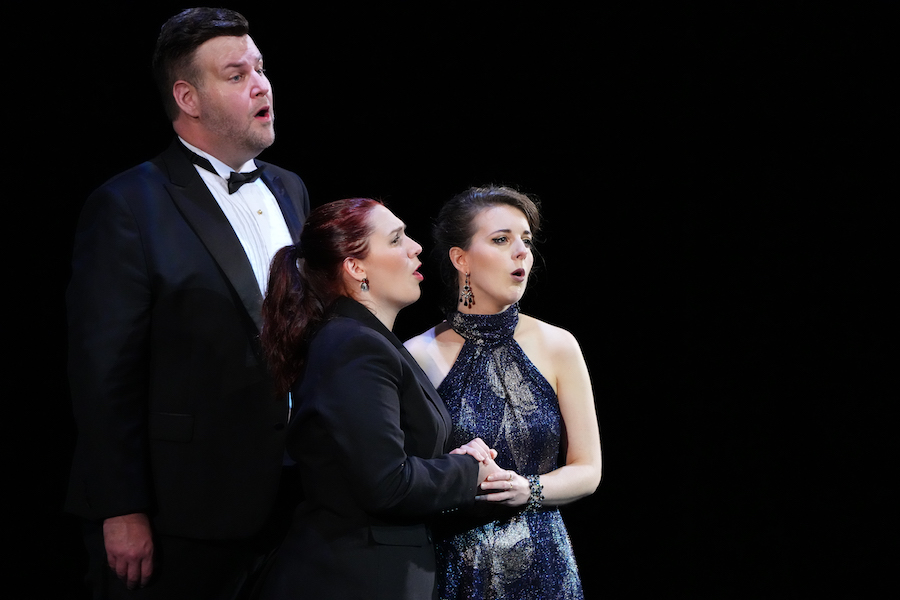 In Teatro Nuovo’s cast, uniformly stylish and committed (the recitatives were delivered with exceptional clarity and force), the women outclassed the men. As the governor, Paolo Erisso, Nicholas Simpson’s bright-timbred tenor lost impact as it descended; it’s a role written for Andrea Nozzari, creator of Rossini’s Otello, and it needs a Michael Spyres sort of baritenor to do it full justice. Scott Purcell, who took over the title role after the summer postponement (replacing Hans Tashjian, whose Mehmed-evoking face had figured prominently in much of the earlier PR), deserves credit for pluck, but his woolly baritone, similarly weak down below, lacked substance and sheen. (He shook, by the way, a mean “jingling Johnny” in tandem with the banda in act 2.) Neither he nor Crutchfield favorite Hannah Ludwig, as the Venetian general Calbo, bore the air of a great warrior—she tended to disappear into the stage’s sidelines, just as her darkish mezzo skirted easy audibility in the act 1 ensembles—she sang her big scena with aplomb, with a liberally displayed chest voice and more taste than she had shown as a wildly over-embellished Rosina in 2021’s outdoor Barber of Seville. But the vocal star of the show, for me, was Vancouver native Simone McIntosh, lithe and lovely, whose crystalline high mezzo fully commanded Anna’s wide range and whose unforced expressivity shaped every phrase with eloquence; her final aria was exquisitely nuanced without seeming the least bit precious. This Maometto was as close to an actual staging as a semi-staging can get, with the solo singers all fully score-free (the fine chorus, trained by Crutchfield, carried theirs) and interacting with freedom and relish in front of a series of projected architectural “sets”; the program credited Brandon Shaw McKnight as “production stage manager.” It was, all in all, an evening very well wrought, very well spent.