After a long absence of over two years, the Toronto Summer Music Festival (TSMF) returned last evening to Koerner Hall, its mainstage venue, playing a scintillating concert to an enthusiastic audience. The theme of this year’s Festival is Inspirations, an exploration of how musical creativity reflects—and inspired by—the life and the society of the creator.

It was good to see the familiar face of TSMF Artistic Director, violinist Jonathan Crow, once again onstage offering his words of welcome to the audience. Special guests included the Lieutenant Governor of Ontario, Elizabeth Dowdeswell, as well as a bunch of healthcare workers from the Toronto Sick Kids Hospital. And it was great to hear the familiar voice of well-known broadcaster Tom Allen as MC, looking summery in his all-white outfit, offering his usual pearls of wisdom on the music we were about to hear.

Incidentally, Allen made references to the detailed program notes, alas only in electronic format. How do you use your smartphone scanner to access, in the middle of a concert without the bright light disturbing your neighbour? A sign of the times! I was able to read it later, and the notes are indeed excellent, giving us very interesting historical background of the compositions.

Kicking off the proceedings was Schumann’s Five Pieces in Folk Style, Op. 102, with cellist Matthew Zalkind and pianist Rachael Kerr. Schumann is at his most melodically inspired here. Zalkind’s extraordinarily warm and mellow sound, together with the incisive playing of Kerr made the work an unalloyed pleasure to the ear. His playing of Langsam, the second movement, was particularly lovely.  He also did full justice to the exquisite third movement, which Schumann specifically labeled “nicht schnell, mit viel Ton zu spielen.”—talk about being particular! 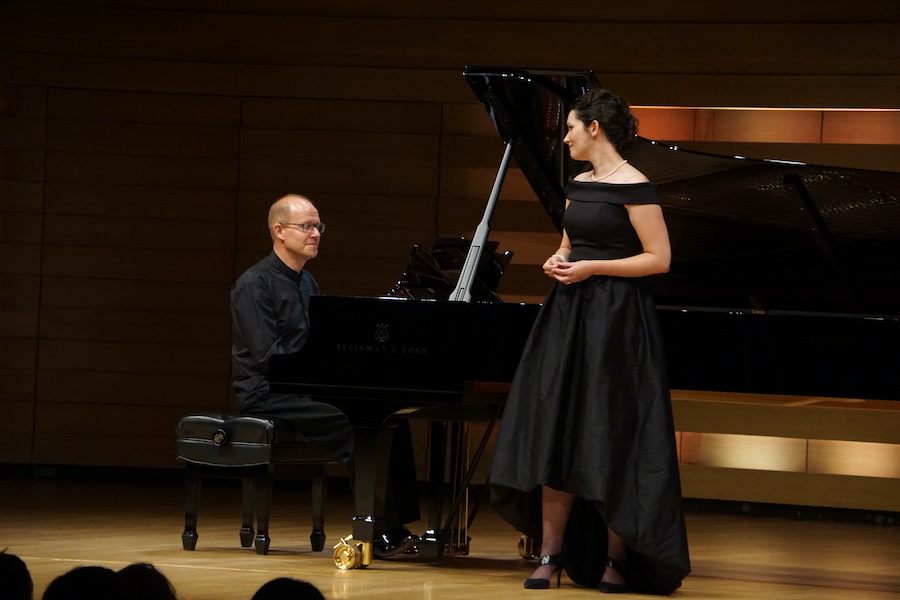 Next came soprano Mireille Asselin, in a cycle of four songs by Cecilia Livingston based on songs by Canadian folk composer Wade Hemsworth, with Steven Philcox at the piano. The opening passage of “Foolish You,” sung a capella, showed off the lovely gleam and purity of tone in Asselin’s lyric soprano. The songs themselves are lovely if not particularly folksy to my ears. Philcox tackled the score with his usual technical prowess and humour in “Wild Goose.”  Also related to my earlier comments about the necessity for printed program notes, Asselin has excellent diction, but I really missed the printed text given the unfamiliarity of the piece. Ditto for the two songs by Ukrainian composer Mykola Lysenko, sung in Ukrainian. 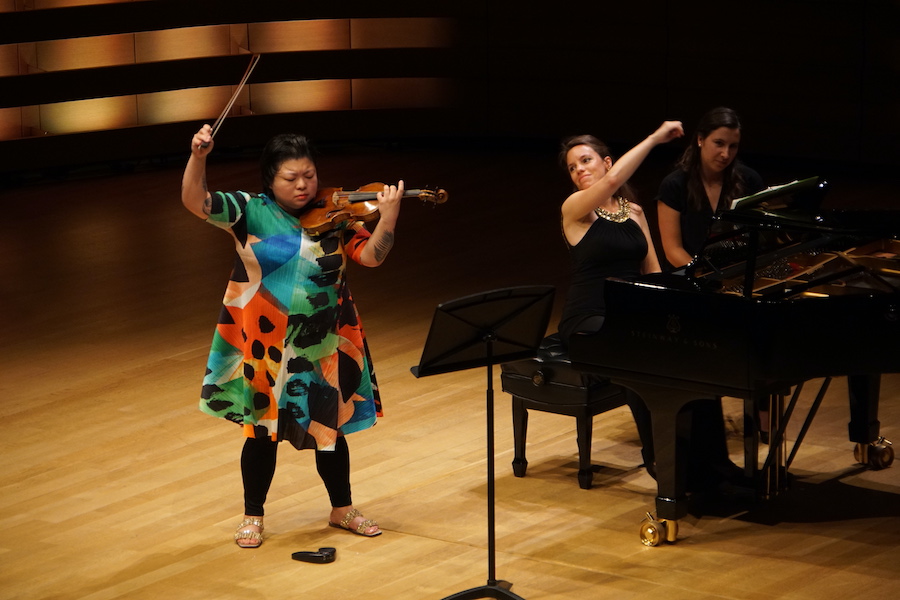 Kudos to violinist Yura Lee and pianist Rachael Kerr for their supremely entertaining rendition of Ravel’s Tzigane, a Frenchman’s take on the Hungarian Gypsy music. Ms. Lee played it with all the requisite flair and technical prowess this piece demands—look at the photo of them in action and you’ll get a good idea!  The playing of the extended, unaccompanied opening, red hot in character, immediately followed by a cool cascade of piano notes, certainly made me sit up and take notice. To my eyes and ears, this was arguably the highlight of the many highlights in the first half.

The second half was devoted to a single work, Dvořák’s Piano Quintet No. 2 in A Major, Op.81, an iconic piece that draws its inspiration from the wealth of the Czech folk tradition, one that’s chock-full of melodies, once heard never forgotten. Particularly enjoyable was the second movement, “Dumka” with its melting lyricism and heart-touching melancholia. It contrasts well with the “Scherzo” to come, all light and airy, with many changes of tempi and mood. All executed with great technical prowess and incisiveness by the five members of the ensemble. If I had to single one player out for praise, it would have to be violist Juan-Miguel Hernandez, who truly made his instrument sing.

There you have it, a marvelous opening to the 2022 TSMF. If you are like I am, a classical music omnivore, starved for in-person events over the past two years, here’s your chance to make up for lost time. I say, bring it on!