ALBUM: Robert le Diable Palazetto Bru Zane “a milestone in the history of opera that should be heard by anyone with an interest in the development of the genre”

The latest release in the CD/book series from the Palazetto Bru Zane is Meyerbeer’s 1831 grand opera Robert le Diable. It’s an important opera embodying the components that would come to be thought of as French grand opera; many of them for the first time and it’s not surprising that it was dubbed “The First Romantic Opera”. It was too, in its day, wildly successful. Following its premiere at the Opéra de Paris it was produced in 69 theatres across Europe in the next two years. It remained a staple of the Paris repertoire with 754 performances up to 1893 when it disappeared from sight for over 100 years. It’s a pivotal work marking a key transition from the tradition of Lully, Rameau and Gluck to something rather grander.

Let’s examine some of its, for 1831, innovative features. It’s extremely demanding on the singers especially the tenor singing the title role. It requires a singer with genuine high notes, sung without using falsetto, and the heft to sing over a large orchestra. Comparable roles would be Arnold in Guillaume Tell and Énée in Les Troyens. Robert also marked the first use of gas lighting at the Paris Opera and was one of the first works to have costumes and scenery created for it rather than repurposed from earlier productions. It also, and in true Parisian style, makes extensive use of ballet. In many ways it embodies the idea of the Gesamtkunstwerk a decade or two before Wagner and marks the transition from the tragédie lyrique tradition of Lully, Rameau and Gluck to something more modern.

The plot is very 19th century. It’s set in 13th century Sicily where Robert, Duke of Normandy, has gone to compete in a tournament and win the hand of the local princess Isabelle. Unbeknown to him his travelling companion, Bertrand, is both his father and the Devil. His late saintly but barren mother having done a deal with said Devil to get a son. The opera turns on the struggle for Robert’s soul along with love interest in the form of Isabelle and a Norman peasant couple Alice and Raimbaut. The basic plot allows for fashionably gothic elements such as hellish grottos and the famous ballet of dead, damned nuns.

Musically it’s very grand and full of memorable melodies. The orchestra is large and the recitatives all have orchestral accompaniment. It’s also very long. Even with cuts (indicated in the accompanying libretto) the Bru Zane recording comes in at 210 minutes or so. There are some very good arias and ensemble numbers including the only one that ever seems to be performed today; Isabelle’s “Robert, toi que j’aime”. Despite the general grandness of the music Meyerbeer treats his singers with some sensitivity and generally the text is clearly audible even in ensemble numbers.

The performances are uniformly excellent. John Osborn sings Robert and is one of a handful of tenors today who can take on such a role. He combines power and ringing high notes with real lyricism and sensitivity to the text. He’s well partnered by Nicolas Courjal as Bertram. He’s a genuine bass with sepulchral low notes but also real beauty of tone. The ladies make a nicely contrasting pair too. Erin Morley, as Isabelle, has a lot of really intricate and ornamented music with serious high notes. She manages all this with aplomb. Alice’s music is less elaborate, perhaps more lyrical, and suits the clean, rather beautiful sound of Amina Edris extremely well. The minor roles are all fine. The Orchestra National Bordeaux Aquitaine and the Choeur de l’Opéra National de Bordeaux are both quite at home in this music. It’s conducted with considerable sensitivity and style by Marc Minkowski.

The studio recording is excellent and, this being one of the Bru Zane series, the bilingual documentation is fulsome running to 148 pages including the full libretto in English and French. There’s also far more material about the opera and its context than I could include here.

Robert le Diable has much to recommend it as an opera and it’s hard to imagine it getting a better treatment on disc. It’s also a milestone in the history of opera that should be heard by anyone with an interest in the development of the genre. 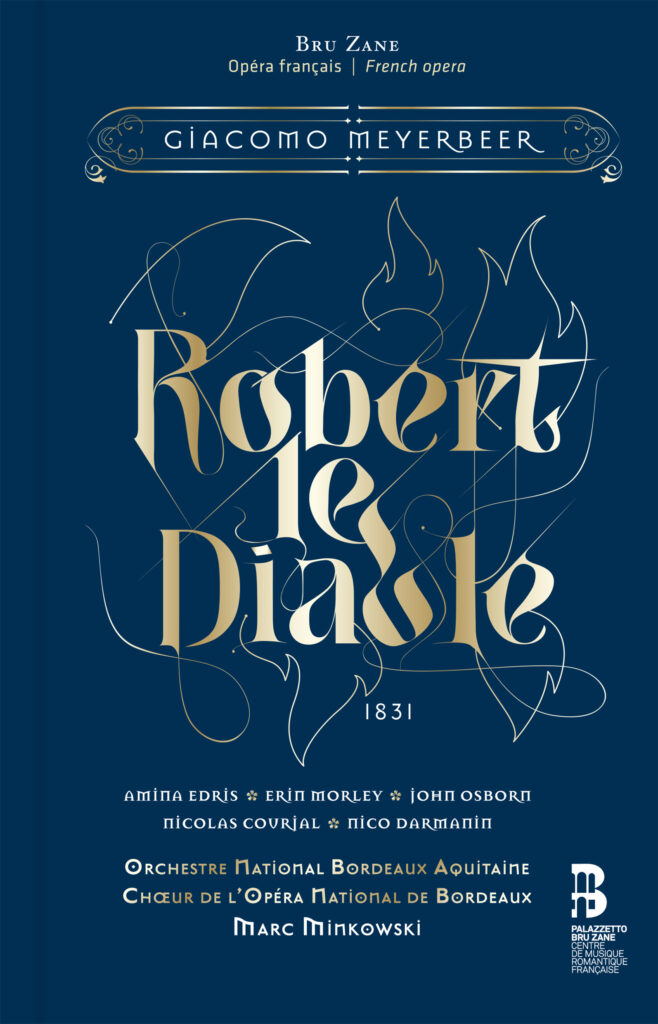