Less than two weeks later on Mar. 11th, the first casualties of the epidemic forced Metropolitan Opera to cancel everything. Within days, the Québec government ordered the closure of all performance venues among other quarantine measures. This included OdQ’s Mar. 17th planned unveiling of their 10th annual Festival d’Opéra—Legendre’s last before his retirement in Dec. 2020.

On Apr. 2nd, OdQ announced the cancellation of its May performances of Johann Strauss’ Die Fledermaus which as Legendre notes, was “a very beautiful production.” And then it was the Festival’s turn. Its mainstage feature would have been Cosi fan tutte, as well as a Lucia di Lammermoor produced by Jeunesses Musicales du Canada, and two operas for young audiences. On July 3rd, the uncertainty of the situation forced the OdQ to cancel its fall production of Don Pasquale, with hopes to return for a spring 2021 production. For the OdQ team—three in the office and a further 4 working remotely—the process of undoing their work had begun.

The Québec government invited the arts to “reinvent themselves.” Yet for Legendre, “reinvention had begun 15 years previous” when OdQ revisited traditional repertoire with inventive stagings, not to mention the Festival de l’Opéra de Québec. Its daring programming has notably featured the North American premieres of co-productions with major companies like the Met.

The “reinvention” of live performance would also manifest itself on digital platforms. Legendre underlines how “In the case of OdQ, it’s difficult to make these means profitable.” He adds, “nothing is comparable to the experience of being there in person, to live in the emotion of the moment, with the artists and with the public.”

From the start of his tenure with OdQ in 1994, Legendre has left his mark. Despite the current crisis, he is leaving after 26 years with the feeling of having “surpassed what he had set out to do.” With works by Wagner, collaborations with the Metropolitan Opera, Robert Lepage and François Girard, as well as an opera version of the musical Starmania, Legendre dared to present contemporary works to a rather conservative public and “showed as many people as possible the extent of what can be done with opera.”

A major source of pride is Legendre’s longstanding commitment to providing opportunities to many young Québecois singers while also offering more established singers a platform to tackle new roles. The many accolades the outgoing Artistic Director has received (the Order of Canada, Grand Prix Diplomé de la Faculté des Sciences de l’Administration de l’Université de Laval, and an Opera Canada Ruby Award) reaffirm his high standing in the Canadian opera industry. Despite the current situation, he is leaving OdQ’s finances in order. In retirement, he anticipates the opportunity to relax and to take up the cello again, an instrument he studied at the Conservatory before dedicating himself to singing.

For internationally-lauded Canadian baritone Jean-François Lapointe, who officially takes over for Legendre in September, the prospect of becoming the new director of an opera company is already a challenge, but beginning at a time of uncertain conditions is an absolute adventure. Although he had already worked out two years of programming, he must now rework it, rescheduling Don Pasquale in two years. Public Health Québec currently authorizes only 250 people in a concert hall. Lapointe must now “adapt [and] react”; he must organize, for example, an opera gala—virtual or in person—according to the current restrictions and do everything he can to ensure OdQ’s sustainability.

Lapointe expects to continue the Festival d’Opéra: “the showcase of OdQ and the pride of the city of Québec,” to develop more collaborations with Europe and to put the spotlight on francophone repertoire which he knows well, having sung it around the world. Like his predecessor, he wishes to provide opportunities to young artists and especially to “permit young artists from here to work here.”

Realistically, he knows that the resumption of activities will be difficult and that, “it will be a while before we will recover from all of this.” But he will not be overcome by these obstacles and remains positive and confident in OdQ’s future. 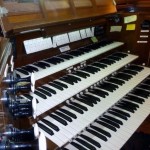