Highlands Opera Studio’s return to a full season with masterclasses, concerts, community events, and operas, culminated with a fully staged version of Tchaikovsky’s Eugene Onegin. In order to showcase the artists in Valerie Kuinka’s and Richard Margison’s unique summer program, Onegin was double cast, with each group bringing its own flavour to Tchaikovsky’s masterpiece.

Kuinka’s creative direction used all the space in the Northern Lights Pavilion—aisles included—to intimately involve the audience in the characters’ journeys. During Prince Gremin’s aria, her use of tableaus was particularly effective, and indicative of Kuinka’s sensibilities as a musician since her stage blocking is guided by the nuances of the opera score. David Sweeney’s projections and simple lighting in the first scenes captured the mood of the bucolic countryside so dear to Tchaikovsky. Conductor Juliane Gallant skillfully provided the balance and sensitivity needed to interpret the emotive score, while her piano accompanists—Stéphane Mayer and Vladamir Soloviev—hauntingly captured the raw emotion of Tchikovsky’s music. 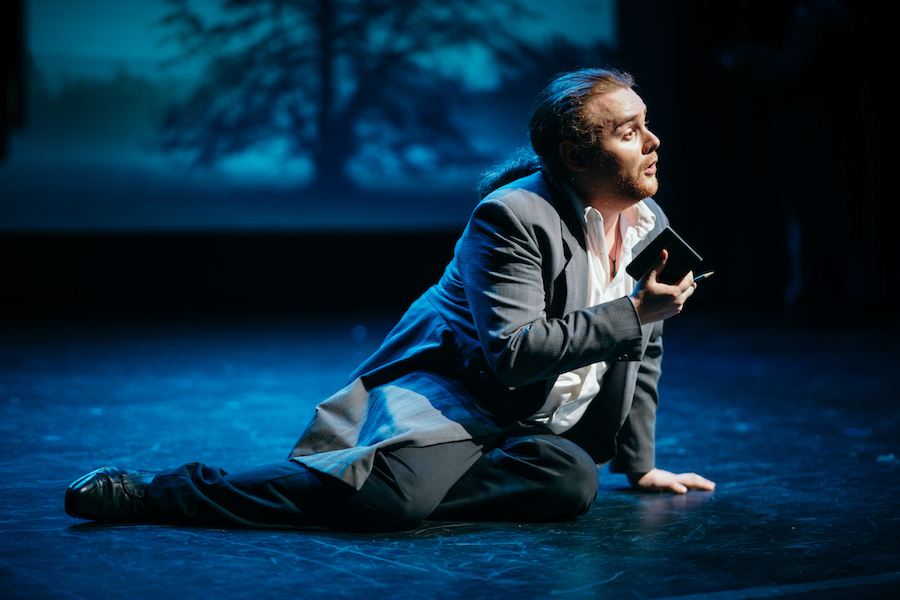 In the first cast, Geoffrey Schellenberg was a dark, brooding Onegin, whose strong vocal performance carried the audience through the life of a man apparently bent on self destruction. Lauren Margison was well suited to the role of Tatyana; her facial expressions deftly showing her character’s angst. Her letter scene was radiantly sung with rich vocal dynamics. River Guard’s Lensky morphed from a teenager in love to an anguished jilted lover whose second act aria was affecting and completely convincing. Simona Genga was a flirtatious, effervescent Olga, her lush voice leaving the audience wanting to hear more. The second cast was led by Micah Schroeder as Onegin. Schroeder embodied a 19th century dandy, showing his character’s aloofness from the very moment he stepped on stage and viewed the other characters with disdain. His vocal power came to fruition in the final scene as he humbled himself before Tatyana. Jonelle Sill’s Tatyana was filled with beautiful vocal turns, and her understated and natural acting made the audience constantly aware of the simmering emotions of her character. Hillary Tufford was an engaging Olga, perfectly embodying the flirtatious innocence of the character, while also showcasing a rich, velvety tone; hers will be a voice to listen for in the future. Efraìn Corralejo’s pure tenor voice was perfect for the role of Lensky, and his final aria showcased a glorious command of his top register. During all performances, Amanda Weatherall was a sympathetic and mellow toned Filippyevna, Daevyd Pepper was a vocally flamboyant and hilarious Triquet, Olivier Zerouali was a strong voiced Zaretsky with excellent stage presence, and Matthew McLellan was a noble and lushly sung Prince Gremin. Queen Hezumuryango and Hélène Picard alternated as well sung and sympathetic Larinas. Local actor David Barker was a silent Guillot in the duel scene, his reactions to the violence bringing a human dimension to this tense Act.

During the chorus scenes, the audience was treated to the full power of the human voice by the Studio ensemble. Although the entire cast looked convincing in the costumes, there was a sense of historical ambiguity due to the varying styles. After the opera, the audience was left with the underlying question Tchaikovsky poses in Eugene Onegin, “what if…?” But they were also left with another question: what lies ahead for the talented singers of Highlands Opera Studio? If this production is indicative of the future of young Canadian singers, we are in for an exciting era of new talent.