One of Highlands Opera Studio’s mandates is the creation, development, and presentation of new Canadian operatic works, including telling stories of people who have been historically silenced and marginalised. This summer, Highlands Opera teamed up with Toronto’s Loose Tea Music Theatre to present two projects from Loose Tea’s  BIPOC Composer Librettist Program.  Canadian Stories Told Through Opera featured two works. 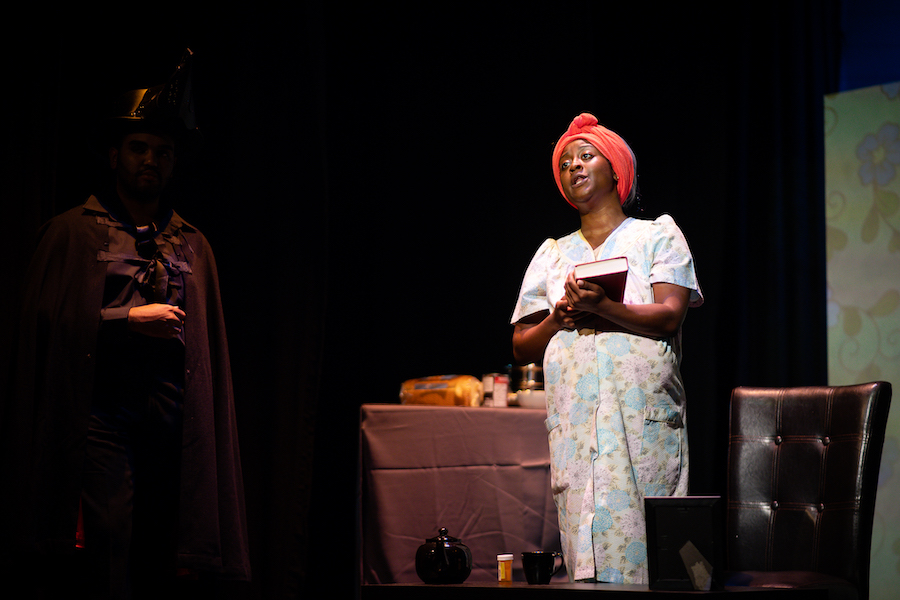 The first, Inertia, is a story about elderly neighbours, Evelyn (Queen Hezumuryango) and Addison (Matthew McLellan), who live next door to each other but are isolated and lonely. Then Death comes calling. Both librettist Christene Browne’s and composer Ashley Au’s experiences in working with an ageing population were reflected in the emotional depth of their work. Mezzo-soprano Hezumuryango portrayed the religiously fervent Evelyn, using her vibrant stage presence and her impressive vocal dynamics to take us on the emotional roller-coaster of a woman facing her encroaching mortality. McLellan’s rich bass voice and his ability to portray an elderly man without turning him into a caricature, brought sensitivity and pity to the character of Addison. Baritone Olivier Zerouali, in the role of Death, was a delight to watch. Zerouali’s use of richly smooth and quiet legatos, powerful tortured vocal punctuation, and quietly spoken statements like “see you soon”, left the audience squirming in their seats. 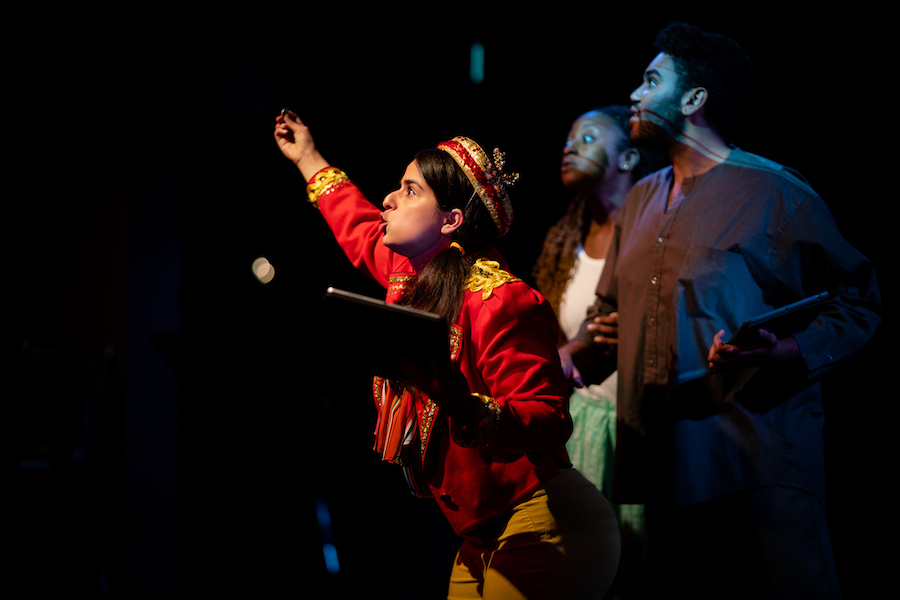 The dancers (Sophie Longo and Ella Moynes) who accompanied Death added another eerie dimension to the tale. Kudos to pianist Janelle Fung for her leadership in the five piece orchestra. Alaina Viau’s visually striking and effectively timed projections made the simple sets come alive. Lighting and set designer, Logan Cracknell’s creativity was very impressive in the second work, The Museum of the Lost and Found.  Projected symbols of a shoe, feathers, and a plaid jacket, interspersed with frenetically paced visuals, vividly expressed the fractured world of Indigenous women, girls, and two-spirit people. Composer and librettist Olivia Shortt’s complex and diverse score and libretto were sung by Highlands Opera artists Tamar Simon, Queen Hezumuryango, and Olivier Zerouali. As the museum guide, Simon used her skilled comedic timing and strong soprano voice to lead the audience through a world that starts out lyrically and quickly turns into discombobulated atonal music representative of a fractured world.

The string quartet was particularly effective in that they not only played but also spoke throughout The Museum, adding haunting echoes to the intriguing score. Cellist Brenton Chan’s dexterous musicality and vocal versatility were highlighted in his instrumental solo. Music Director Joshua Anand Slater led the singers and musicians through both operas’ challenging scores with energy, expertise, and sensitivity. Opera is meant to communicate in music what we can’t always express in words. After the two performances, I spoke with a woman who had recently lost her elderly partner; Inertia profoundly affected her and left her distressed yet affirmed. This is the power of opera and the strength of combining the artistic team of Loose Tea Music Theatre and the talented singers of Highlands Opera Studio.

CREATORS
Inertia by Ashley Au, composer and Christene Brown, librettist
The Museum of the Lost and Found: gaakaazootaadiwag by Olivia Shortt, composer

CAST
Tamar Simon, soprano | The Guide (The Museum of the Lost and Found: gaakaazootaadiwag)

Queen Hezumuryango, mezzo-soprano | Evelyn (Inertia), The Attendee (The Museum of the Lost and Found: gaakaazootaadiwag)

Alaina Viau, director (The Museum of the Lost and Found: gaakaazootaadiwag)

*The participation of these artists is arranged by permission of Canadian Actors’ Equity Association under the provisions of the Dance Opera Theatre Policy (DOT).