Edmonton’s Nuova Opera and Music Theatre Festival is back in full force, offering early-career singers and developing repetiteurs professional mentoring, and more importantly, in the singers’ case, opportunities to perform for live audiences. This summer Kim Mattice Wanat’s company offers two operas—Menotti’s The Consul, directed by Brian Deedrick, and Monteverdi’s The Coronation of Poppea, directed by Mattice Wanat, who made her Edmonton Opera directorial debut in March with a production of Così fan tutte.

The four performances of The Consul took place in late June and early July at the Freemason Hall downtown, essentially a school gym-type space with a small stage at one end, where twenty members of the Edmonton Symphony, led by the Regina’ Symphony’s music director Gordon Gerrard, played (the quality of the orchestral performance was exceptional, if at times a little zealous, given the cold acoustics of the space).

The set was a squeaky hardwood floor, every inch of which was covered with official-looking papers, a nod to the storyline’s indictment of opaque, heartless bureaucracy. Other props were brought in and efficiently removed as the three grimmer and grimmer acts unfolded. Deedrick is deft at shaping the scenes theatrically and fluidly, making it easy to ignore the rudimentary venue he was working with.

The broken heart of the piece is Magda, wife of political dissident John Sorel, who’s on the run from the fascist authorities, and is hoping he can rejoin his wife and their infant child, across the border in a safer country. It’s Magda’s need of a visa to exit that drives her Kafkaesque battle with the faceless state, a losing battle that ends with her slumped over a wooden swivel chair, dead from an overdose (she puts her head in an oven in the original).

The Magda I saw, Chelsea Kutyn, was magnificent. She epitomized the notion of passionate commitment to a role to horrifying effect, along the way singing her couple of arias with riveting engagement, capturing the full range of Magda’s anger, exasperation and ultimate despair chillingly. She has the power to fill a 2,000 soft-seat auditorium, and in this venue, her depth of characterization and technical command owned the room. 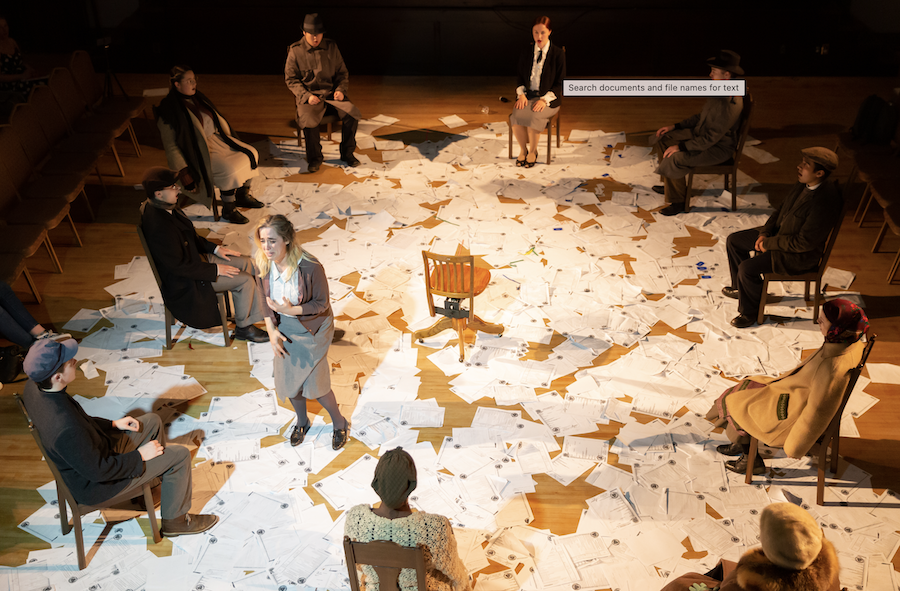 Confrontations with the Consul’s gatekeeper, the Secretary, Cassidy Stahr, were full-blown operatic screaming matches at times, and the two women gave as good as they got. Stahr’s effort at technocratic efficiency, at the expense of her desperate clients, also looking for a way out of the oppressive state, was as effectively impersonal as it was personally discombobulating for the character. Her encounter with a magician (Cameron Mazzei), persistently trying to charm her into giving him travel documents with his tricks, lent some welcome comic relief in this study in totalitarian evisceration of the human spirit.

Kcenia Koutorjevski as the mother brought a touch of ordinary tenderness to the Sorels’ hopeless domestic scene, and her time with her ailing, and ultimately deceased, grandchild, beside the cradle, offered a little lyrical respite to the otherwise edgy, demoralizing life of this family. (She, herself, eventually dies of some disorder off stage late in the opera).

Mazzei’s magician in one scene hypnotizes everyone in the waiting room, except the secretary, into acting as though they are at a ball. The release of the tension every thwarted client has been feeling was palpable, and Mazzei’s portrayal of the ringmaster also leavened the horror temporarily. His singing had a bit of perhaps nervous quaver in it, but it was fundamentally solid, otherwise. 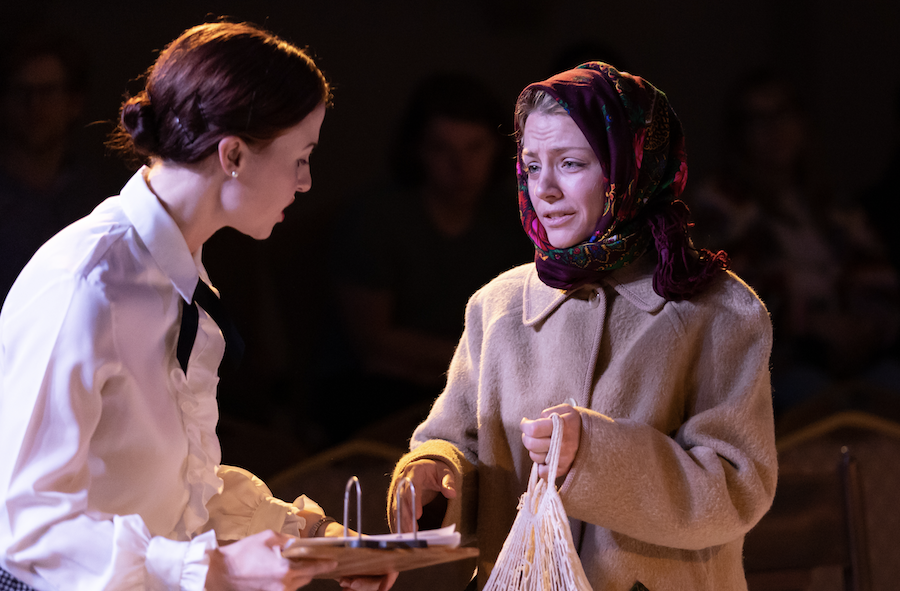 One character in the opera is a “foreign woman,” a refugee seeking documents but unable to communicate in the language required. The nationality of the “foreign woman” isn’t specified in the original, but in this production, Anastasia Pogorelova portrayed her as Ukrainian, wearing a floral headscarf. Pogorelova conveyed the helpless woman’s deference and impotence convincingly.

Opera Nuova has brought many operas to Edmonton that the city wouldn’t see otherwise, and this production of a Menotti less familiar than the popular Amahl and the Night Visitors, was most welcome, and presented with a professional flair that all the aspiring performers in the cast should be very proud of.