The recent passing of philanthropist Roger D. Moore sent shock waves through the Toronto opera scene. A beloved figure within the Canadian classical world, Moore was the recipient of a 2010 Opera Canada—‘The Rubies’ award, an honour which, as former Opera Canada Editor Wayne Gooding says, was to recognize “both the scope and the depth of his tangible commitment to the development of Canada’s opera community.”

Moore was generous with financial support as well as time, energies, and boundless enthusiasm. As mezzo-soprano Krisztina Szabó notes, “he supported and nurtured a whole generation of artists and cultural institutions in Toronto.”

American by birth, Moore worked at Stanford University on computer programming before co-founding I.P. Sharp Associates Limited (or IPSA for short) in 1964, writing software programs and data systems which helped pave the way for email as well as the functionality of the modern internet. Reuters acquired IPSA in 1987, two years before Moore’s retirement. “He came late to opera,” says Gooding, “although he did listen to the Saturday afternoon Met broadcasts, and I think his mother had some training as a singer, so there was that kind of influence, but he didn’t get involved in opera or pursue it as an interest until he moved to Toronto, and that was relatively late in life.” 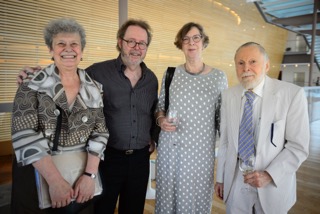 Moore’s passion for music found expression in his consistent and enthusiastic support of numerous Toronto cultural organizations, including the now-defunct Queen of Puddings and Toronto Masque Theatre, as well as The Music Gallery, Tapestry Opera, and the Canadian Opera Company (COC). In 2002 Moore was bestowed with the Roy Thomson Hall Award of Recognition, an award recognizing the contributions of an individual, ensemble, or organization to Toronto’s musical life, and in 2009, a University of Toronto Arbor Award, recognizing his volunteer work.

“I think what fascinated him, being from a mathematical background, was the way music was constructed,” notes COC General Director Alexander Neef. “His observations were very astute, even when he was seeing a piece for first time—whether analyzing it, or watching a performance, or listening to a concert, he always had interesting things to say.”

Moore’s website is a showcase for his passions, and features an extensive series of catalogues with detailed data on more than five decades of COC performance history. Gooding, credited on the page for his “patience and knowledge,” says Moore was “fastidious” in putting the database together, recalling the intense care taken in researching details like altered spellings for character names. That doesn’t mean, however, that Moore was attached to the past. “He was in no way a conservative,” Gooding notes. “He marched to the beat of his own drum and believed in the importance of new works, and in the creation of new operas. He knew (the art form) had to progress.”

Michael Mori, General Director of Tapestry Opera, fully credits Moore with continuous support of the company and its endeavors, which are based around the commissioning, creation, and production of new works. The company’s cornerstone Composer-Librettist Laboratory program was funded by Moore “for most of its existence,” as Mori notes. Such consistent support led directly to numerous new pieces, including The Overcoat, Oksana G, M’dea Undone, Rocking Horse Winner, and many more, yet to be seen. “Roger Moore was one of a kind,” he says. Krisztina Szabó agrees. “He was remarkably generous with financial contributions to many, many arts organizations,” she notes, “but he was also incredibly generous with his time and enthusiasm, particularly for projects involving new works.” Szabó met Moore as a young artist at the COC roughly two decades ago, and since then, he attended “pretty much every performance of anything I’ve ever done in Toronto since. And that is not an exaggeration…he went to everything! He always took the time to talk afterwards, to dissect the performance, the production, the composition.”

The Roger D. Moore Distinguished Visitor in Composition section of the University of Toronto, Faculty of Music’s New Music Festival is one of the many symbols of the philanthropist’s commitment to the creation of new work. A range of international luminaries come to Toronto under the visitorship—celebrated composers such as Krzystof Penderecki, Gabriel Prokofiev, Steve Reich, and this year, Toshio Hosokawa.

Moore also threw his support behind various COC endeavours. In 1999, The Golden Ass was brought to the stage, with music by Randolph Peters, and based on a libretto by novelist and playwright Robertson Davies; as the program notes, the work “was commissioned and developed with the generous assistance” of Roger Moore, among others. He also supported the restaging of Harry Somers’ 1967 Louis Riel, directed by Peter Hinton, in 2017.

“He was intellectually curious, and not afraid of showing it,” says Neef. “His curiosity, his hunger for more music included the hunger not only for things he didn’t know, but the hunger for genuinely new things.”

Moore was also, as Neef, Mori, and Gooding all note, something of an eccentric. He had a beloved cat named Papagena, was a dedicated tomato grower, and adored making bread from flour he would mill at home; he was also known for consistently attending events on his bicycle and would wear a natty tie from his vast collection. “He never wanted praise or acclaim, but quietly attended shows,” Mori notes, recalling an experience where he once attended a winter concert “in full bike gear, a little abashed…and then a minute later Roger showed up in his bike gear as well! I recall thinking how cool he was, and how happy I’d be, if one day I too would be a learned and slightly eccentric older man cycling to shows in the winter, as Roger did.”

At the recent news of Moore’s passing, online tributes were plentiful and came from a range of figures (composers, singers, designers, technology experts), as well as organizations large and small which had benefited from his generosity. Bass Alain Coulombe posted on Facebook that Moore “indeed was a fine connoisseur of the arts, a passionate man, so immensely generous and genuinely interested in what was in the works in our business.”

“A lot of my thinking circles around empowering the audience to develop intellectual curiosity,” says Neef. “It does take a certain amount of confidence to have that. And I think Roger did have that confidence, in his own intellectual capacity to understand things he didn’t know. I think far more people have that capacity than they think, but not everybody has the courage to embrace it. Roger totally did, and that’s what set him apart.”