This spring, in lieu of its usual run of a fully staged opera given four performances with different casts, UofT Opera offered “Opera in Miniature: A Festival of One Act Operas.” There were five performances over four days with one show repeated with a second cast. Of course, in this time of plague the works were presented via Youtube with rather severe staging limitations and piano accompaniment.

First up on Thursday Apr. 22nd was Massenet’s Le portrait de Manon. It’s a sort of postscript to his earlier, great work, Manon, here with the aging Des Grieux still obsessed by Manon. His young ward Jean, vicomte de Morcerf, is madly in love with Aurore, a girl possessing neither name nor fortune. Tiberge, a dependant of Des Grieux, tries to persuade him to allow the marriage without success. The lovers despair and plot suicide, rather ineffectually. Tiberge reveals he brought up the young Aurore and that she is actually Manon’s niece and so, Des Grieux relents.

Musically the piece is pleasant enough in an entirely predictable way but hardly sets the world alight. It’s well sung by the young cast. Baritone Parker Clemens as Des Grieux has to pretty much carry the first half of the opera and he does so well. Mezzo Lindsay Connolly is ardent in the pants role of Jean and soprano Sacha Smith is an attractively sweet toned Aurore. Tenor Angelo Moretti makes a decent job of the less exciting part of Tiberge. Russell Braun conducts with Vlad Soloviev at the piano. He does a very competent job as most of the time the cast can’t really see each other. This is a function of a set which consists of four physically separated cells (rather like a Katie Mitchell production without doors). The reason for doing this is obvious and I think it reflects credit on director Michael Patrick Albano and the singers that they generate any chemistry at all. It’s an enjoyable enough 50 minutes.

Friday Apr. 23rd’s offering was a double bill of Wolf-Ferrari’s Il segreto di Susanna and Mozart’s Der Schauspieldirector. The former is a farce based on a rather lame joke. A man thinks his wife is having an affair because he smells cigarette smoke in the house. Of course, shock horror, it’s the wife who is smoking. Played as a farce the piece can just about sustain the joke, but without that genre’s madcap comings and goings due to the ‘cellular’ set used here, the scenario is very weak. Juliana Krajčovič and Alex Mathews sang very well and did about as much as they could to bring it alive, but it really wasn’t enough.

The Mozart was better. There was an introduction written by director Michael Patrick Albano and spoken by conductor Russell Braun that got things going. This time there was a slight variation in presentation with David Walsh as Vogelsang and Heidi Duncan as M. Herz in their cubes, separated by a giant computer screen showing Noelle Slaney as Mme. Silberklang. Both sopranos sang well and were totally convincing as battling divas. Walsh was a very competent referee/flatterer. Overall, the humour did come across here and the work has a bit more depth dramatically and musically than the series’ earlier offerings. 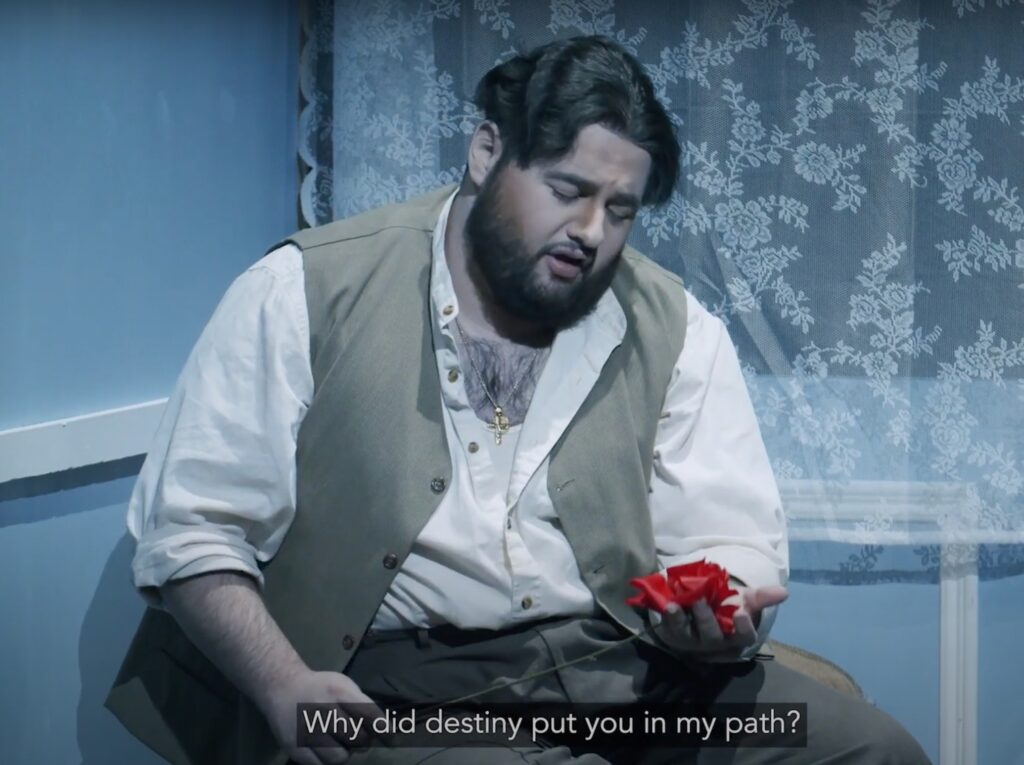 Peter Brook’s reconstruction of Bizet’s Carmen, La tragédie de Carmen, premiered the afternoon of Saturday Apr. 24th. It’s an effective recreation of a well known piece. There was real chemistry and fine singing from the Carmen of Alex Hetherington and the Don José of Elias Theocharidis.  It’s no mean feat to produce some kind of sexual frisson when the principals have a wall between them. Mélissa Danis as Micaela also read the linking narrative clearly and with feeling. Luke Noftall contributed as Escamillo as well as the other baritone parts. Sandra Horst directed from the keyboard and made a convincing case for presenting the piece with a piano score. There was a second performance of this piece on Sunday afternoon with a different cast (not reviewed).

The Saturday night (Apr. 24th) program featured a double bill of William Walton’s The Bear based on a story by Chekhov, and Lee Hoiby’s homage to Julia Child, Bon Appétit!, in productions by Mario Pacheco. The set for the Walton was wood paneling with curtained windows which made a pleasant change from the repurposed set used elsewhere. Renee Fajardo and Nicholas Higgs interacted beautifully as the widowed recluse and the boorish ex-artillery officer who come close to fighting a duel before they realise they have fallen in love. Luke Notfall seemed much more at home as the grave servant Luka than he did as a bullfighter in Carmen. Excellent singing and acting all round. Andrea Grant, ably backed up by the cast, made the most of Walton’s witty, often jazzy, score. For me, this was the highlight of the week. 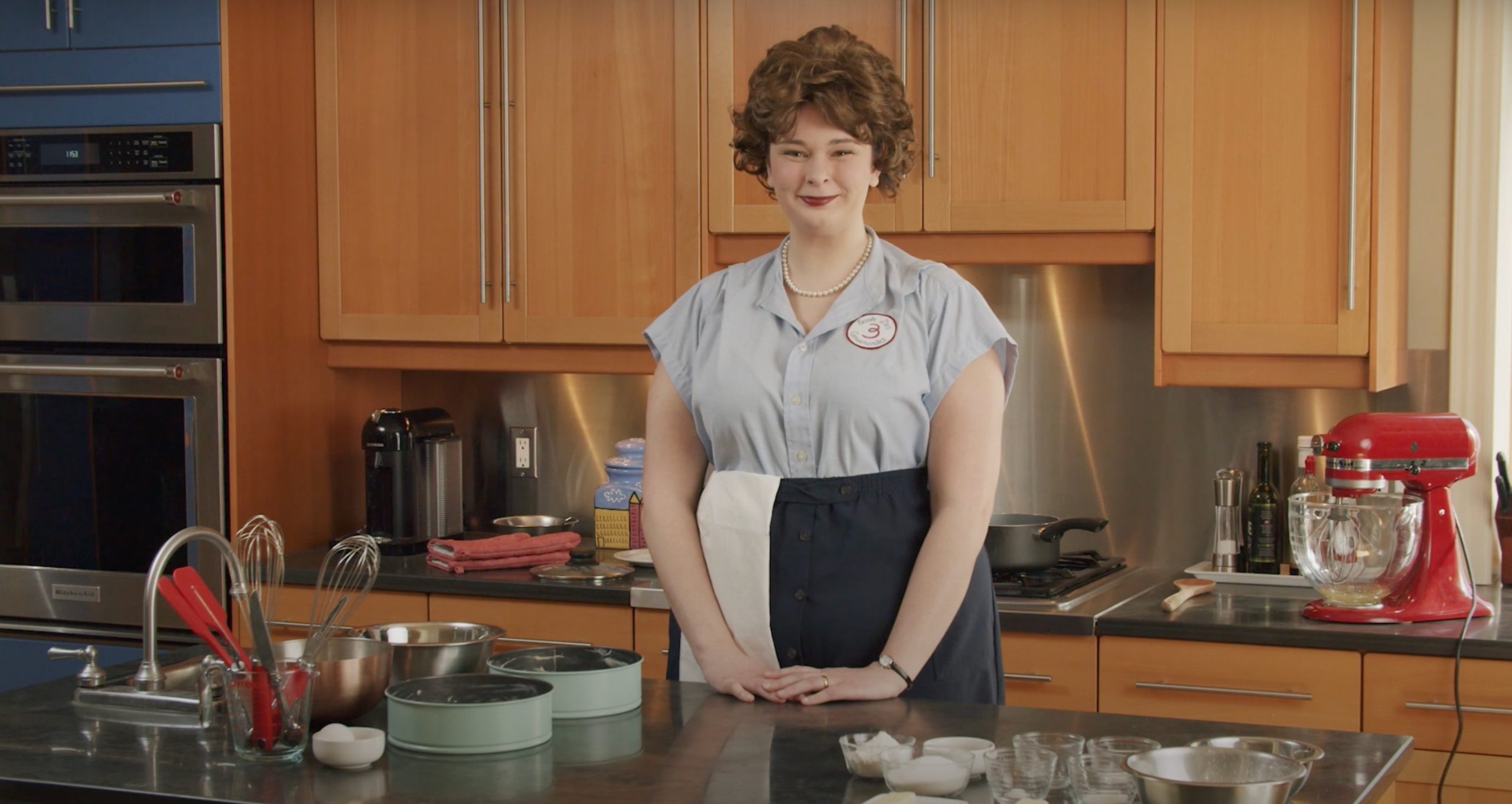 The Hoiby featured Alexandra Fee as a completely convincing Julia Child look-and-act alike. This was filmed in a real kitchen (a rather nice one) and was all the better for not feeling like a Covid staging. It’s a one joke piece, but the joke’s a good one and it came off effectively here.

In conclusion I want to comment on the approach taken to producing these streams. I understand that UofT Opera needs to create performance opportunities for their students but I really have to ask whether filming shows staged under Covid conditions is the way to go. Might it not have been better to go all the way and make a series of films that abandon the artificiality of a proscenium arch and the need to reuse sets for multiple productions? Chintz curtains may make an effective backdrop for Des Grieux’ country house but they look distinctly odd behind Don José and Escamillo. Soundstreams, Tapestry Opera and other companies with limited resources have shown that it’s possible to do highly effective location shoots under Covid conditions as UofT Opera does here with the Hoiby piece. For my money, location filming has produced far more compelling material than streams staged under prevailing Covid safety conditions and I really wish that UofT Opera had gone (further) down that road.

Reservations about production approach aside there’s much to enjoy in these UofT Opera shows.  The technical quality is good across the board and all are currently all available on demand on the company’s YouTube channel. I’ve had no word on how long they will remain there, so catch them while you can.