An Experiment in opéra comique

On Oct. 9th, 10th, and 11th, Opera Lafayette will present The Blacksmith to a live audience at Reddert Ranch in Mancos, Colorado. Real livestock, mountains and bales of hay will be the set for this 18th-century French opéra comique adapted to the American West with Canadian singers.

“I wanted something that would speak not only to the more artistic types…but also to the older ranching population here,” said Ryan Brown, Opera Lafayette’s founder and artistic director. Brown has a plethora of roles in the production, both on the ranch and in the orchestra, and knows the community well. 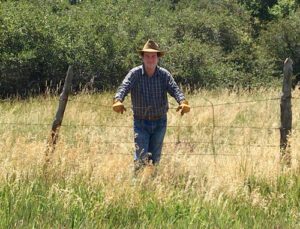 Brown and translator Nick Olcott created this adaptation of The Blacksmith composed by Françoise-André Philidor in 1761 to be sung and spoken in English. In this modern premiere, the story takes place in the town in southwestern Colorado where it is being performed.

Pre-pandemic performances were scheduled at Mancos Opera House. Serendipitously, they now will be held at the ranch where Brown is the family manager, immersing audiences into the story.

Part of Brown’s motivation, he said, was “having this long standing family connection to the West and being interested in figuring out whether what we do could be of interest to rural populations who don’t usually see opera of any form–maybe musical theatre, but less opera. And so it started out as this kind of experiment.”

The Blacksmith weaves folk songs from the Alan Lomax Collection of 19th century America with a complex operatic composition from 1700s France. The two integrate more smoothly than one might think, as the original used popular French folk songs to appeal to audiences of the time. The story celebrates rural themes and the new version urges audiences to join in familiar tunes like “The Old Grey Mare” and “Red River Valley” with the opera singers.

“There are these comedic scenes which speak to everyone easily,” Brown said. “And so [I’m hoping] that people who both might have had a predilection for going to a theatre if there was one available in the area, and people who might not normally do that, will both be under the same roof–or under the same Big Sky in this case–and enjoy something together.”

The Canadian blacksmith in Colorado

Baritone Dominique Côté sings the titular role of Marcel in The Blacksmith. He calls this production “one of the first barn operas of history.”

“My character is so far away from me. He’s like an old-style dad who wants to marry his daughter with one of his friends, old and kind-of rich…and obviously, she doesn’t want to marry him because she’s in love with the pretty young cowboy.” Côté said. “I always liked it when I played something super far away from me, because I really feel that I am someone else; I can try to say something I would never say in my life.” 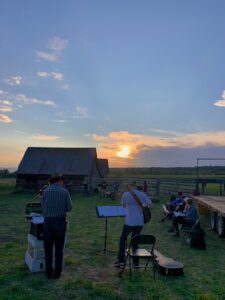 Everyone involved in the production quarantined for two weeks prior to rehearsals in adherence to Opera Lafayette’s safety guidelines, even though Colorado does not have a mandatory self-isolation period.

“Because I’m Canadian…I’ll have to do two weeks in quarantine at home, too. So it’s a month of quarantining for a production,” Côté said of returning home after the show. “It’s okay for now because things are difficult, but I can’t do that every time I have a contract. It’s like, for a one-month contract, it’s one month without any possibility to work because you’re in quarantine.” 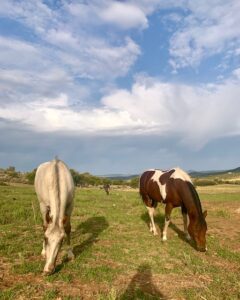 Opera Lafayette plans to perform The Blacksmith in New York and Washington, DC when conditions become amenable, and Brown said he hopes to tour the show to more rural areas. In the meantime, each group will sit at a safe distance from other audience members and at least 25 feet from the performers.

“We must remember, everyone, everyday that [COVID-19] is still there and we are safe because we did all of this [preparation] before,” Côté said. “We must keep it this way because everything can change if someone gets COVID–if someone gets sick, we cancel everything.”

The Blacksmith is presented in partnership with Mancos Creative District; proceeds will benefit the creative district and the Mancos Cattlemen’s Association. Performances will begin at 5:00 p.m. each evening and end at sunset.