On paper, As One seems perfect. At a time when high-profile trans stories with trans people in the creative team are still few and far between, As One—an opera with music by Laura Kaminsky and words by Mark Campbell and Kimberly Reed—not only has a trans co-librettist, it’s also been named one of the most-produced new operas in North America by Opera America in 2017/2018.

Yet, if you talk to trans artists in opera, you’ll quickly find that most are lukewarm about the show at best. What accounts for this disconnect?

Many of the reservations stem from its casting. The show is about a single protagonist, Hannah, a trans woman, but she is portrayed by two different singers simultaneously: Hannah Before, a baritone, and Hannah After, a mezzo-soprano. Hannah Before generally represents Hannah’s younger, pre-transition self (when she was living as a man), while Hannah After represents her older, post-transition self (when she starts living as a woman). Reed, the opera’s trans co-librettist, describes this as a way of representing the mix of masculinity and femininity that she sees in each of us.

This is where the problems start. Since Hannah Before represents both pre-transition Hannah and her masculinity, it makes sense to cast a man in that role, just as it makes sense to cast a woman to play Hannah After. Ideally, since this is a show about a trans woman, one would cast a trans woman specifically. Unfortunately, Kaminsky’s music makes that almost impossible.

The reason is one that’s familiar from puberty: hormones.

Among its many effects, testosterone deepens the human voice, but this change isn’t reversible — once your voice drops, it stays dropped, even if you switch from having a lot of testosterone in your body to a lot of estrogen instead. This means that most trans women sing in the tenor or baritone range. I can count the number of trans women who are professional operatic mezzo-sopranos on one hand. As One’s music excludes almost all trans women from the role of Hannah After.

As a result, Hannah After is almost always played by a cis woman, as she was in Orchestra classique de Montréal’s Nov. 20th production (a cis woman is simply any woman who isn’t trans).

This has several unfortunate consequences.

The first is that it implies that cis women are the ideal of “real” womanhood which trans women are imperfectly attempting to copy. Because Hannah After represents Hannah’s femininity, the role inherently presents an ideal of what it means to be a woman. Casting a cis woman in the role says that to be a woman is to be a cis woman, specifically.

Since that’s a threat to their sense of self, they resort to violence to resolve the contradiction. In the year since last year’s Trans Day of Remembrance alone, at least 350 trans people were murdered, the majority of them trans women of colour, making this the deadliest year on record. These patterns are much more dangerous for trans women who aren’t white, and similarly for those who do sex work.

If that weren’t bad enough, the results of casting cis actors to play trans characters are artistically sub-par. Instead of playing the character, cis actors often play the character’s transness, reducing our lives to a costume to be donned and taken off at will. Our lives are not a costume; we cannot simply stop being trans at the end of a day’s rehearsal.

This feeds into a larger issue: casting cis actors amplifies the wrong voices in conversations about trans lives. This is apparent in the interview after the Orchestra classique de Montréal production. Singers Phillip Addis and Sarah Bissonnette spoke eloquently about gaining a new understanding of trans lives, but they cannot speak about the experience of living those lives, because they don’t. Tranna Wintour did her best to guide the conversation deftly through the post-performance panel, but she remained in the seat of the interviewer while cis allies were given a platform to speak.

The result is dehumanizing–trans communities treated as objects of study, not as experts in our own right.

Short of re-writing the score, there’s not much to be done for As One. Despite the good it’s done by introducing people to the basics of trans existence—and I do think it’s done good here—it’s a show that amplifies cis voices, elicits sub-par performances, and strengthens the very ideas that lead to the violence that Trans Day of Remembrance commemorates. It’s a pity that such a popular work has these flaws; let’s hope the next viral opera about trans people will do better. 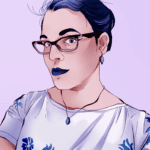 Nonbinary artist brin solomon writes words and music in several genres and is doing its best to queer all of them. After majoring in composition at Yale University, solomon earned its MFA in Musical Theatre Writing at NYU/Tisch in 2018. Its latest one-act, Have You Tried Not Being A Monster, has been described as “agitprop for Julia Serano”, and its music journalism has appeared in VAN Classical, San Francisco Classical Voice, NewMusicBox, Symphony Magazine, and other publications.