One good parody deserves another. And so it was with the Hamburg State Opera’s revival of Barbe & Doucet’s 2014 production of Offenbach’s three act opéra bouffe, La belle Hélène (seen Dec. 31, 2017, the third of six performances, playing until Jan. 19).

Offenbach’s delightful 1864 La belle Hélène, with its libretto by Meilhac and Halévy sharply satirizing Second Empire mores, is a parody of the mythological tale of the most beautiful woman in the world, Queen Helen of Sparta, and her elopement with Prince Pâris of Troy, their affair sparking the Trojan War.

For Hamburg, the Canadian team of stage director Renaud Doucet and set and costume designer André Barbe updated La belle Hélène from mythological Greece to the swinging Sixties, drenching it in a veritable carnival of pop culture references. Act I wasn’t set at the Temple of Jupiter, but on the cruise liner SS Jupiter Sartor. Act II wasn’t in Hélène’s palace digs, but in her suite on the liner. Likewise, Act III wasn’t played out on Nauplia’s seashore, but on the ship’s deck, a pool filled with blue rubber balls placed centre stage. In Barbe & Doucet’s all’s-well-that-ends-well ending, war did not break out as Hélène and Pâris took flight, up, up and away in their beautiful balloon.

Reprising her role as Hélène, Jennifer Larmore gave a priceless comedic send-up of a hot-to-trot diva, replete with an extemporized fanciful cadenza that included a snippet from Carmen’s “Habanera” sung during the final word of her Act III line, “C’est encore la fatalité.”

Peter Galliard, again at Larmore’s side as Ménélas, Hélène’s disinterested husband, was a voluminous tenor, both vocally and physically. Ménélas, here portrayed as gay, was accompanied by a boy toy played by actor Apostolos Dulakis. 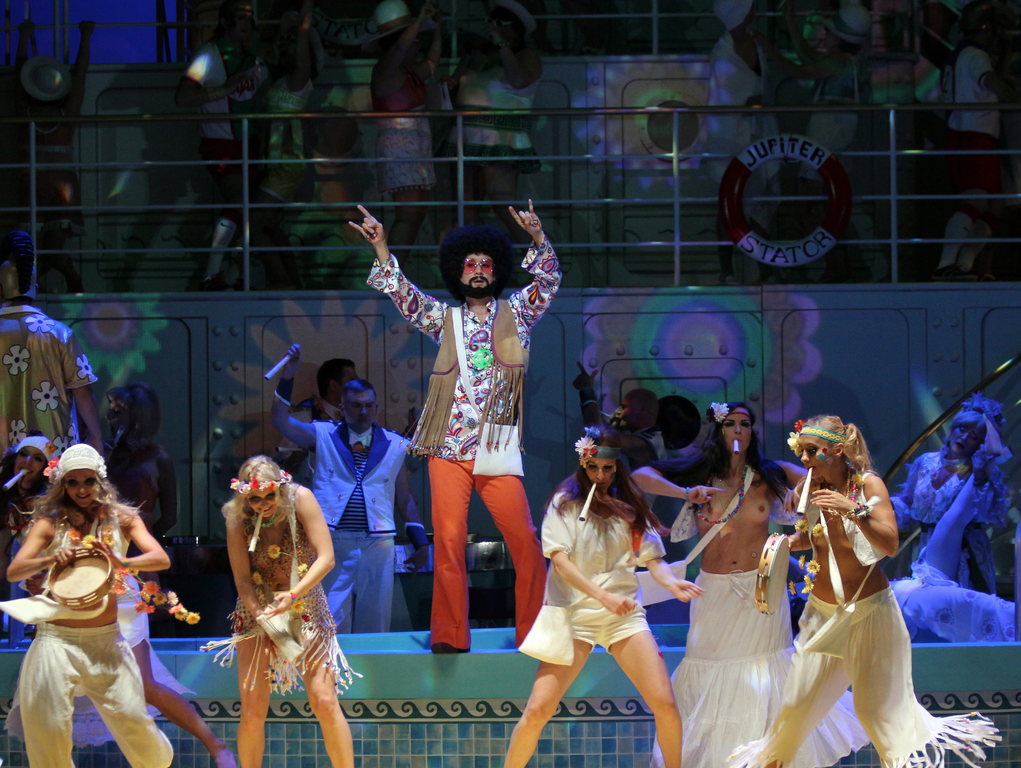 With his slender build, white outfit and wig of golden curls, an obvious nod to Victor Garber’s Jesus in Godspell, Korean tenor Jun-Sang Han was a peachy keen Pâris. In Act III, disguised as the High Priest in a Mod Squad-era black afro and beard, Han unmasked himself as Pâris just as he and Larmore’s Hélène departed.

Former Metternich and Hotter student, bass-baritone Otto Katzameier displayed a warm, round tone as the pseudo-dignified Calchas, chief augur of the temple, here Captain of the SS Jupiter. 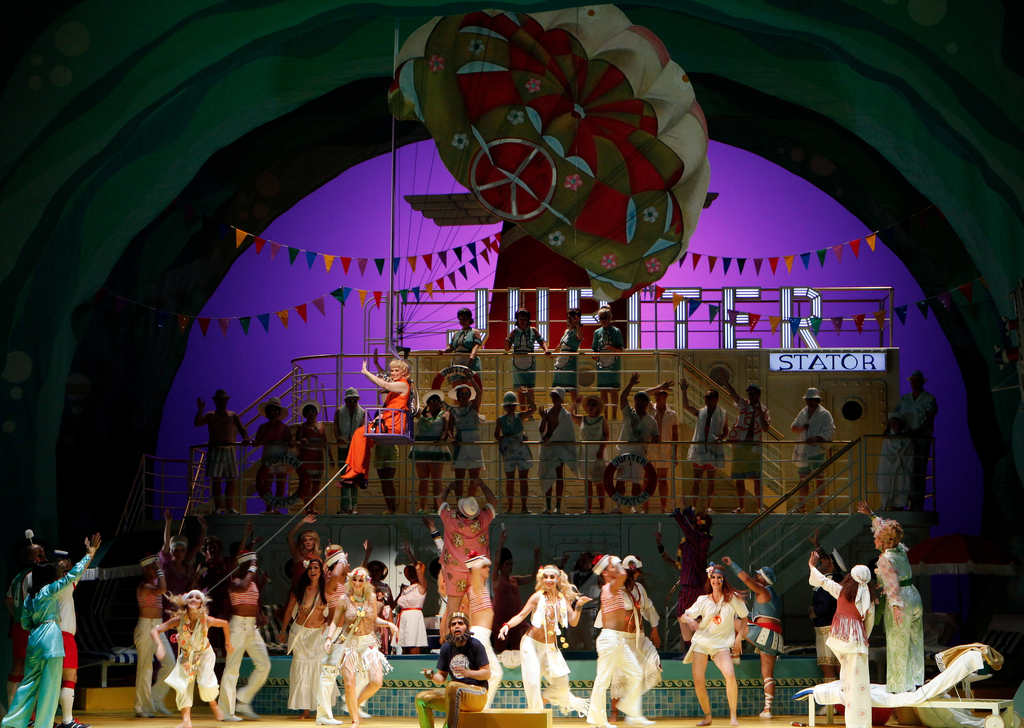 Countertenor instead of a mezzo!

The most notable change from the 2014 production, not to mention the 1867 Hamburg premiere of La belle Hélène, was having a countertenor rather than a (mezzo)-soprano in the pants role of Oreste. Croatian-born countertenor Max Emanuel Cencic provided much mirth as Agamemnon’s playboy son, outfitted à la Mike Myers’ Austin Powers.

Tenors Sergei Ababkin and Julian Rohde, Ajax premier and Ajax deuxième respectively, were predictably outfitted as footballers from the Dutch Eredivisie’s AFC Ajax. Apart from their small singing roles, they spent most of their time on stage passing a soccer ball back and forth.

Achille’s legendary bum heel was just the trick for a gold lamé-suited Ziad Nehme to break into a Chuck Berry-esque duck walk.

Some of the original dialogue was trimmed, though in Act III, Agamemnon humorously interpolated “To be or not to be,” after Ménélas’ “J’expire,” whereupon the latter retorted, “Nicht Shakespeare, j’expire.”

In the pit, Canadian Nathan Brock brought out the Mozartian grace of Offenbach’s score, but had brief bouts of difficulty keeping the Philharmonisches Staatsorchester Hamburg and Eberhard Friedrich’s Staatsoper Hamburg Chor precisely together at the beginning of Acts II and III particularly when the chorus was singing from the cruise liner’s second and third levels. In Act 2, one could feel that Larmore wanted to push the pace of Hélène’s “Invocation à Vénus,” though Brock never budged from his tempo.

With the Greek financial crisis now mostly in the rear-view mirror, the Act III cameo by a Chancellor Angela Merkel look-alike pushing a wheelbarrow full of Euros across the stage at Ménélas’s line, “Oui, mes enfants, vous les payerez!” was cut completely from this revival.