There are operas whose musical and dramatic brilliance does not show signs of ever running out, hundreds of years into their production history. Then there are operas which make you wonder if the art form is deader than a museum piece. If you plan your opera going carefully, you can avoid the latter kind for a long time, but if you’re in Toronto this spring, your luck has run out: the Canadian Opera Company is closing its 17/18 season with Donizetti’s Anna Bolena (seen Apr. 28).

The piece is burdened by a combination of factors. Felice Romani’s libretto is about a very specific episode (break-up of marriage No. 2, beginning of marriage No. 3) in the life of a very specific monarch (Henry VIII), and does not leave much room for directorial reinvention. It is, of course, historically inaccurate: Donizetti’s Bolena gets repudiated by Henry because of the nonsensical melodramatic intrigue involving her former betrothed and an adoring page (she is essentially guilty of impurity for knowing both men). Henry is also leaving her because he prefers another woman, not because Boleyn couldn’t produce a male heir—an historical fact around which a much better opera might have been created. And while there are several scenes of conflict that have some potential, the endless supply of bel canto melody slows everything down instead of aiding the drama. 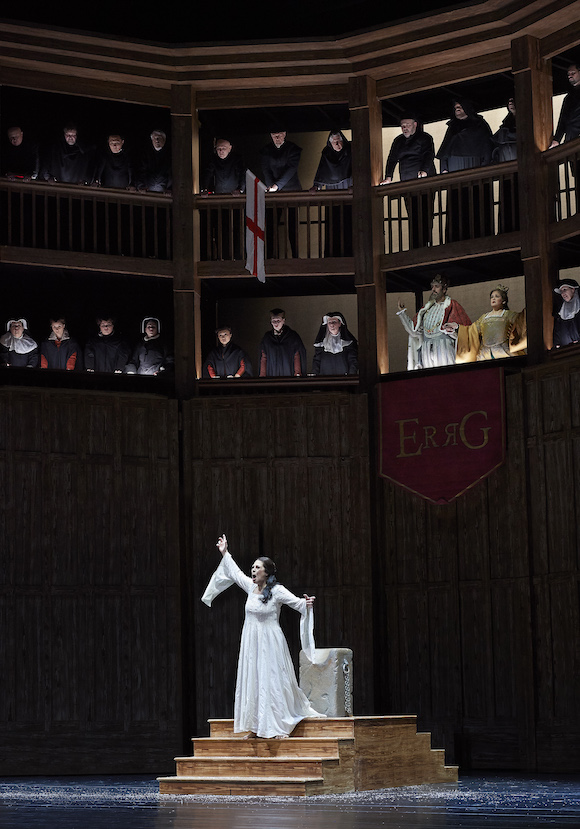 But certain star sopranos insist on singing this role, so there are numerous recordings available (Callas, Caballé, Scotto, Netrebko) and productions are still being mounted in opera houses that want to engage these singers.

Director Stephen Lawless seems to have given up on the task of creating a piece of compelling theatre from the get-go. The set is made out of gigantic walls of wood panelling placed under a two-level balcony, a nod to the Globe Theatre. The panels are rearranged at various points to become corridors, bedrooms, and public rooms. If the personal dynamics between the characters had been worked out with some degree of credibility, this huis clos set-up might actually have been suitable. There was very little acting happening on the opening night, however. By and large, the characters sing facing the audience, not each other, and there is no real emotion among any of the pairs. There is no chemistry between Enrico (Christian Van Horn) and Giovanna Seymour (Keri Alkema) where it’s supposed to be overflowing, and only stock operatic emotion between Percy (Bruce Sledge) and Anna (Sondra Radvanovsky). A rushed, attempted rape—so inept as to be unintentionally comic—is added to the scene of Percy’s private visit to Anna’s bedchamber where she reasserts her virtue.

Keri Alkema, (Giovanna Seymour) is not the nimblest of stage actors (the elaborate skirts didn’t help) and her Italian was very approximate in the early scenes—but she was more and more convincing as the opera progressed and powerful in her last scene with Enrico, when she is finally allowed ascension to the throne. The vocal line sounded almost effortless, sculpted smoothly and precisely, and the acting became more involved. 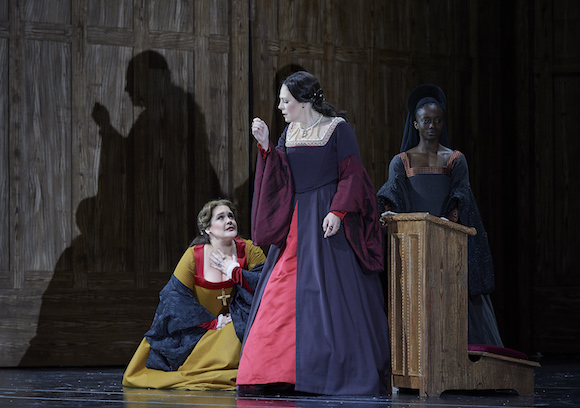 What ought to have been the most dramatic scene of the opera, the confrontation between Giovanna and Anna, did not exactly enthrall. There was some awkward stage movement on both sides but the two women did have moments of real interaction and the voices fuelled and enhanced each other.

Christian Van Horn’s Enrico was a caricature that sang in one mode only: self-important yelling.

Bruce Sledge as Riccardo Percy was the only one among the principals who sounded a natural in this musical idiom. His radiant, voluminous tenor and ease with language brought us the only spot-on Donizettian singing in the show, give or take the odd pushed high note early on. He wasn’t tasked with much acting, but at least there was the singing, which I’d go back for in another production. A name to look out for. 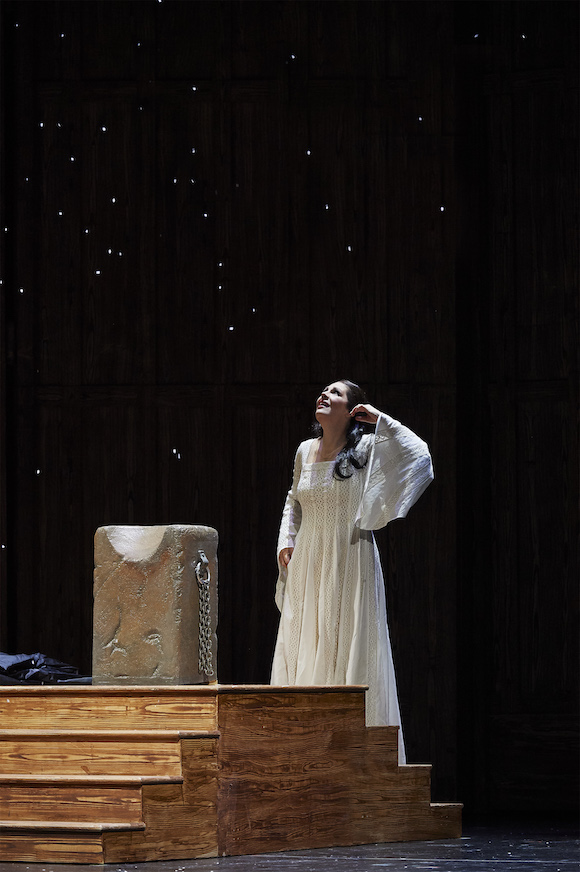 Sondra Radvanovsky made me fall in love with her voice in Aida, and she made me fall out of that love in Donizetti. I’d argue that Verdi is a more suitable composer for showcasing the strengths of her voice but in Toronto we’ve only seen her in earlier bel canto repertoire recently. Here, the bulk of her middle voice had an unlovely metallic sheen. The highs are gorgeous when sung softly (piano and pianissimo.) The loud highs, when called for, are a little out of control, bumpily reached and a bit shouty. Her final, delirious scene had real moments of beauty, subtlety with text and on point portamenti, especially “Al dolce guidami.” It was too little too late.

This Anna Bolena is for Radvanovsky completists—and for those who like their opera in tiaras and elaborate costumes.