Christopher Alden’s production of Verdi’s Rigoletto originated in 2000 at Lyric Opera of Chicago where it was instantly retired after just one outing, not having found favour with that city’s conservative opera audience. Brought back to life by the Canadian Opera Company in 2011, it is now receiving its first revival. Alden, who is no stranger to Toronto (recent seasons have included his Der fliegende Holländer, La clemenza di Tito and Die Fledermaus), must feel some satisfaction that an 18-year-old concept would suddenly be so in-tune with the current zeitgeist. With a devastating critique of the Victorian male patriarchy at its centre, it isn’t that difficult to trace the lineage from Verdi’s debauched Duke to the current crop of sexual predators being toppled from their pedestals in the classical music world.

The concept invites admiration for its probing intellectualism but this comes at a price—by exposing the hypocrisy of Victorian attitudes towards women who are unable to satisfy male expectation either as angels or whores, Alden diverts attention away from the opera’s central father/daughter relationship. Rigoletto may be a cruel jester, mocking the sycophants who populate his master’s court, but he also deeply cares for his daughter Gilda, obsessively keeping her under lock and key at home, lest she fall into the hands of the Duke. The audience needs to viscerally connect with this relationship if they are to feel any sympathy when Rigoletto unwittingly orchestrates his own daughter’s murder.

Instead, we are distracted by invented characters like the courtier Monterone’s daughter—usually only mentioned in passing as one of the Duke’s conquests—here promoted to a non-singing role vividly danced and acted by Sarah Williamson. She appears throughout as a reminder that women are no more than sexual playthings in this old boys club; one of several tools used by Alden to hammer home his message. The end result is alienating. 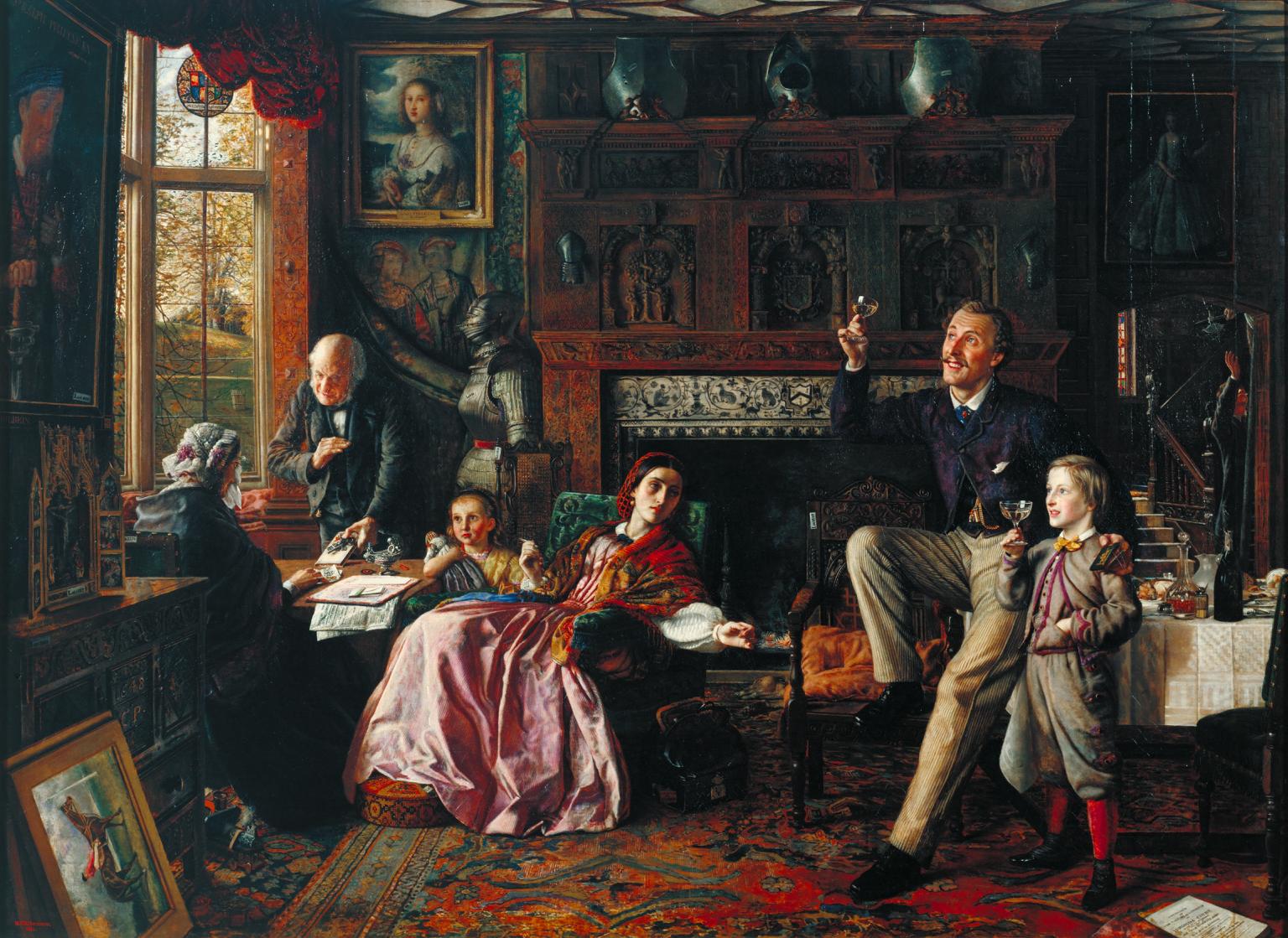 The Last Day in the Old Home (1862) by Robert Braithwaite Martineau. Tate Gallery

Michael Levine’s stunning sets and costumes provide the perfect vessel for Alden’s thesis. The permanent set consists of a highly-polished, thickly-carpeted, burnished brass men’s club. Its hyperrealism recalls the meticulously over-finished surfaces of some Victorian genre paintings and serves as an ironic contrast to the dirty underbelly that lies not far beneath. Duane Schuler’s lighting adopts the chiaroscuro so loved by these Victorian masters—the opening of Act IV with its ring of glowing brass lanterns produced a stunning effect.

The production’s emotional flatness certainly cannot be blamed on the superb cast. Scottish singer Roland Wood possesses a textbook ‘Verdi baritone’: rich, voluminous tone; total ease with even the highest notes he interpolated into the standard score and canny acting instincts that capture the full gamut Rigoletto’s predicament insofar as the staging dictates. 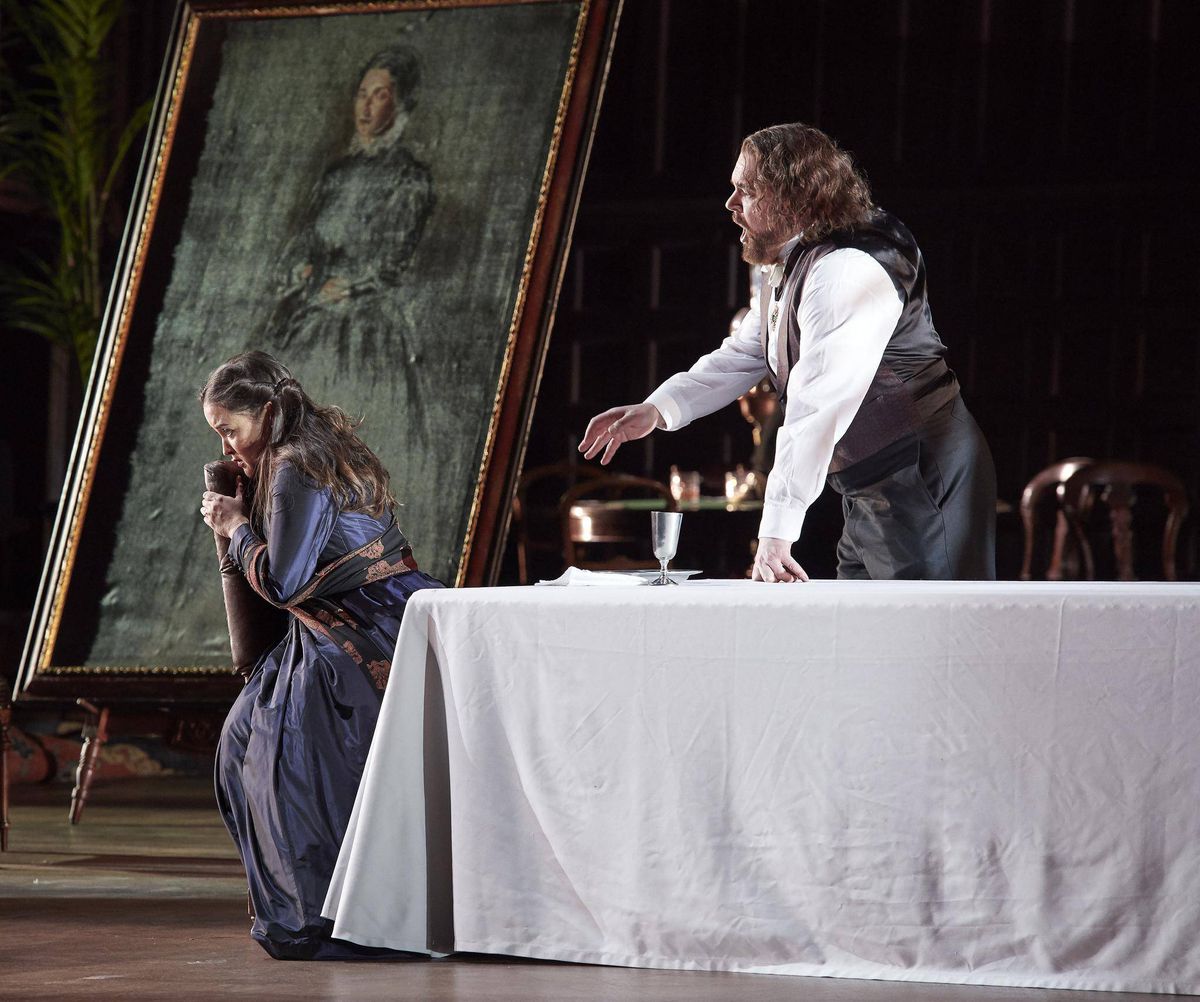 American soprano Anna Christy epitomized the Victorian ‘Angel in the House’—mesmerized by the portrait of her dead mother when we first see her, but longing to quit this confining role model and run off with the dashing student, Gualtier Maldé—the treacherous Duke in disguise. Christy’s iron-clad technique projects her light tone with seeming effortlessness, developing into an even fuller sound as she ascends the role’s considerable heights. The vocal highlight of the evening was the harmonized verse of the duet “Ah! Veglia, o donna questo fior” she shares with Wood, their contrasting tones melding perfectly, finally giving us an entry point into the profundity of their relationship.

Stephen Costello sang the Duke with robust, consistently beautiful tone, perhaps projected a little too unvaryingly and loudly. His stiff stage deportment robbed the character of his seaminess, especially in a staging that offered every opportunity for him to emerge as the worst kind of predator.

Carolyn Sproule, a Canadian mezzo-soprano who has done most of her training and performing in the US made her COC debut as Maddalena, sister of the nefarious assassin-for-hire, Sparafucile. She served notice with her sizeable, rich tone and striking presence. Russian bass Goderdzi Janelidze made a notable COC debut as Sparafucile singing with requisite, inky tone but also, a slightly swallowed projection of vowels and consonants. Bass Robert Pomakov hurled his curse at Rigoletto with appropriate venom, only to later suffer the consequences when hung by noose onstage.

Bass Neil Craighead’s rich bass continues to grow in size—he distinguished himself among a sea of similarly-evening-suited courtiers as the almost-cuckolded Count Ceprano—it’s not surprising he’ll make his role debut as Scarpia in Tosca this summer at Opera on the Avalon. COC Ensemble baritone Bruno Roy (Marullo) continues to impress with his keen use of text and vividly projected tone. 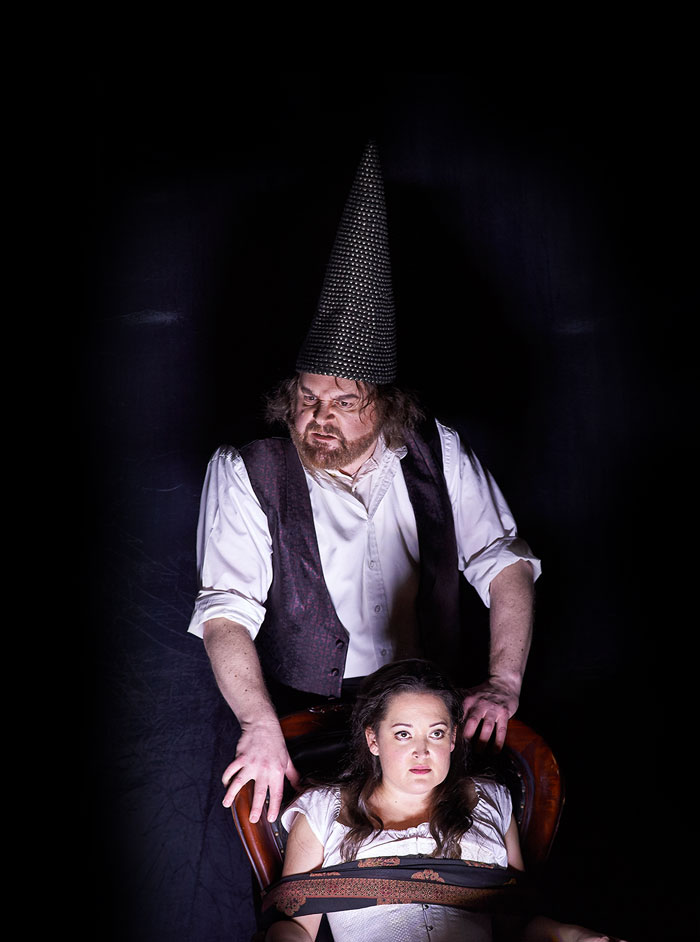 Stephen Lord has become a COC favourite for good reason. He truly understands the idiom—witness his flexible accompaniment, allowing the singers the necessary push-and-pull that defines the 19th-century Italian Romantic style. He pulled all sorts of dramatic, contrasting colours from the COC Orchestra, supplying a lot of the passion and drama that Alden’s concept squelched on the stage. Rigoletto is a deceptively chorus-heavy opera—the COC’s men’s chorus was constantly present, observing and commenting while managing their tricky interjections brilliantly.

Alden’s Rigoletto concept is not a completely way-out-there directorial conceit. It is tightly enmeshed with societal mores from the time of the opera’s production, admirably and at times brilliantly commenting upon them. But in pursuing his thesis so relentlessly, he denies the audience an opportunity to emotionally connect with the characters’ tragedy, making his points, but leaving us untouched.