On 27th June 1918, the Canadian hospital ship, HMHS Llandovery Castle, laden with doctors, nurses and medical supplies, was torpedoed and sunk off the coast of Ireland by German submarine U86. 234 people, including 14 Canadian nursing sisters died. There were only 24 survivors. One of the dead was Sister Mary Agnes McKenzie whose memorial plaque in Toronto’s Calvin Presbyterian Church inspired Stephanie Martin to compose an opera about the tragedy. She recruited playwright Paul Ciufo as librettist and they began to work. The results were premiered in semi-staged workshop form at Calvin Presbyterian on Jun. 26.

Given the limited staging resources and budget, director and dramaturge Tom Diamond chose to present the work as a radio play with some limited props, blocking and costumes. The approach works remarkably well. There is enough drama in the words and music to make staging almost superfluous. In fact, it would work just fine as an oratorio.

At the heart of the piece is Ciufo’s fine libretto. It breaks the story down into nine scenes set on the ship and, at the end, in the lifeboats, before the chorus steps out of time to reflect on what we have seen and heard. It’s not a simple linear narrative but deals much more with the psychology of women going to war in an era where that was being officially recognised for the first time. There’s also real poetry in it. He’s not afraid to use verse forms when appropriate but there is a simple beauty in the language even when presented in prose.

Martin’s music is also extremely well crafted. The score, for voices and a nine-piece chamber orchestra, is varied. At times it is lushly romantic, at others abrasive and atonal. There are even folky elements. It avoids the trap of sounding like a film score backing endless recitative by providing some really engaging vocal writing. If there’s no set piece aria that will leave you humming on your way home, there are some good choruses and ensembles, like an on-deck church service, that provide natural opportunities for more lyrical outpourings.

Produced in conjunction with Bicycle Opera Project, a strong ensemble cast has been brought together, mixing BOP regulars with some new faces. Mezzo Catharine Daniel manages another imperious performance as Matron Pearl Fraser. Her rich tone and commanding presence are deeply impressive. Her foil is soprano Laryssa Koniuk playing Sister Bird McLean who appears to be dealing with fairly severe PTSD but wants to return to the Front anyway. Koniuk’s bright soprano and engagingly girlish acting works most effectively with Daniel’s darker presence. Allison Angelo, playing Sister Kate Gallaher, provides a third dimension as the woman who has seen too much but has sworn to carry on. Keith Lam as surgeon Major Tom Lyon and Owen McCausland as Sergeant Arthur Knight represent the men of the Llandovery Castle; the nearest the opera gets to comic relief. Both gave fine performances with McCausland’s rather beautiful tenor helping to lighten things up a little. Michael Nyby sings Oberleutnant Helmut Brummer-Patzig, captain of U86. It’s a thankless role as the one truly unsympathetic character in the piece and Nyby captures the required nastiness with his characteristically powerful, incisive baritone.

Rebecca Genge, Emma Char and Alexandra Beley complete the cast, playing three more nurses who also form the small chorus. Kimberley-Ann Bartczak conducts and does full justice to the score, drawing both drama and pathos from the singers and orchestra. 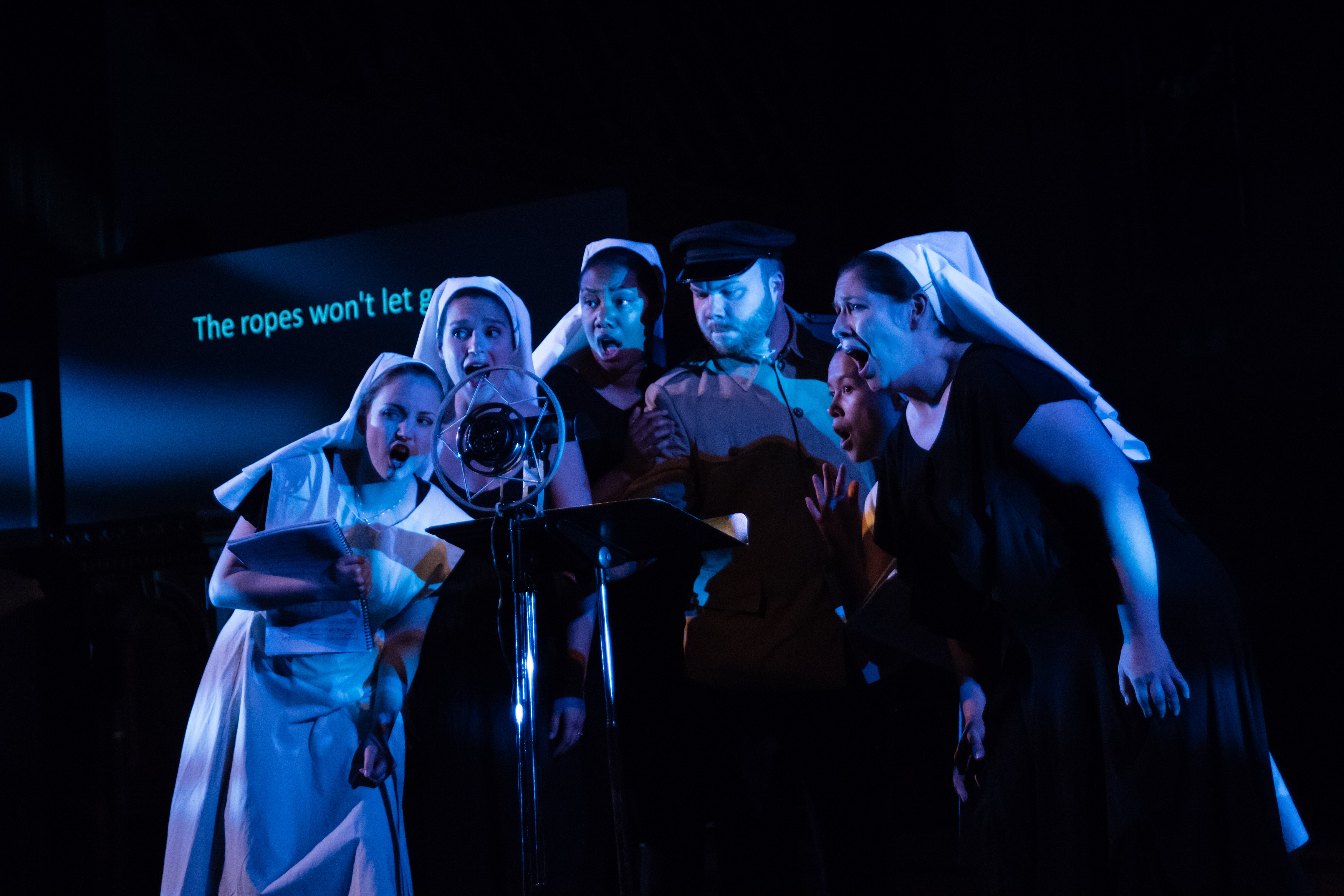 A scene from The Llandovery Castle. Photo: Will Ford

A minute’s silence in honour of the victims of the Llandovery Castle tragedy and the countless other medical personnel who have lost their lives in conflict followed the performance before one of the longest, loudest and most spontaneous standing ovations I have heard in some time.

The Llandovery Castle is a fine piece both dramatically and musically. It has real emotional power and I, for one, felt slightly shell-shocked at the end. I hope to see a fully staged version at some point. Meanwhile there’s one more chance to catch it this evening.