Love Songs-A Saxophony is a collaboration between Tapestry Opera and New Music Concerts; a staged and filmed version of Ana Sokolović’s Love Songs for soprano and saxophone created in the Ernest Balmer Studio. The show aired on Youtube Live Nov. 28th but is it an opera? Is it staged art-song?

Ultimately, I don’t think it’s either but rather a genre-bending experiment in combining music, movement and film. Whatever the genre, it’s a story about love and–more often than not–death in five “thematic” movements: pure love, tender love, children’s love, mature love and love for a person who has been lost.

The lyrics are sung in five languages: English, French, Serbian, Irish and Latin. There are interludes between the movements in which the phrase “I Love You” is delivered in 100 different languages.

In this version, Michael Mori directs soprano Xin Wang and saxophonist Wallace Halladay. The Ernest Balmer Studio is made to seem large and bleak as an ash desert after a volcanic eruption. Props are minimal–a saxophone in a case, a table with a bowl and candles, a pine branch–but these resources are combined in ways that convey the varying moods of the movements and intervals. Light is used as a dramatic device in a production that is generally very dark.

Although each movement of Love Songs has a completely different mood, they are quite lyrical in Sokolović fashion. The texts are either indirect and allusive, or familiar but presented in a disturbing fashion. For example, there’s a dark version of “O Mistress Mine” sung into the bell of a saxophone that’s decidedly short on “mirth and laughter.”

Soprano voice and saxophone are compared and contrasted through the program; sometimes they will play together in a similar timbre but dissonant pitch. At others, the soprano is making saxophone-like sounds. Like much else in the piece it’s oddly disturbing. The saxophone is used fairly sparingly. The singer often sings unaccompanied or with background percussive effects. Only on a couple of occasions is there a notable saxophone solo and, dramatically, there are few occasions when the two “actors” appear together. In one of those, the saxophonist recites “How do I love thee!” rather than playing. 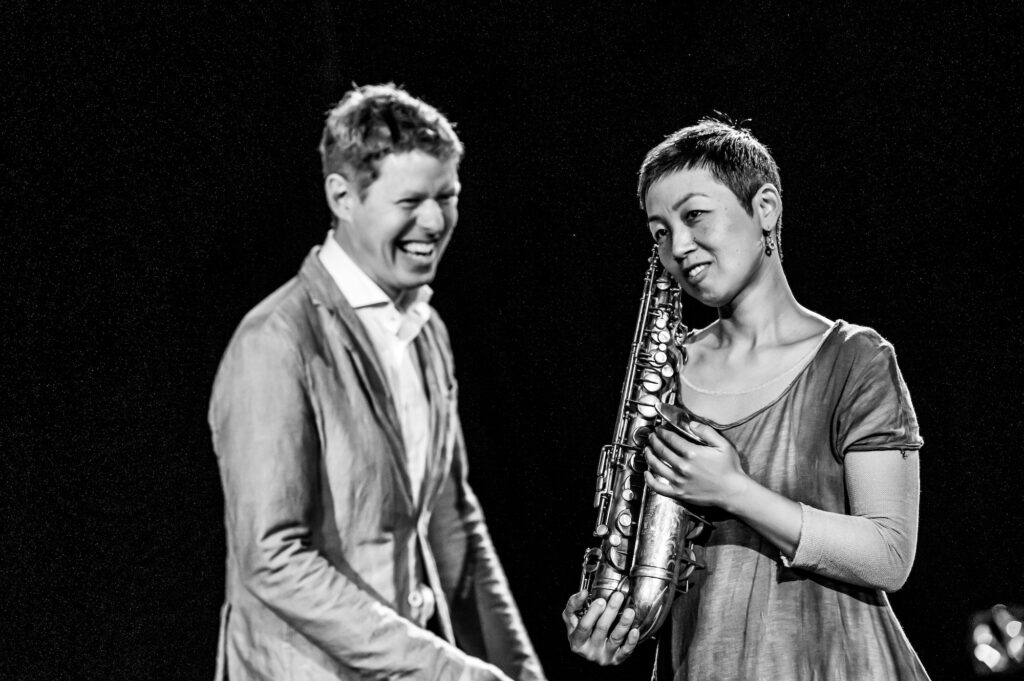 The four “I love you” interludes are less lyrical. They play with rhythm and the different sounds of the 100 different languages with little role for the saxophone. It’s a tour de force of memory and extended vocal technique. It’s striking how the mood changes for each scene and interlude. It’s quite disorienting as, as soon as one seems to have found the emotional register of the piece, it changes again, often dramatically.

The virtuosity of the performers is amazing. Not only is Xin Wang singing in a hundred languages, she’s also using a wide variety of extended vocal techniques and styles. Halladay not only has a wide range of sounds to extract from the saxophone but he has to recite. And, of course, both have to act.

Love Songs is a film rather than a video of a stage show. Director Mori and videographer Taylor Long appear to have put a lot of thought into how to avoid a sense of a fourth wall, to what works in a film and to what new possibilities film opens up. For example, prop and scenery changes don’t stop the action. Use is made of close ups, which seems significant given how dark the set is much of the time. Light sources are used dramatically in ways that wouldn’t work with a seated audience. Clearly Tapestry has invested a lot of thought and learning since they made the decision to go with a virtual season. The film also has professional sound and video quality–the streaming process itself is faultless. It would appear that there’s been research and work in that department, too.

Love Songs is a musically and dramatically rich piece of work that has been reimagined beautifully for film. It’s uncomfortable, even disturbing, to watch but rewarding and memorable. The film is available to view on Youtube.