Vancouver Opera’s production of Eugene Onegin, the mainstay of the 2018 Vancouver Opera Festival, is nothing if not a surfeit of vocal riches.

Three of the four lead singers are Russian and making their VO debuts. All are perfectly cast—consummate actors and singers—it seems almost churlish to consider who might have been ‘best.’

Audiences, however, have no such quibbles and, as often happens with this opera, it was the singer of the relatively small role of Prince Gremin who garnered the most rapturous applause at curtain on opening afternoon, Apr. 29. 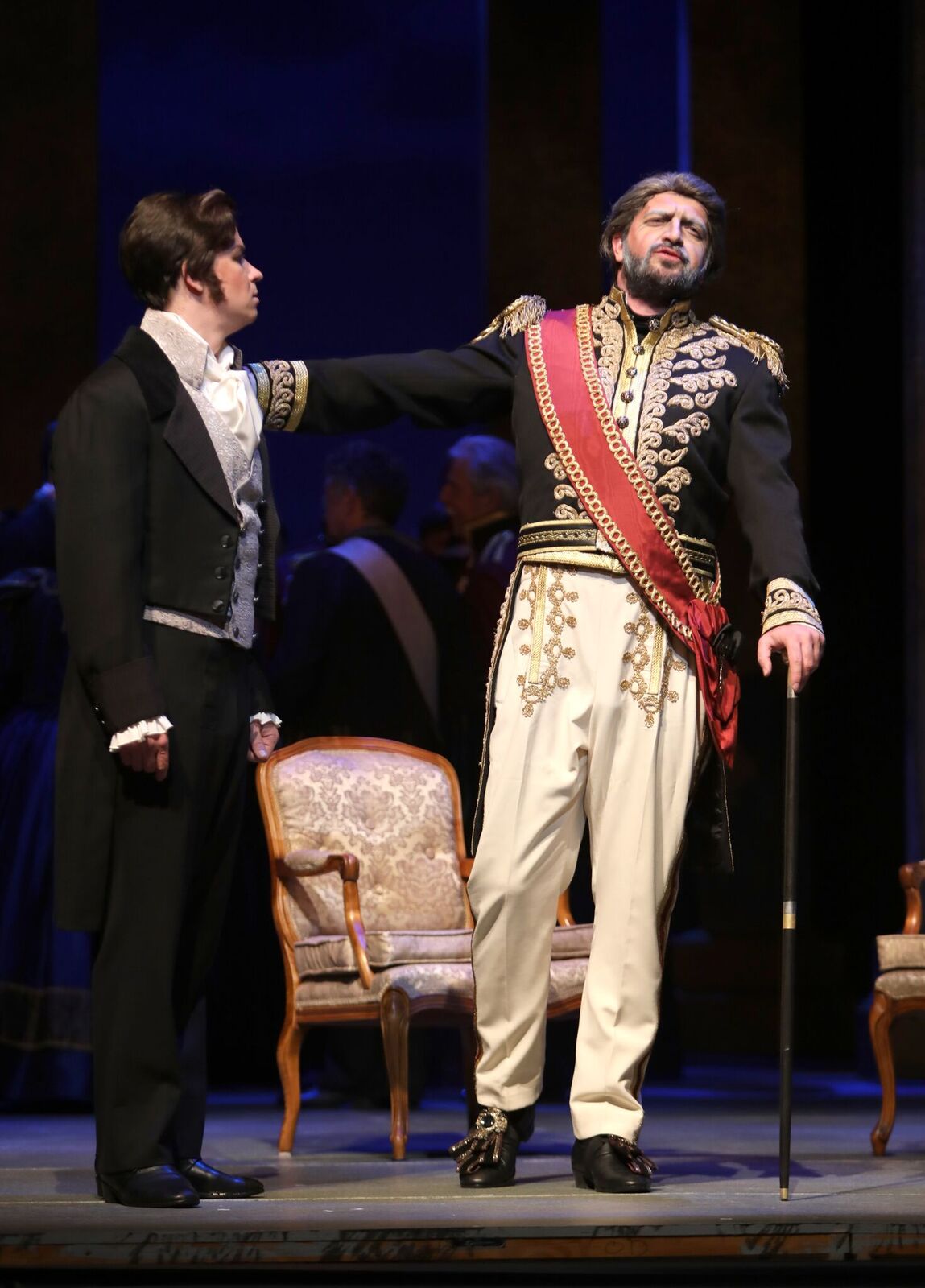 I concede it was well deserved: in the short time he was onstage, Georgian bass Goderdzi Janelidze (who recently sang Sparafucile in the Canadian Opera Company’s Rigoletto) commanded the stage while establishing the essential nobility of his character in some of the most gorgeous and most ‘echt-Russian’ music ever written for the bass voice. Janelidze had a resonance in his low range that many a bass could only dream of. The audience went wild.

But only a little more wild than for Svetlana Aksenova as Tatyana. Her gorgeously pure soprano generated the intense white heat so essential in conveying the steely resolve her character needs to resist Onegin’s persistent advances in the opera’s final scene. Yet, she exhibited tender fragility in her more intimate and vulnerable scenes. Aksenova also made a small nod, shrug or withering glance as telling as a grandiose, sweeping gesture—whatever the dramatic situation required. 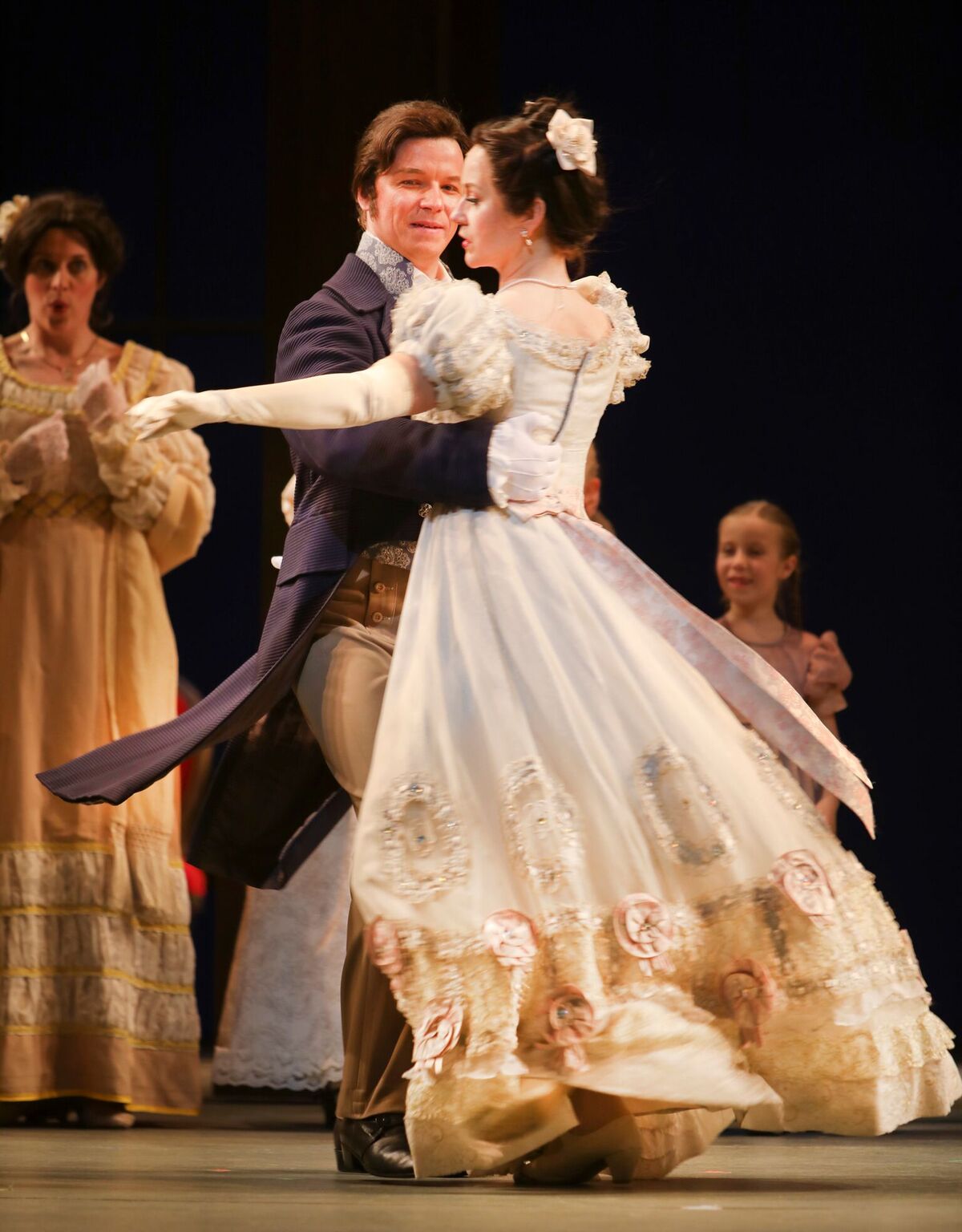 But both Gremin and Tatyana are highly empathetic and, if well sung as they were here, generate huge audience sympathy. What if equally magnificent singing came from a singer portraying a less prepossessing character?

Well, Onegin is not easy to like or even to know. If the intensity of the applause that greeted Konstantin Shushnakov at curtain was comparatively muted, I would like to think it was because he was so intensely believable as Onegin, taking us straight to the brooding aristocrat’s inner world with an eloquence that made him at least understandable if not particularly ingratiating. But then Onegin personifies that “dark ache of the unhappy soul” (as director Tom Diamond described it). Tchaikovsky’s Eugene Onegin hews remarkably close to Alexander Pushkin’s original verse novel and Onegin was a character even the composer did not particularly care for.

Alexei Dolgov was fervently intense as the doomed Lensky, the closest thing to a friend that Onegin has, while Québec mezzo Carolyn Sproule’s expressive Olga, Lensky’s love interest, was richly and sincerely sung. 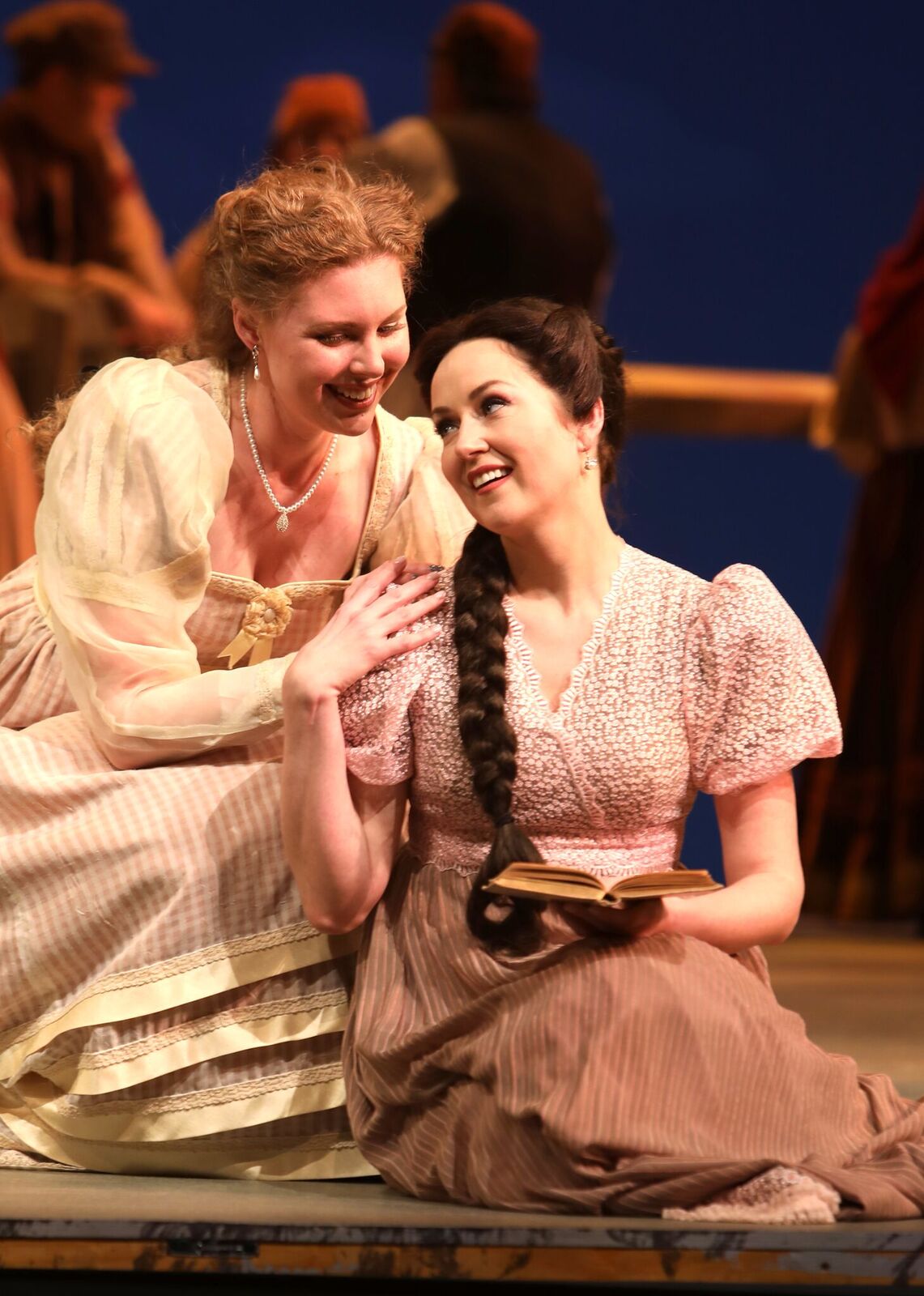 A few ragged patches aside, the orchestra sounded robustly Tchaikovskian under VO Music Director Jonathan Darlington in what I understand was his last appearance in the pit as VO’s Music Director before becoming MD Emeritus. The peasant dances were bursting with exuberant rhythms and the famous Act III polonaise had a vigorous lilt.

The ever-adaptable VO Chorus was robustly earthy when portraying peasants belting out work songs in the fields or richly refined when strutting the stage as cultured aristocrats, producing massive blocks of elegant choral sound in the ballroom scenes.

Diamond’s direction made it clear he knew who needed to be where and when, whether manoeuvring large crowds purposefully about the stage or in intimate, personal scenes such as the opera’s searing final moments when Tatyana and Onegin have their final showdown, only to be torn apart forever. It’s rightly inevitable but no easier to bear when the feelings are so palpably raw. You feel for Onegin, as much as you realize he has only himself to blame.