I’d thought I was arriving early for a three o’clock Sunday matinee—but no, in frustrating fact I was fifteen minutes late for a two o’clock curtain. Mea culpa, and my distinct loss: the 150 minutes that remained of Washington National Opera’s Così fan tutte (20 March) were so pleasurable that I roundly cursed my inattention to the posted starting time.

This Così, in happy truth, was the best I’ve seen and heard in many a year: strong, simple, delivered straight up, without any assertively clever concept to commandeer the piece from its creators, Mozart and da Ponte, who clearly weren’t thinking of 1950s Coney Island (the Met’s current production) or a middle-American high-school boys’ locker room and bleachers (Juilliard’s most recent)—or of Central Park, Fascist-run East Africa, a bare rehearsal room, a cheesy diner, or any of the other alternative locales I’ve encountered over my several decades of Così-going. Some have worked better than others; but none has worked as well as Alison Moritz’s staging for WNO, which had the good sense (abetted by the distinct blessing of a perfect-sized theater, the Kennedy Center’s 1,164-seat Eisenhower) to limit its inventions to those that actually served Così. Working within Erhard Rom’s light-fingeredly period sets—simple drops (a charming indoor wall of Mozart portraits and silhouettes; an outdoor garden with a cheeky pedestaled statue) and movable pieces (adroitly manipulated by the sisters’ household “staff”), Moritz offered no fuss but plenty of fine detail, and elicited some finely pointed acting from her well-balanced cast. At the finale, the two couples—it’s always a Così guessing game, who’ll wind up with whom—switched their original partners; and their chemistry earlier on made perfect sense of this directorial decision.

And as so often happens in Cosìs, the secondary couple—or, rather, the more comically loose-limbed—made the bigger impact, with Rihab Chaieb (Dorabella) and Andrey Zhilikhovsky (Guglielmo) charmingly maximizing all their interactions and encouraging the audience to root for them winding up together. His handsome baritone tended, disappointingly, to disappear in ensembles; but he rose admirably to his recitatives and his two arias. (With Ferrando’s “Ah, lo veggio” cut, each of the four lovers got a pair.) Chaieb was simply a dream of a Dorabella, with her big, easily expressive features, trim figure (looking utterly lovely in Lynly A. Saunders’s elegant costumes), and darkly alluring mezzo-soprano voice, vibrant but never too much so, with an unfailing communicative circuit running straight from the heart to the vocal cords.

As Fiordiligi, Laura Wilde impressed with her strength at both ends of the part’s wide compass, with a bright top and full, firm bottom notes. Right above those latter was a cloudy patch that needs attention; overall, though, this was an accomplished performance of a role that regularly eludes a perfect execution. (Among the many Fiordiligis I’ve encountered live, only Carol Vaness has squarely hit the mark.) Tenor Kang Wang was hardly recognizable as the Elvino of a Met/Juilliard Sonnambula six years back: the shining light-lyric voice seemed to have doubled in size, and his full-out take on Ferrando’s music seemed more appropriate to Verdi’s Alfredo or Puccini’s Rodolfo, roles he’ll be singing later in the year. Still, it’s an exciting instrument, and his steady ardor was a good dramatic foil for Wilde’s conflicted vacillation. 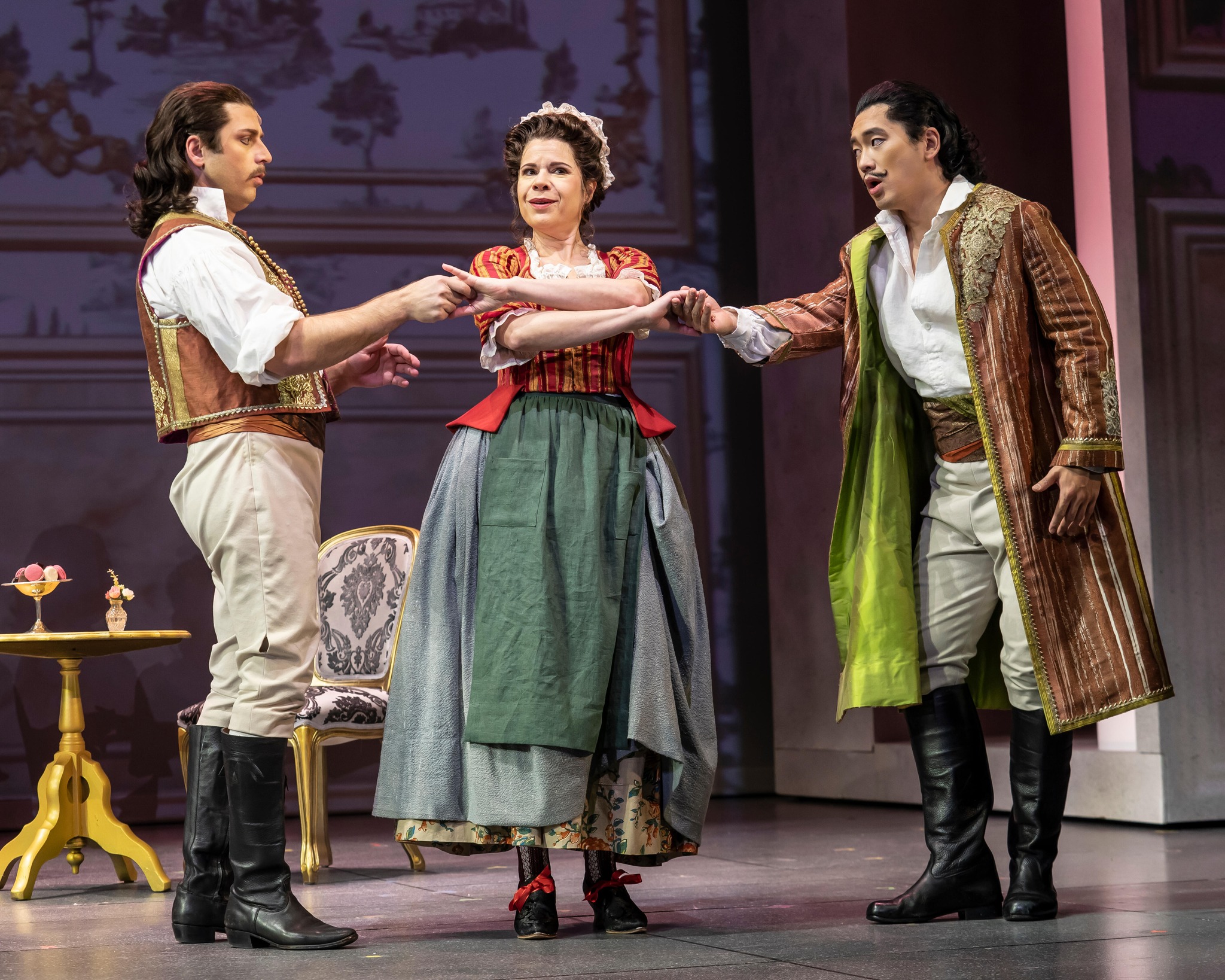 But an impressive chunk of the matinee’s merits belonged to the cast’s two old pros: soprano Ana María Martínez, as Despina (a role debut in this Washington run), and Ferruccio Furlanetto, as Don Alfonso.  She, knowing but never brittle, sang and acted with pinpoint timing and, happily, kept her impersonations of medico and notaio genuinely funny rather than tooth-gratingly obnoxious. He, approaching his seventy-second birthday, showed plenty of voice and the relaxed manner of a true stage animal who’s been treading the boards for nearly half a century. Elegant and astute (but never maliciounly so), when he commanded his two partners in deception, “Ripetete con me: Così fan tutte!”—well, such was his authority that I felt I was being summoned to join right in.

Erina Mishima conducted, invisibly until the very end, when the stage’s rear drop curtain rose to reveal her and her instrumentalists, hitherto arrayed behind it. (The singers could view her via large video monitors affixed to the box tier.) The orchestra sounded recessive at first, but my ears adjusted, and it was good to hear a Mozart opera played with such easy persuasion, with not a hint of us-first assertiveness. It felt as one with the other elements of this performance, whose well-achieved aim seemed to be to deliver something Mozart and da Ponte would smilingly recognize as their Così fan tutte.