Taking a bow: curtain calls for your voice type

Note: this article was originally published on Schmopera.com, and is being reprinted here with permission by the author.

There was a funny little anecdotal post on r/opera, about the habits of basses during curtain calls.

“I have noticed this in many performances, when the singers go out for bowing in a group, the bass tends to be last to leave and holds the curtain and/or claps others on the back as they’re leaving. Is this some secret bass tradition or just coincidence? Because it happens a LOT.”

It’s not exactly a secret bass tradition, but this guy/gal kind of has a point. In the case of the genteel bass, perhaps they’re exhibiting a combination of “ladies first” chivalry, and some unspoken sense of patriarchy over the rest of the higher-voiced cast members. Whatever the reason, it’s old-world charming. Plus, it got us thinking about curtain call stereotypes for the various voice types.*

From top to bottom…

She emerges from the wings with a baby-deer-like trot, full of champagne bubbles and delight. Her final leap onto her centre-stage mark flows seamlessly into her deep curtsy, which bobs back up with effervescent energy and a cheek-splitting grin. With glee, she thrusts her arms forward toward the maestro, her hands bursting into a caffeinated applause; said gratitude is then directed towards the pit, and with clapping hands that resemble the active wings of a hummingbird, she spreads her appreciation from the timpani to the double-basses. One last glint of teeth towards the house, and she skips upstage to take her place among the line-up.

In the case of Lucia di Lammermoor, see below.

Bosom first, she glides across the stage like Morticia from The Addams Family. At centre stage, one hand presses in between her breasts, the other gracefully clutching at her skirts in preparation. One foot invisibly steps upstage under metres of fabric, and the leading lady descends into a curtsy so deep it could convince you that she’s actually only a bust, perched upon a hydraulic office chair hidden beneath her tulle. Her head flows downward with a swan’s grace, and she holds this lowered pose for enough time to make a professional yogi sweat. She rises from the depths, hands poised at her lips in order to launch a slow-motion air-kiss towards the conductor. Repeat. She swishes her skirt upstage and lets the fabric ripples lead her to her place among the cast.

Pelvis first, she jogs from the wings as if to flaunt the freedom of her fitted pants at the skirt-sporting women onstage. She bounces into place, centre stage, and bends at the waist with such momentum that one almost expects her to smack her forehead clear through her own locked knees and land flat on her own shoulder-blades, head upstage. She bounds upwards, hurling one arm out and up in a sort of half-wave, half-salute to the house, before taking a quadricep-tightening lunge forward to clap at the conductor. The leg that lunged is retracted back in a swift motion that resembles the final touches of a gymnast’s dismount, before she bounds like a 10-year-old on a sugar-high toward her castmates. 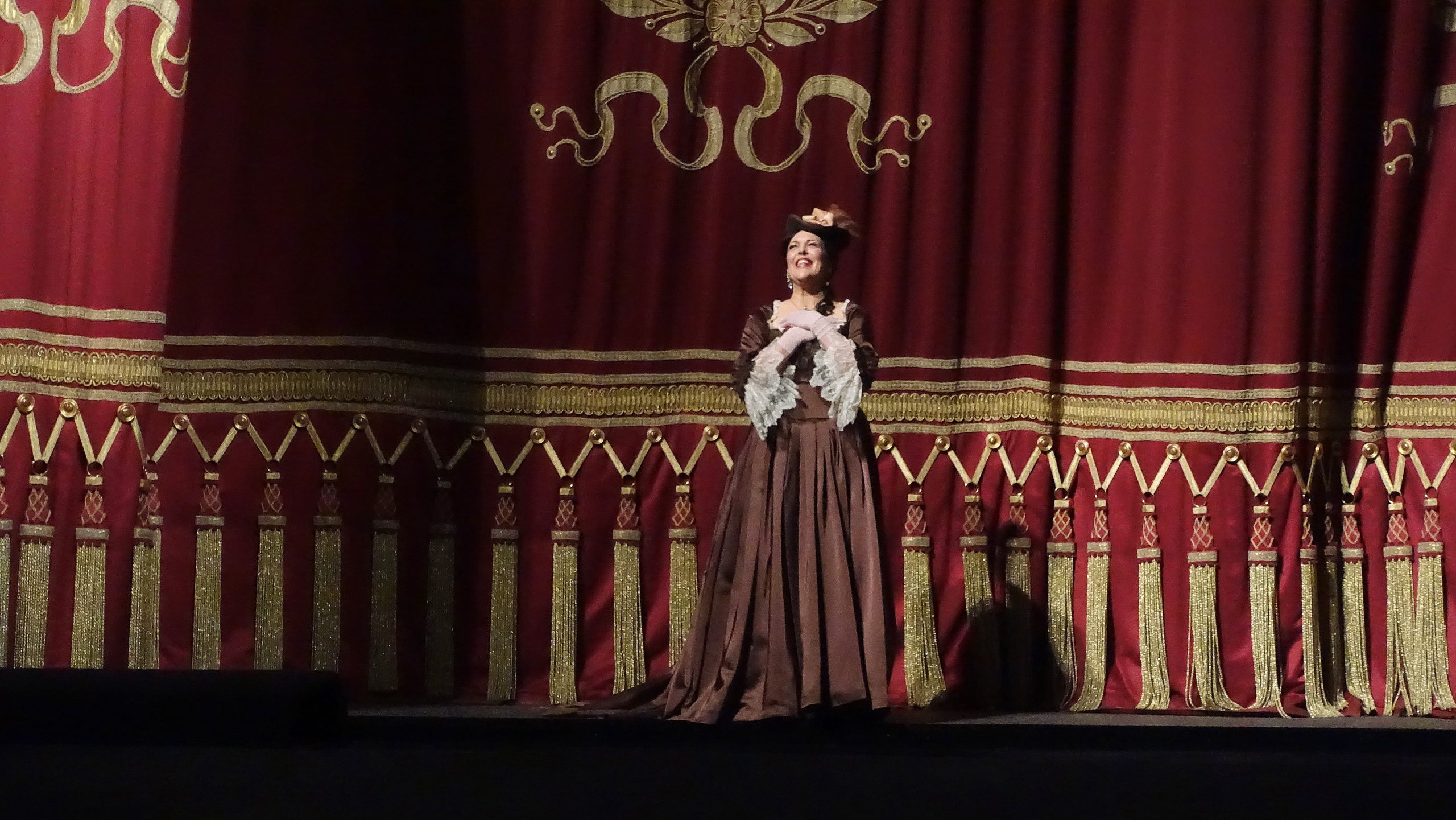 Canadian soprano Adrianne Pieczonka takes a bow at the Bavarian State Opera, after her performance as the Marschallin in Der Rosenkavalier. Photo: adriannepieczonka.com.

He swaggers onstage, head tilted towards the sound of applause. By the time he reaches centre stage, his arms have broadened upwards and outwards into a V, which he hopes will make him look slightly taller. He maintains this hope by bowing only from the nipples up, spending one “hippopotamus” looking at the lip of the stage, and three looking at the middle of the top balcony of the house. Repeat. Repeat. Repeat. He extends his arms, one at a time, towards his fellow castmates, no doubt already lined up onstage on either side of him, so that they know that he knows that the audience knows they’re there. He tears himself away from a fourth “hippopotamus” at his shoes, and walks backwards into the line-up.

He struts calmly onstage, resisting any sudden motion lest it give away his enthusiasm for being there in the first place. He looks out into the audience only after reaching centre stage, and he does this by leading with one eyebrow. He places one hand on his breastbone and bows respectfully, once. He lowers his eyes towards the conductor, and with hands clasped, gestures towards him in a motion that has all the subtext of a fist-bump. He stands up straight, looks again into the audience with one eyebrow and one side of his mouth raised, before striding back into the line-up, where he leans in to share a furtive word with the mezzo beside him.

As if guilted into it by a particularly naggy stage manager, he wanders towards centre stage and glances out into the house with a look that seems to say “fuggeddaboutit”. In a charming show of humility, he struggles to maintain eye contact with the upper levels of the audience, preferring instead to share some unspoken joke with the conductor. He underextends his welcome in the spotlight, and wanders backwards into the line-up, where he slaps the comprimario tenor on the back with shocking force and kisses the hand of the nearest female chorus member. He appears to be guffawing the entire time, as if to say, “I have whisky in my dressing room!”

*Before anyone gets defensive: these are indeed stereotypes, based perhaps on similar anecdotal evidence, but at worst, educated imaginings.