In a profession known for its impermanence, a near 30-year career in opera is a cause for celebration. Since his professional debut in 1991 at Pacific Opera Victoria, tenor Benjamin Butterfield has enjoyed an enviable career both at home and abroad, in a wide-ranging repertoire from Baroque to Contemporary, encompassing opera, concert and recital. Since 2006, Butterfield has been doing double duty, continuing his singing career while passing the torch to the next generation as a voice teacher at the University of Victoria, where he became a full professor in 2016.

Every time I’ve had conversations with Butterfield, I always find him articulate and insightful, revealing a considerable intellect and a true understanding of his art. Even though we conducted this interview by phone, his vivid personality and inimitable sense of humour were very much in evidence. The 90-minute chat went by in a flash:

First let me congratulate you on your upcoming Ruby award!  Can you tell us a little about your upbringing? Do you come from a musical family?

I was born in Halifax, Nova Scotia. My father was in the Navy, and my mother taught in the local schools and at Cedar Lodge for boys. We moved to Victoria BC when I was one. Three brothers and a sister. Music was ever-present in our family. I played the violin and sang in the choir in Christ Church Cathedral. My father played the piano at home, and my brothers (composer Christopher Butterfield and conductor Peter Butterfield) had bands in the house, which drove father nuts!

What was your earliest memory of singing and performing? And your first voice lesson?

I remember singing Gilbert and Sullivan in the car when we went on holidays… also Guys and Dolls, choruses from Oklahoma, that sort of thing. I had my first voice lesson at the Victoria Conservatory of Music, with Selena James. I also studied with Bill Neill and Diane Forlano.

Did you sing as a treble?  Have you always been a tenor?

I sang treble at Glenlyon Norfolk School and at Christ Church Cathedral. I worked at A & B sound in Victoria where I got free records and deals. I remember listening to [German tenor] Fritz Wunderlich in Wozzeck. And Bohème with Pavarotti—[that served] me well when I was asked to sing [Rodolfo] from the pit at Pacific Opera Victoria, never having sung the role before! I got the call at about 2:30 for a 7:00 full dress. I was working with a student at the time when Pat Corrigan [then POV’s CEO] called me to ask if I had ever sung the role. I said no, but I assured him that I had sung sections of it with orchestra, plus I knew it from listening to my favourite recording of it with Pavarotti, Freni and Karajan since I was about 19… I promptly got out my old score, which I had been given by an old teacher in Italy, put on the CD and cranked it to sing along with Pavarotti. After about 20 mins. I called Pat back and agreed to go on… The big reason to do it ultimately was feeling the responsibility to put my money where my mouth was in regards to my students. How could I expect them to be always prepared if I wasn’t? 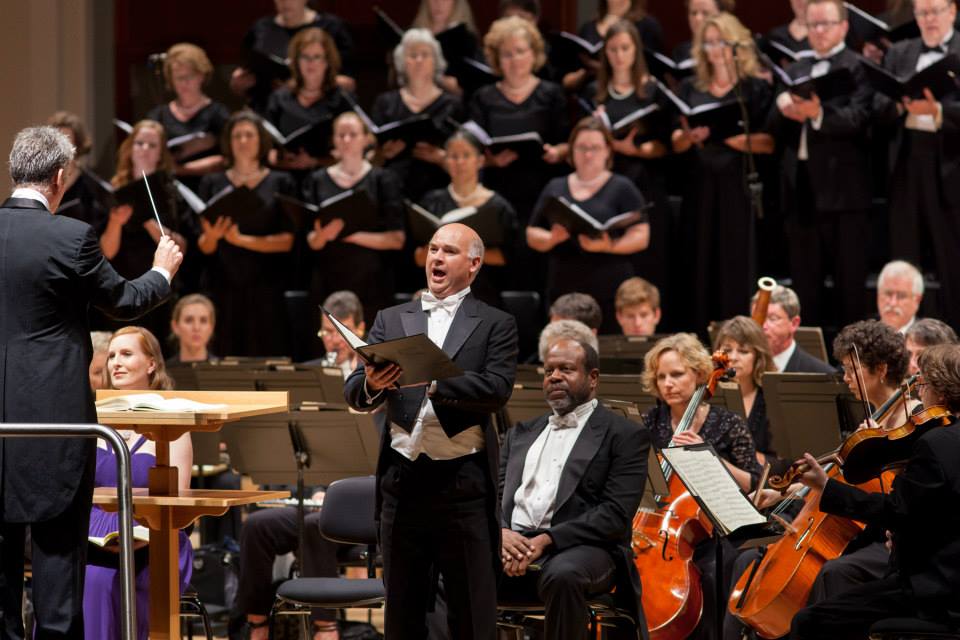 When did you decide that you wanted to have a career in music?

When I heard Richard Margison sing Lensky in Eugene Onegin with Vancouver Opera. That was in the early ‘80s. He was an early role model.

When did you make your professional debut, in opera? In concert?

It was as Monsieur Triquet in Onegin with POV and Tim Vernon, in 1991. My concert debut was as the Shepherd David in Honegger’s Le Roi David. Also in Messiah with the Victoria Symphony under Glen Fast.

Monsieur Triquet! That’s interesting…  Usually this character tenor role is taken by much older singers. When did you have your proverbial ‘big break,’ and in what opera?

That would be Tamino in The Magic Flute (1994) at New York City Opera and in Glimmerglass.

I see you are still actively performing. Has your tenor voice changed much over the length of your career?

Not really. Maybe it’s gotten a little darker, but it can still move if I practice!

Your favourite operatic roles, then and now?

Tom Rakewell, Ferrando, Belmonte, Almaviva, Ottavio, Andres in Wozzeck. I’d like to do Wagner, but I’m not a Wagnerian.

Given that you’ve had a long career and worked with many conductors, stage directors, and fellow singers, who did you enjoy working with the most? Experiences that were special and memorable?

Greg Funfgeld (Bach Choir of Bethlehem, Pennsylvania), Bernard Labadie, Carlo Rizzi, with whom I sang Barber at Welsh National Opera. When I’m working with a great conductor, I’m mostly in awe, almost don’t know how to behave. Memorable experiences? Performances of Stravinsky’s Persephone with Isabella Rossellini and Gérard Depardieu, at Teatro San Carlo in Naples and in Epidaurus, Greece. Singing with Ben Heppner at the COC, in Pagliacci. Opera Atelier was a big part of my early career. We went on a tour to Europe.

I understand that you once deputized for the great Jonas Kaufmann. Can you tell us about it?

That was at the Théâtre du Capitole in Toulouse, in a performance of Ambroise Thomas’s Mignon in 2001, with Susan Graham as Mignon. Kaufmann was sick in one of the shows and Nicolas Joel (Capitole’s Artistic Director) brought me in because I knew the role. I sang from a proscenium box while Kaufmann mimed onstage. Later, I was given a contract to sing Almaviva in Barbiere… Interesting story! And I’d bet a little scary too! You transitioned to teaching at a relatively young age. What drew you to teaching instead of singing full-time?

Life is full of decisions. Catherine Robbin asked me to teach part time at York University in 2004, and it set the path. Also, my hip was giving out, and I had an operation in 2006. My wife [soprano Anne Grimm] was also a singer, and we had two little girls, age 4 and 2…we saw a life of travelling and had to choose for the future. UVic came up in 2005 and I was asked to apply by Alexandra Browning. A life changing decision, to move west, to be farther from ‘the action’ and Europe, but it was a good call for the family.

What qualities do you look for in a student?

Poetry, musical intelligence, fire, interest, naïve delight in everything, and the ability to focus—eventually.

How do you know if someone has the potential for a professional career? What’s the key to a successful career?

You’re lucky if you get a good student. Initially, if I hear a voice well placed with ping and ease of delivery, I get excited! If they then can tell a story on stage by being vulnerable, that’s amazing. Some are born to do it, but most have to work hard. Key to a successful career? I would say hard work, patience, humility, knowledge, living life and choosing to truly know people, so that you can get into the characters of your music. Also having one’s sights set high doesn’t hurt!

Looking back on your performing career, what are you most proud of?  What gives you the most satisfaction?

I’m grateful to be still performing. When all is said and done, I am most proud of my family. The greatest satisfaction at this point is seeing students thrive, and to know that my guidance might have had a little something to do with their journey.

If you were to do it all over again, what would you have done differently? Any roles you wished you had sung?

If I got to do it again, I’d probably just listen more to the people trying to help me and do what they said! As for roles, I would have liked to sing the Tenor in Der Rosenkavalier, just to be a part of such an extraordinary piece of culture. I also wouldn’t have minded coming to terms with Wagner when I was given the chance–David in Die Meistersinger would have let me down a different path.

What’s the best piece of advice you’ve been given when you were a student or young professional, advice that has served you well as an artist and a person?

As an artist – “Show up on time, know your music and be nice to your colleagues!”; “No one in art can advise or help you… no one” (Proust); “You have a diamond in your throat, please don’t abuse it” (Leopold Simoneau); “Make it human dear” (Selena James). As a person – “there’s a time to grow up and face the music.” This one took me awhile but I’m getting there!

What advice would you give to your students?

Count your lucky stars that you do what you do. Don’t squander your talents. Celebrate them every step of the way. Don’t practice until you think you have it right—get out there and practice by being onstage. Live! Resilience is key.

Sorry for a barrage of these lofty, serious-minded questions, but I want to ask — how would you like to be remembered?

“Be yourself… everyone else is taken.” (attributed to Wilde). I tell my students that really the best thing they have going for them is themselves. I told my New York agent as much when I first started with them, that if presenters wanted a tenor, they would probably ask for someone else. But if they wanted me, I was available. I’d be happy if I can be remembered as someone who wasn’t such a bad guy, and who sang a few things well. As a teacher, I’m most likely defined by the fact that I want my students to delve deep, and always fight for elegance of line and beauty of tone, to sing with their real voice, and to be authentic.

Robert Holliston will be presenting the ‘Ruby’ to Benjamin Butterfield on Nov. 4th in Toronto.