Edmonton Opera opened its three-show season on October 22 with a compelling production of Puccini’s Tosca. It will be the only traditional take on a canonic work in Artistic Director Joel Ivany’s first crack at designing an Edmonton Opera season. Productions of Cosi fan tutte and La bohème, staged in the first half of the year after he was appointed were programmed by Ivany’s predecessors.

Ivany is known for his innovative approach to presenting the standard repertoire, and in January he will be introducing Edmonton audiences to the brand he has cultivated as founder of Toronto’s Against the Grain Theatre, with his much-praised re-imagining of Gluck’s Orfeo ed Euridice, retitled Orphée+. Ivany has already presented his conception to audiences in Banff and Toronto. 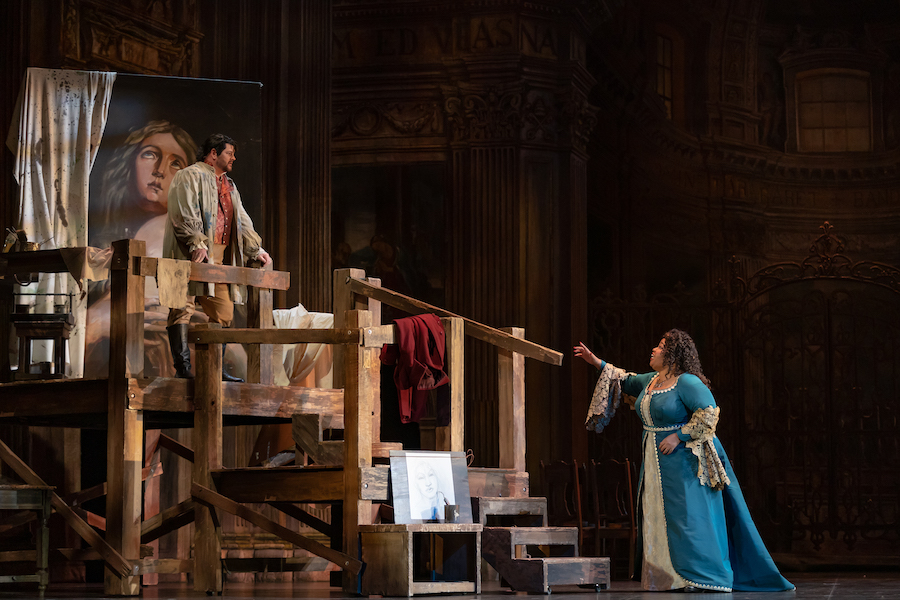 This Tosca, though, was solidly in the grand opera tradition, which Edmonton audiences have been accustomed to expect from its local company. And it featured every element of a powerfully staged performance.
The three principals playing Tosca, Cavaradossi and Scarpia were outstanding, but as impressive in conjuring the dark story of tested love and violence were the rented Seattle Opera set, designed by Ercole Sormani, and the lighting, designed in-house by Jason Hand. The backdrop of a cathedral interior for act one was especially realistic, and the lighting throughout evening, cast a chiaroscuro effect over the steadily oppressive action. In act two, as Scarpia primed himself to rape Tosca, Hand lit the villain so that as Tosca sang her poignant lament “Vissi d’arte”, Scarpia’s monstrously large shadow loomed menacingly on the wall behind her. Hand provided just enough light to direct the gaze to the singing characters while enveloping the rest of the stage in gloom.

American soprano Karen Slack in her Edmonton Opera debut as Tosca, tenor David Pomeroy as her lover Cavaradossi, and baritone Peter Barrett as the sadistic Scarpia were uniformly strong, both musically and dramatically. I’ve seldom seen an Edmonton Opera performance where every cast member has filled the large Jubilee Auditorium with such satisfying operatic artistry. Pomeroy demonstrated a talent for delivering power and lyricism by turns, with an ease and presence that belied the hard work involved. In act two, after he’d been tortured, his defiant cry of “Victory” on hearing that Rome had fallen to Napoleon was the kind of moment tenors live for, and he was in his element.

Slack presented a Tosca, before she becomes a tragic figure, as Cavaradossi’s insecure, girlish lover, coaxing him to include her dark eyes in his painting of the Madonna. Their opening scene is the only light moment in the otherwise bloody matter, and Slack drew laughs as she teasingly nudged her lover toward a concession. She is the heroine of act two, as she resists Scarpia’s devious effort to win her sexual consent. In her confrontation with Scarpia, in her moments of sheer panic, Slack sang the high C’s Puccini gave her to slash the air in desperation penetratingly, as sharp-edged a sound as the knife’s edge she later plunged into Scarpia in the climax of the act. 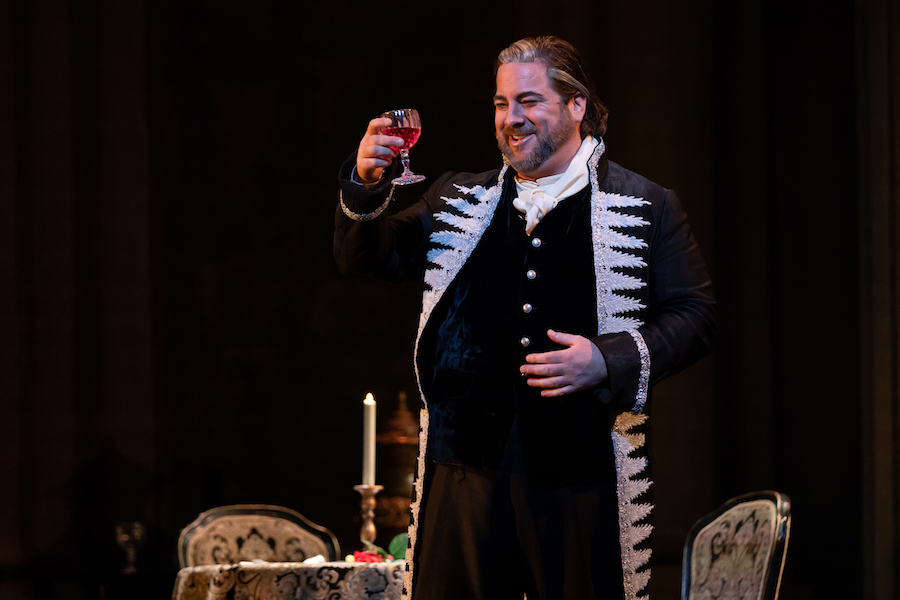 Barrett was a commanding Scarpia, at times matter of fact in the execution of his power, but in his second act manipulation and attempted sexual assault of Tosca, Barrett, both vocally and physically, displayed all the menace and determination of the heartless tyrant. He navigated the range of killer and seducer with eminent self-assurance. Scarpia’s henchman Spoletta (tenor Zack Rioux) played the order taker with a convincing machismo, singing his smaller tenor role as if he were a primary character whenever he appeared.

American director Alison Moritz, in her Canadian debut, managed the battle between Tosca and Scarpia with a fine blend of stillness and violent tension. Her direction throughout gave all the singers natural ways to convey their characters, to move dramatically or to simply bask in moments of vocal splendor.

The Edmonton Symphony, was once again led by Toronto Symphony resident conductor Simon Rivard, (he conducted bohème), and the group played the Puccini score as well as any seasoned pit orchestra whose job it was to perform opera all the time. The string playing, with the bells ringing in the background, in the introduction to act three, was exquisite, and the clarinet playing accompanying Cavaradossi’s beautiful “E lucevan le stelle” in act three, was pristine.

It will be interesting see how the Edmonton audience responds to a season in which they are treated to only one chestnut, performed as well as this Tosca was.