Gianni Schicchi at the COC: A felicitous if, ‘virtual’, re-start

It has been the longest silence in COC history. To opera-starved audience members like yours truly, it felt interminable. Due to the COVID-19 pandemic, the last time the COC put opera on their mainstage was with Barber of Seville and Hansel & Gretel, way back in February 2020. In the interim, there have been various smaller-scaled performances streamed on the company’s website. Those were enjoyable enough, but let’s face it, it’s just not the same.

Now ‘big opera’ is back, albeit tentatively, with only streaming access rather than in-person attendance. Sadly, we won’t get to see the inside of the Four Seasons Centre until February 2022, when the COC stages Madama Butterfly. For now, we’ll have to be content with Gianni Schicchi, the short, one-act Puccini comedic gem, in a scintillating staging designed to cheer up pandemic-weary opera fans. Recorded earlier this fall, it premiered on the COC’s website on October 30. The performance is available free and on demand until April 30, 2022.

Considering Schicchi is standard repertoire, it’s surprising the COC has only done it twice before. The first was in 1996, paired with Leoncavallo’s Pagliacci. It surfaced again in 2012, sharing the stage with Zemlinsky’s A Florentine Tragedy, when diva-turned-director Catherine Malfitano gave us her take on the work. Now it’s British theatre director Amy Lane’s turn, in her company debut. She gives it a rather mild time-shift to the 1950s, which works well, a few odd references to Buoso Donati’s favourite mule in the libretto notwithstanding. 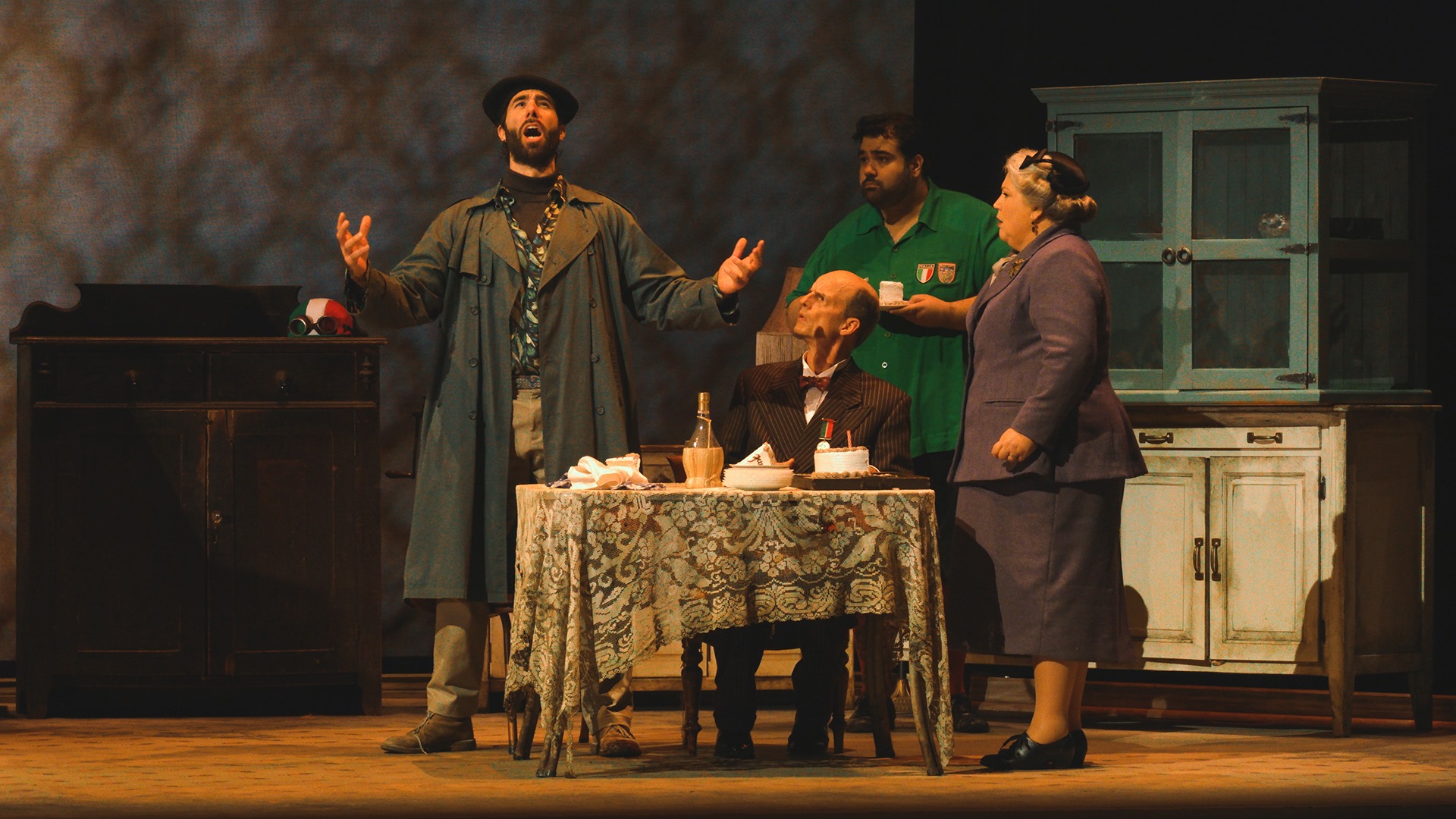 Streamed at 7:30 pm on Saturday, it was an enjoyable, if short, evening. Given the logistics of staging something as complex as an opera during COVID, it’s understandable why the COC opted for the short and sweet. Nothing too fancy in set design or Wagnerian in length, essentially a backdrop for projections plus various stage props. The slick and stylish 1950s costumes were created by designer Antony McDonald. Video projections effectively enhanced the story telling, culminating in a gorgeous grand vista of Florence at the end.

Schicchi is an ensemble piece with a huge cast of quirky characters, and the COC has brought together an excellent, nearly all-Canadian cast, made up of mostly current and former Ensemble members. The one major exception is English baritone Roland Wood in the title role. Last heard as Renato in the COC’s 2014 Un ballo in maschera, he returns to show he is equally adept at playing buffo. He sang Schicchi with attractive, warm tone, and wasn’t shy when it came to hamming it up, though thankfully he never crossed the line into vulgarity.

Each character in this opera is finely drawn, each with a moment to shine. Kudos to Amy Lane for her detailed staging, bringing out all the quirkiness in the personages. It’s a finely choreographed show, down to the last turn of the head and flick of a finger, always in sync with the music. The naysayers might argue that it’s a bit over-the-top, but hey, this is Puccini, a comedy, and verismo! If anything, it shows how well rehearsed the ensemble cast was.

Space does not allow me to single out all the excellent portrayals in the huge ensemble, except to say there are no weak links. At the top of my list is the Zita of mezzo Megan ‘Julia Child’ Latham, who sang well and chewed scenery like there’s no tomorrow. The lovers, Lauretta and Rinuccio, were well taken by Korean soprano Hera Hyesang Park and Canadian tenor Andrew Haji. They have the most lyrical moments in the opera of which they took full advantage. Park sang the show-stopping “O mio babbino caro” with dulcet tone, while Haji’s beautiful lyric tenor sounded terrific. I happened to have heard Park when she won second prize at the 2015 Montreal International Music Competition, and at the time I thought she was destined to go places. Look at her now!

The COC Orchestra was its excellent self, with no signs of rust from the long layoff. Italian conductor Jader Bignamini made a welcome return and led the forces in a lively and idiomatic reading. The only fly in the ointment? Occasionally, the big sound meant the lovers were covered by the orchestra in the climactic moments. This was particularly true for Park, who had to push her lovely lyric soprano, resulting in a more pronounced vibrato at times.

Other interesting characterizations that caught my eye included soprano Jamie Groote’s fashion plate La Ciesca, and the cameo appearance of veteran baritone Doug McNaughton as Spinelloccio. And my compliments to Larry Mannell in the silent role of Buoso Donati, for his extraordinary skill at playing dead, despite all the contortions he had to go through at the hands of the cast. A final surprise. Amy Lane decided to raise the dead by having Buoso Donati pop out of the bathtub at the very end of the opera – a directorial nod to join in the Hallowe’en fun, perhaps?

If COVID has got you down, be sure to watch this. It may just leave you with a smile on your face.