Opera Mariposa is one of the landmarks of the indie opera scene in Vancouver, and their 2019 mainstage production is Puccini’s slapstick one-acter, Gianni Schicchi. Due to the short 50 minute run time, the company paired the comedy with a number of different opera scenes in the first half. These included excerpts from The Marriage of Figaro, Così fan tutte, Rigoletto, and many more, all performed by members of the cast in various combinations.

From Gluck’s Orfeo ed Euridice, Lauren Solomon as Orpheus was very sincere, lovely, and vocally strong. Her longing for Euridice was heartfelt and poignant in “Che farò senza Euridice.”

Jacqueline Ko and Shanté van Horlick as Fiordiligi and Dorabella were well-balanced, sensitive, and funny in their rendition of “Ah! Guarda, sorella” from Mozart’s Così fan tutte.

But the absolute highlight of the evening was a scene from Verdi’s La traviata. Robin Hahn as Violetta, and Cameron Killick as Germont performed the Act II scene in which Germont asks Violetta to forsake Alfredo. Hahn’s grief and torment were gut-wrenching, watching her body break down and collapse under the weight of her despair. Vocally Hahn was sublime, with a beautiful resonant soprano full of colour that brought the audience to tears. As Germont, Killick was stoic and proud, but very sincere and driven in his need to make former courtesan Violetta disappear from his son’s life. He seemed very touched by Violetta’s pleas, but ultimately knew what was best for his family and persisted in breaking her heart. Vocally Killick was stunning, an incredibly resonant, powerful voice that rang to the back of the hall, rich and sonorous throughout. The reaction from the audience was overwhelming. 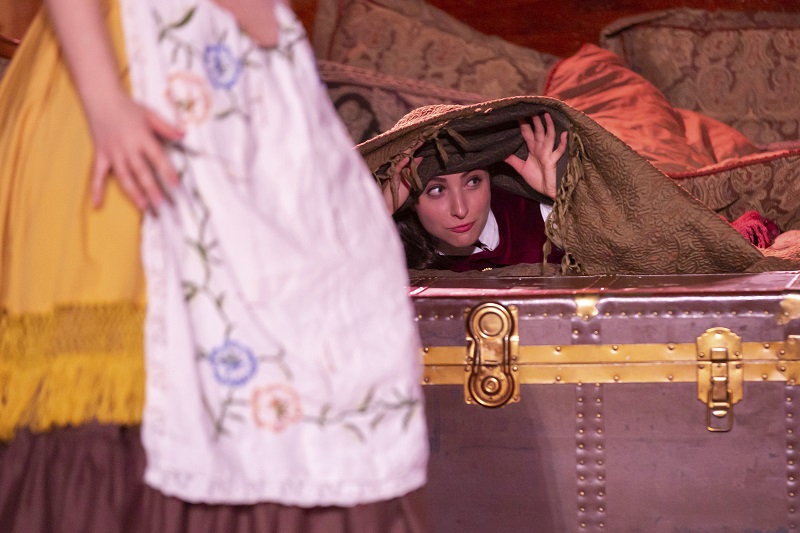 Shanté van Horlick in an excerpt from The Marriage of Figaro at Opera Mariposa—Photo: Diamond’s Edge Photography

In the second half, the scene is set for Gianni Schicchi, with an enormous four-poster bed centre stage, the deceased Buoso’s belongings scattered everywhere. Jeanine Fynn’s stage direction was full of campy ridiculousness and so many moments of comedy gold: from a dance break with twerking, to Nella (Libby Donald) crying like a barking seal, to La Ciesca (Jacqueline Ko) being garroted with her own hair and bawling on the floor, to Betto di Signa (Cameron Killick) stealing most of Buoso’s possessions and looking at 18th-century dirty pictures…to a giant, overfed bird. The physical comedy is brilliant from start to finish.

Lauren Solomon as Zita was huffy and mean, her dark mezzo adding great colour to the ensembles. And in a small but hilarious role, Nancy Hasiuk-Lay as Gherardino was the perfect 12-year-old boy, from the badly-buttoned vest, to trying to steal Buoso’s desk (badly), Hasiuk-Lay was adorable and endearing. 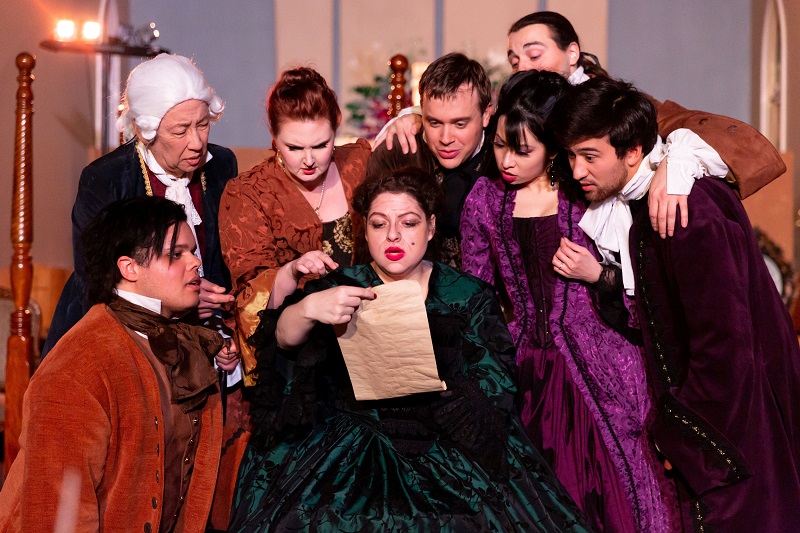 Sevan Kochkarian as Lauretta and Jonathan Gagné as Rinuccio were absolutely stellar. With clear, brilliant voices, the pair were incredibly well-matched, and their duets were a highlight of the show. Rather than playing Lauretta as the dumb soprano who just blissfully goes along with everything, Kochkarian played her with sensitivity and nuance, and her desire for Rinuccio felt very real. Likewise, Gagné as Rinuccio was subtle, and the contrast between the pair and the ridiculous, greedy family made them stand out well.

In the title role, Richard Petroski came into his own in “Addio Firenze,” taunting and threatening the family with having their hands cut off. His baritone is light and agile, and his characterization is funny and sympathetic as he manipulates the greedy family, taking great pleasure in mocking them.