Review: Canadian Opera Company’s Nightingale “Parable on the supremacy of nature over artifice? Not so fast.”

Canadian Opera Company’s nine-year-old production of Stravinsky’s shorts, The Nightingale and Other Short Fables directed by Robert Lepage has aged well—as family entertainment. It sells well, it brings children and rookies to the opera house, and this time around it put to work much of the COC Ensemble Studio. 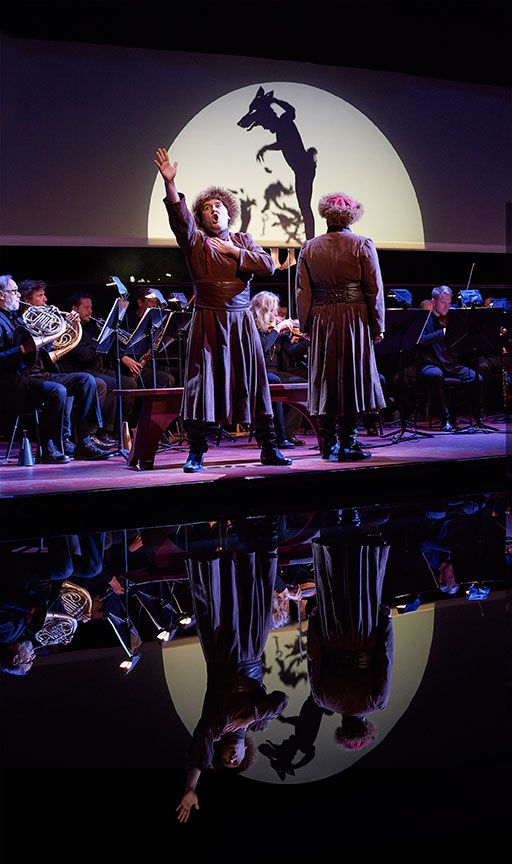 For those of us who saw its 2009 premiere, the excitement has subsided. The production stitches together a selection of Stravinsky songs and instrumental pieces along with the short opera, The Nightingale, into a puppetry-themed revue. While children may rejoice at the shadow puppetry illustrations during Pribaoutki and The Fox, adults might wonder why this modernist composer is being given the Russian folklore treatment. In the program’s first half, all the singers wear peasant clothes, and while this makes sense for Four Russian Peasant Songs (women of the COC Chorus, underpowered on opening night), it does not for Two Poems of Konstantin Balmont (Danika Lorèn, bright-voiced and exquisite in Russian language) or Three Pieces for Solo Clarinet (the very engaging Juan Olivares).

The Nightingale itself is a strange bird, and Stravinsky thought so too. He composed Acts II and III after he had completed The Rite of Spring and Petrushka, thanks to a commission he couldn’t refuse, and Act I does remain stylistically apart. The opening song of the Fisherman and some of its surrounding woodwinds could have come from Russian 19th-century opera, whereas the rest of the work fits in better with the invention, sharp edges and crafted-ness of Stravinsky’s mature oeuvre.

The story is, fittingly, bizarre. In the libretto by Stepan Mitussov based on Hans Christian Andersen, the courtiers of the Chinese Emperor go out into the nature to hear the Nightingale. A cow and a frog confuse them at first, as they’ve never heard sounds from nature, but the Nightingale is finally found and they invite it to court. The Emperor is moved when the bird sings at his quarters, yet when Japanese visitors interrupt the jam with their gift, a mechanical nightingale, he is also impressed. The real Nightingale leaves unnoticed and is subsequently banned for disobedience but returns in Act III to negotiate the Emperor’s release from death throes. Morning dawns, the Emperor is alive and well, Death chased away by song. 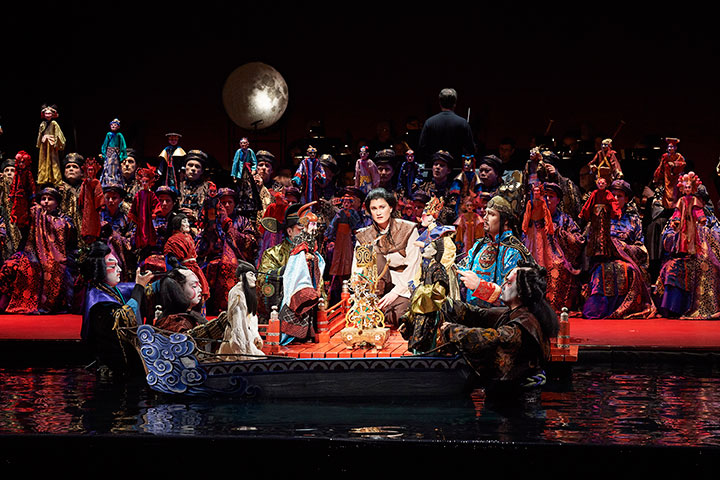 A scene from Canadian Opera Company’s The Nightingale and Other Short Fables. Photo: Michael Cooper

Parable on the supremacy of nature over artifice? Not so fast. The music Stravinsky gives to the Nightingale is a whole lot of beautiful, but also cool and detached, with coloratura atop text that describes wet foliage in the night. Yet, to the stilted and ceremonious figures of the imperial court—and to Death—it sounds extraordinary, perhaps because it is so free. Free from emoting too, just as operatic expression will attempt to free itself from voicing and eliciting straightforward emotion for much of the rest of the 20th century to come, excepting Puccini. “For me, music is reality… and like Baudelaire, but unlike Messiaen, J’aime mieux une boîte à musique qu’un rossignol,” Stravinsky said in his Dialogues with writer Robert Craft.

Robert Lepage and his collaborators in Ex machina correctly intuit the artificial, laboured-over and crafted nature of everything in this piece, giving every character a puppet double to speak through—except, again, the Nightingale, whose mechanical double flies around as it pleases (on a long stick supported by a handler disguised in black). This is a perfect role for Jane Archibald who, when not holding the bird, roams freely among the characters and supplies self-contained coloratura utterances. Other principals are all in the pool of water occupying the orchestra pit, while the Orchestra is on stage, behind the action. The original Diaghilev production designed by Alexandre Benois also played with upstairs-downstairs, and placed the Nightingale and the Fisherman inside the orchestra pit. 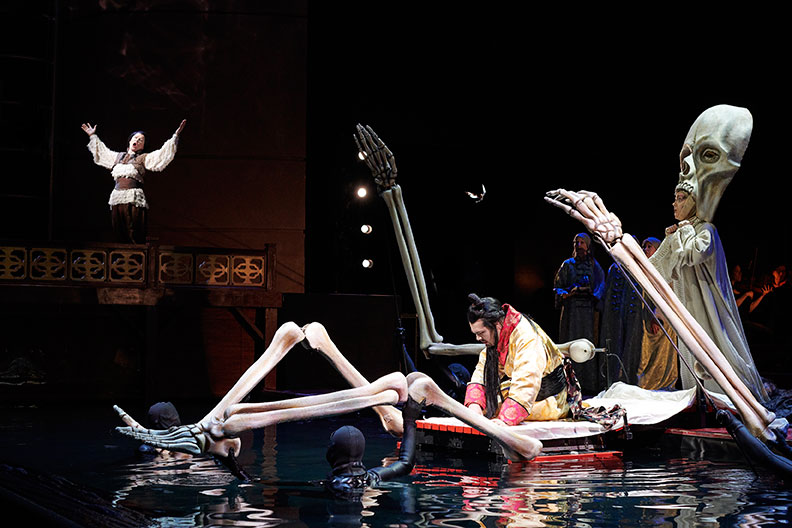 While he could barely be heard in Part 1 as one of the quartet in The Fox, Oleg Tsibulko got back the volume by the time he returned as the Emperor in Part 2. Lauren Eberwein as the Cook and Lindsay Ammann as Death managed to leave their marks in a crowd of small roles as they had a bit more of substance to work with. Owen McCausland’s secure, full tenor was very distinct in Part 1 and returned in Part 2 as the Fisherman. He was comfortable in Russian, and vocally even throughout the range. Occasionally, a bit more inflection and nuance was called for: there’s sufficient force there, but also a certain over-reliance on ‘oomph’ when modulation is more what’s needed. It will be interesting to watch his voice develop as it likely grows more dramatic in the years to come.

The crown achievement of the evening is Stravinsky’s music itself, incapable of dullness if honoured properly, and the COC Orchestra conducted by Johannes Debus honoured its crispness and animation. From Ragtime, which served as the overture (and which could have been written yesterday, by John Adams), to the last bars depicting the rising sun in The Nightingale, the lucid and nimble Orchestra kept the evening, potentially weighed down by dolls, gallons of water and crowds of courtiers, moving forward with swift and steady motion.