A changed world makes for a changed Don Giovanni. Produced by an all female team, UofT Opera’s production of Mozart’s Don Giovanni (seen Nov. 23) struck new chords in how to deal with the leading man’s appalling treatment of women. Flanked by a chorus of silent female observers, the characters in Marilyn Gronsdal’s production were judged, protected, given sympathy and scorned. ‘Actions have consequences’ suddenly adopted a new, entirely contemporary meaning.

Gronsdal’s sets the action in the 1930s (based on an assessment of the costumes, designed by Lisa Magill). The time and place are not terribly important, as the set is skillfully versatile to look at, but never very specific in terms of a defined location. Gronsdal immediately creates a picture as the orchestra travels through the famous overture with pleasurable intensity; the strings playing with impressive dexterity. Conducted by Uri Mayer, the instrumentalists are wonderfully skilled, providing a secure foundation for the young singers. 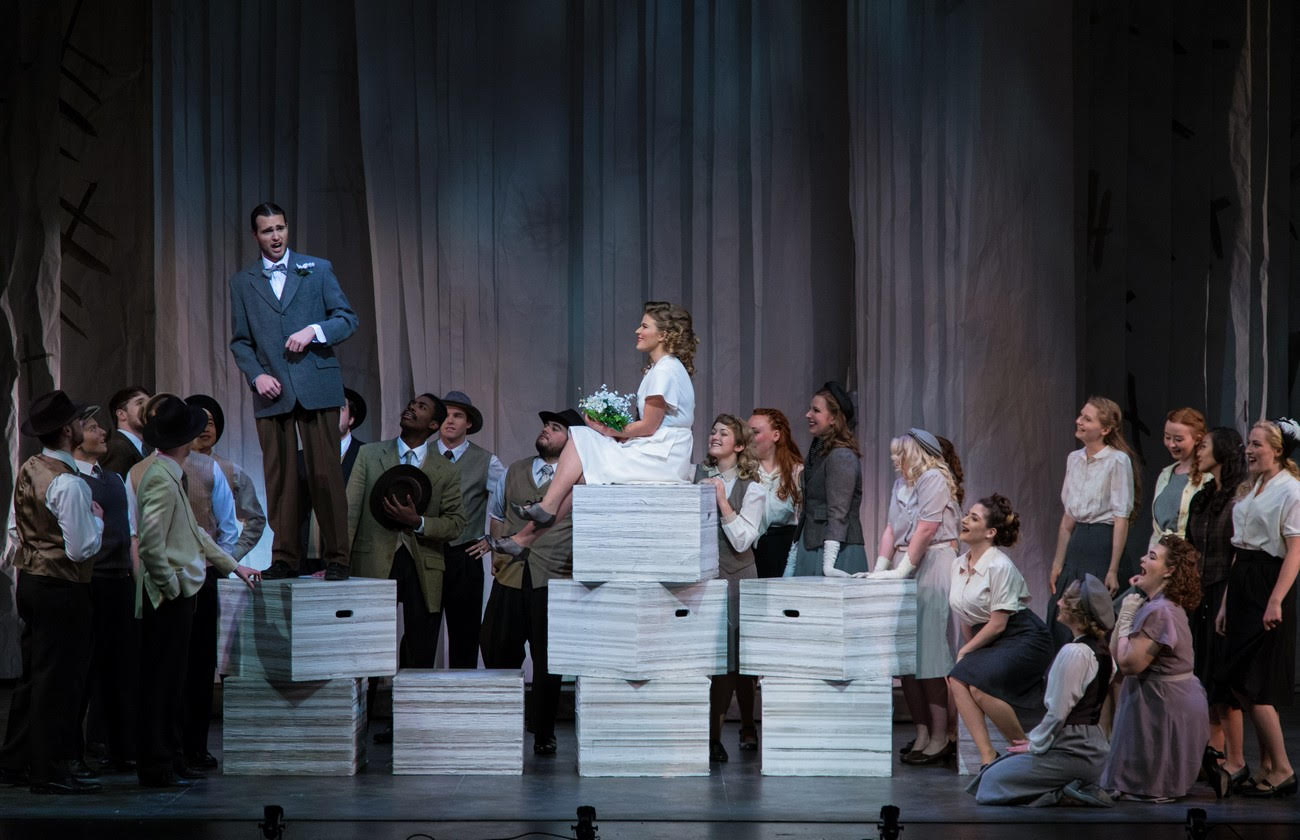 Adorned with hanging strips of noisy, faded white paper bearing tally marks (four vertical lines and one horizontal line striking through to make five), the design symbolizes the women that have been harassed, assaulted and disrespected by Don Giovanni. Designed by Melanie McNeill, the set markings also resemble scars, perhaps symbolizing the scars tarnishing Don Giovanni and haunting his many victims.

Not all of the women stay silent. As Giovanni’s wife, Donna Elvira (mezzo-soprano Jamie Groote) spends the majority of the piece defending the assertion that her husband is an awful man. In the end, she gives into her heart, staying on stage until curtain as she assumes the role of his final victim. Groote’s tone possesses a captivating finesse over which she loses a bit of control in her final aria, “Mi tradi quell’alma ingrata”, but overall delivers a very fine performance.

As Donna Anna, soprano Alyssa Durnie sings with a superb, released ring to her tone that slices through the air. Surrounded by the chorus of silent women, she practically burns up with intense vocalism leading into “Or sai chi l’onore”. In this instance the silent chorus of women comforts the ailing Donna Anna, providing empathetic support. 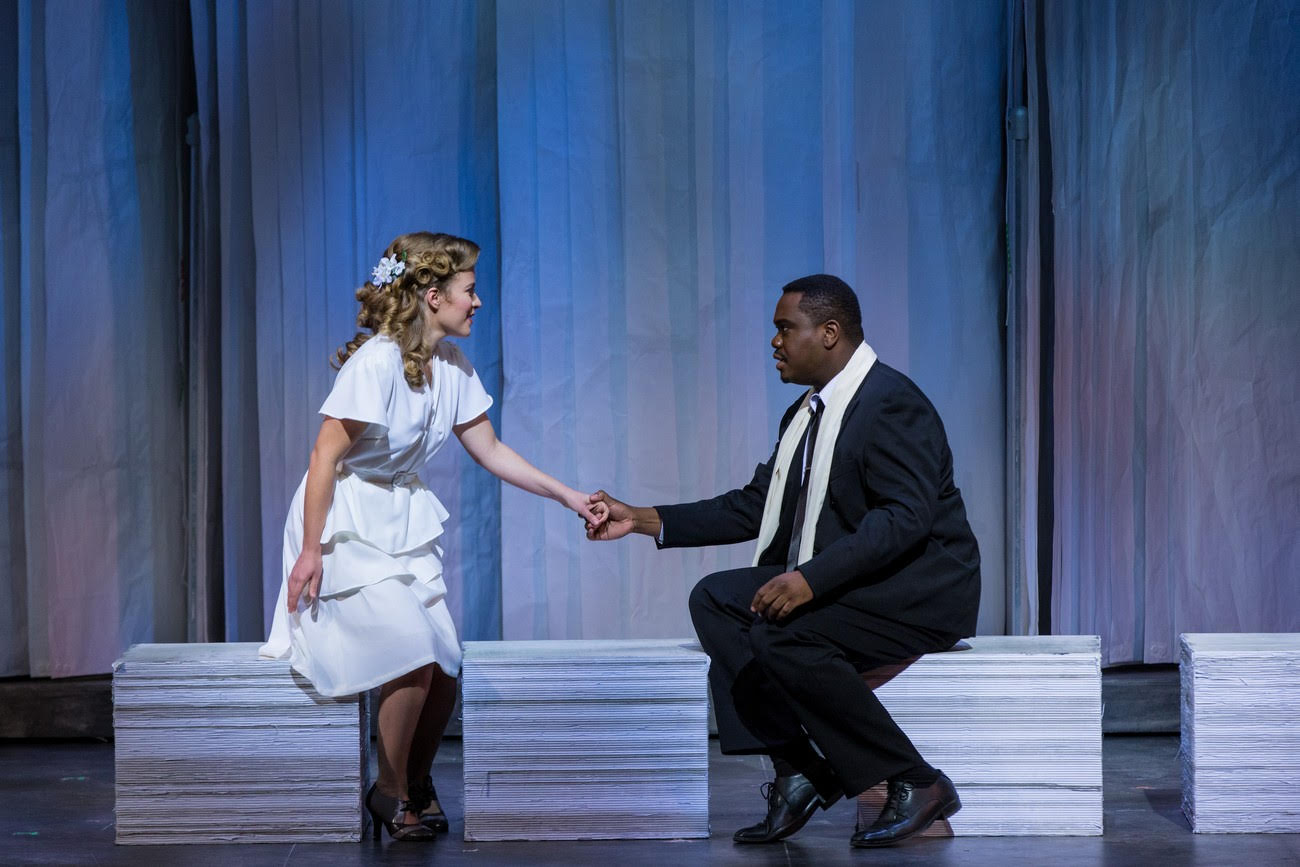 Zerlina (mezzo-soprano Georgia Burashko) on the other hand, is shunned by the women. During “Batti, batti, o bel Masetto”, the women are closed off, even turning away from her at one point. Burashko sings circles around the aria with heartfelt delivery, her luminous voice matching her radiant beauty. By the end of the opera, partly thanks to guidance from Donna Elvira, Zerlina finds her voice, standing up for herself.

Although Don Giovanni is known for his poor treatment of women, he isn’t any kinder to the men in his life. Leporello (Brenden Friesen) remains a faithful servant, but is constantly abused and taken advantage of by his master. Friesen is an absolute joy to watch on stage. The moment he opens his mouth, the bar is set for the production’s level of professionalism. This rumbling bass-baritone sings with exceptional diction and an enormous comedic presence, in part due to his incredible interpretation of the text. Friesen’s brisk-tempo’d “Madamina, il catalogo è questo” demonstrated the full colours of his voice.

Don Ottavio (Matthew Cairns) is the opera’s perfect gentleman. Cairns, a sweet-voiced towering tenor, was the perfect fit for the role, giving a very focused performance and navigating the difficult coloratura sections in “Il mio tesoro” with ease and clarity.

As Don Giovanni, Andrew Adridge could have used more clarity, especially where diction is concerned. Adridge sings with a light, pressed tone resulting in a “Deh vieni alla finestra” that lacked depth. He vocalizes with incredible emotional intensity, but sloppy diction turned most of his musical material to operatic mush. As an interesting contrast to the stereotypical brawny, masculine portrayal, Adridge’s Don Giovanni is more psychological, using manners and charisma as his weapon.

The themes in this opera must be approached much more carefully than they would have even a few months ago. We are now living in the world of Harvey Weinsteins, Charlie Roses and Kevin Spaceys; Don Giovanni shouldn’t be handled any differently. Gronsdal sends this message in the finale of Don Giovanni. When the Commendatore (expertly sung by recent COC Ensemble Studio competition awardee Joel Allison) arrives for dinner, he is not physically present on stage; but the chorus of women are. The Commendatore in this production gives these women a voice; the entire chorus of women being the ones to bring Don Giovanni to judgement for his actions.