Now in its 21st season, Opera York continues its tradition of bringing opera to the York Region, which is roughly the area immediately north of Toronto and Highway 7. Two operas are presented each season. I’ve heard many fine young voices in the dozen or so years I’ve been attending, usually in warhorses such as Carmen and Tosca, plus the occasional rarity like the Israeli opera, And The Rat Laughed. While modest in scale, one can always count on plenty of enthusiasm and youthful spirit.

OY’s spring production this season was that old standard, The Marriage of Figaro, as usual sung in Italian with English surtitles. The venue the last ten years has been the excellent Richmond Hill Centre for the Performing Arts. This intimate 650-seat theatre was designed by Jack Diamond, whose firm was also behind the much bigger and flashier Four Seasons Centre for the Performing Arts, home of the Canadian Opera Company. RHPA is blessed with excellent acoustics and terrific sightlines, ideal for young voices. The orchestra pit is very small, so don’t expect Wagner or Strauss, but for Mozart it’s an ideal house. 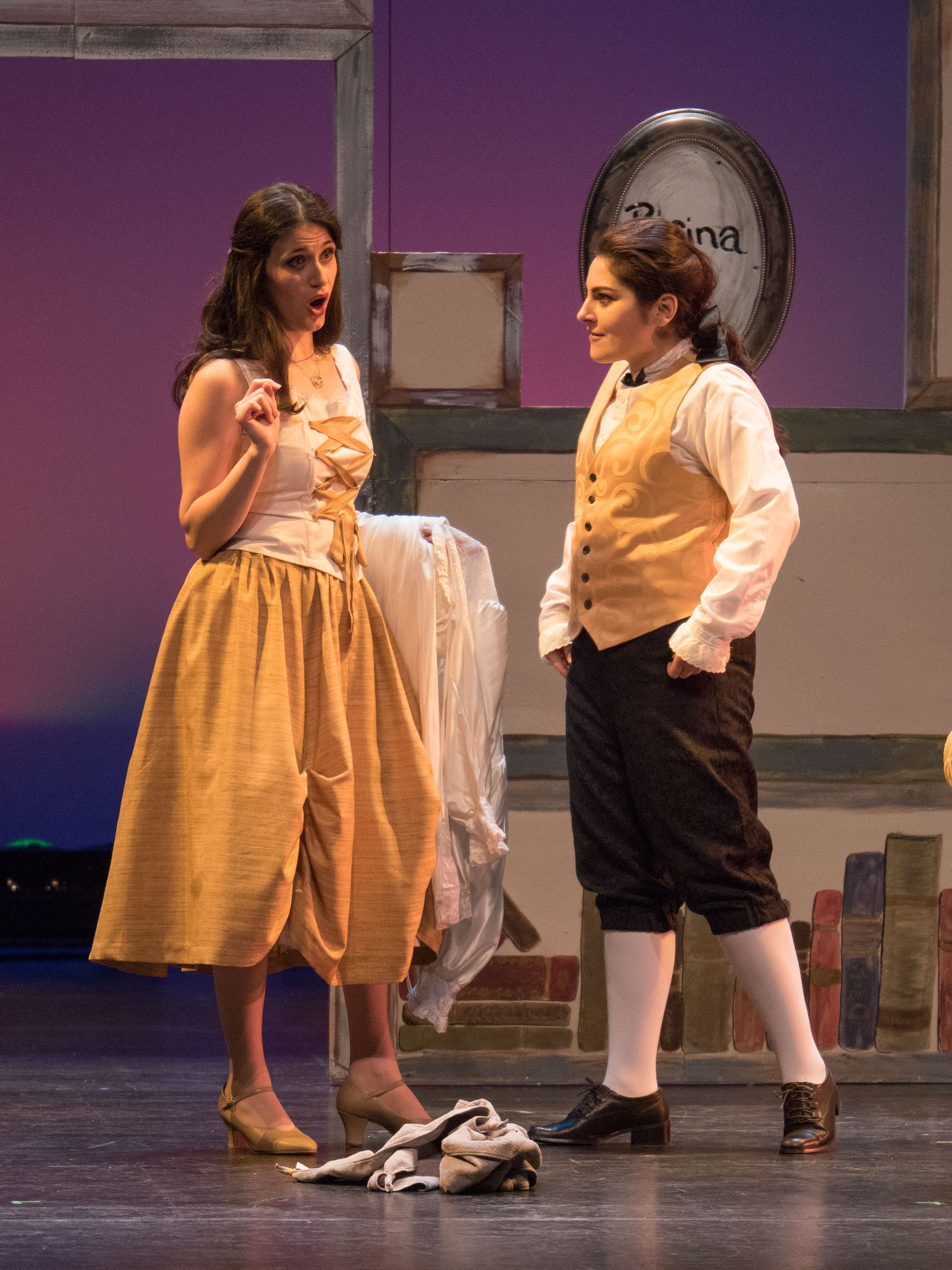 Opera within a movie concept

For this show, Opera York assembled a strong cast of young singers and experienced veterans, under the stage direction of Renee Salewski. I’ve seen her work before, and I must say I generally like her approach to updating standard repertoire pieces. Her vision is invariably fresh, creative, a little surprising, but not over-the-top or willful. From the first note on, it’s clear that a filming of the opera is in progress, with the cast and crew sometimes appearing on stage at the same time. A supernumerary is holding a boom pole through the entire three-hour duration of the opera – kudos to that gentleman’s stamina!

This bit of directorial whimsy gives the piece an interesting look, arguably a little gimmicky, but at the same time it’s fresh and true to the comedic spirit of Nozze. If one had to nitpick, it’s the (very occasional) noises made by the newly created, supposedly silent character of the stage manager. Any extra, non-musical sounds are an unnecessary distraction—typically any stage business that’s not part of the original is almost always silent, or should be!  But that’s a minor quibble since the added material here is in keeping with the spirit of the opera and the nature of the characters. For example, the Contessa sings “Porgi amor” after having received a massage—sure why not, she’s stressed out! It’s clever, compared to some of the much more outrageous takes I’ve seen!

The costumes (uncredited in the program, but likely rented from Malabar?) are traditional and generally pleasing to the eye, if stylistically rather disparate. Given it’s a regional company on a limited budget, the sets are mostly isolated pieces of furniture, plus a few painted drops that come down from the stage flies. Nozze is a long opera—if done uncut it lasts about 3 ½ hours. To their credit, the only cuts seemed to be the standard ones taken by most companies, such as Marcellina’s aria. For some reason, there were no surtitles provided for her recitativo which is almost never cut—a minor oversight. I timed the whole thing—this March 4 matinée began at 2 p.m. and ended at 5:10 p.m., including a 22-minute intermission, thanks to Maestro Geoffrey Butler’s brisk tempos. 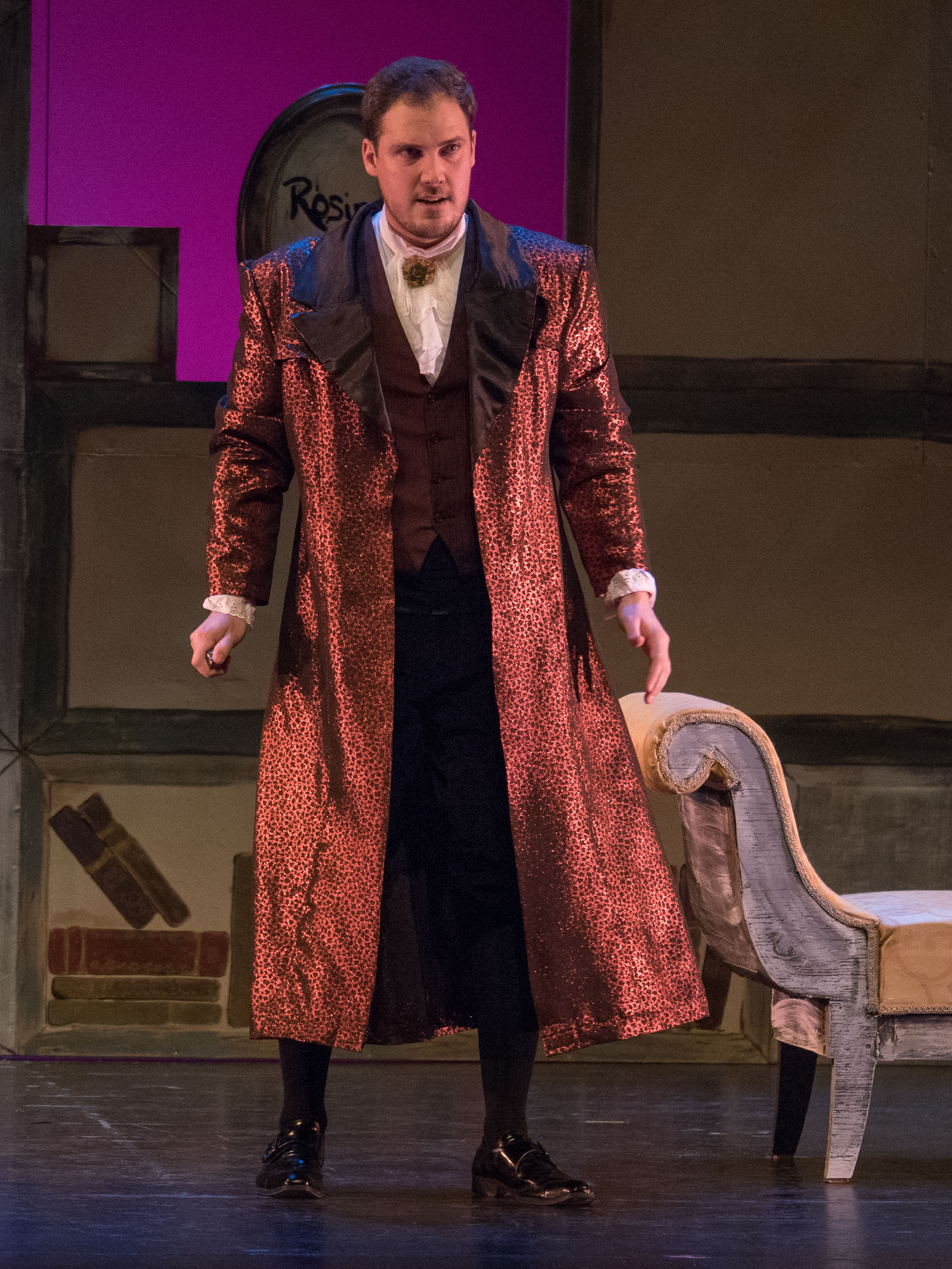 The cast was uniformly very good, led by the ingratiating baritone of Anthony Cleverton in the title role. Usually Figaro is taken by a bass-baritone—Cleverton has a solid enough lower register but also the freedom on top to do justice to the role’s few higher, forte tones. He was well partnered by the sparkling Susanna of Elizabeth Polese, who acted well and sang a lovely “Deh vieni, non tardar.” As the upstairs couple, baritone Diego Catala was a standout, combining a warm and attractive baritone with a sexy swagger ideal as the Count. Perhaps he could have projected a bit more in his challenging aria, “Hai gia vinta la causa”.

The Contessa was taken by soprano Annie Ramos, a fine Pamina for OY a few seasons back. A sympathetic Contessa, she sang with soft, lyric tone, with lovely pianissimi in “Porgi amor” and “Dove sono.” Usually one expects the Contessa’s timbre to be darker and more powerful than Susanna’s, but not in this case. Nevertheless, her voice blended beautifully with Polese’s in the Letter Duet.

As Cherubino, Turkish-Canadian mezzo Beste Kalender sang with gleaming tone in her two arias and acted up a storm. Hers is a voice to watch. The two veterans in the cast, Douglas Tranquada (Bartolo/Antonio) and Ramona Carmelly (Marcellina) couldn’t have been better cast, bringing their years of experience to their character roles. Only two voices were new to me – tenor Colin Frotten was a marvelous Don Curzio, complete with the trademark stutter. Light lyric soprano Carla-Grace Colaguori was a slightly fragile-sounding Barbarina. The chamber orchestra played beautifully under conductor Butler. Kudos to him for a well paced and totally idiomatic reading of the delicious score. A wonderful way to spend 3+ hours on a Sunday afternoon.