Toronto Operetta Theatre’s (TOT) The Gypsy Baron by Johann Strauss II (seen Dec. 28th) is about as silly as one might expect from a Viennese operetta of the period. It’s a tale of righted wrongs, tangled love affairs, heroism, hidden treasure and pigs. Also, hot gypsies, which are, as Edmund Blackadder pointed out, indispensable.

Guillermo Silva-Martin’s production is standard TOT fare. It’s all very straightforward and essentially traditional in look and feel. The chorus mostly acts as a chorus line with a lot of unison choreography. The principals ‘park and bark’ most of the time with the addition of grand operatic gestures.

So it really all turns on how good the singing and acting is and that ranged from extremely good to not so much. Things got off to a rough start with the chorus singing from the back of the theatre. Was this being sung in English? I couldn’t tell and frankly that was the problem with the chorus all evening. 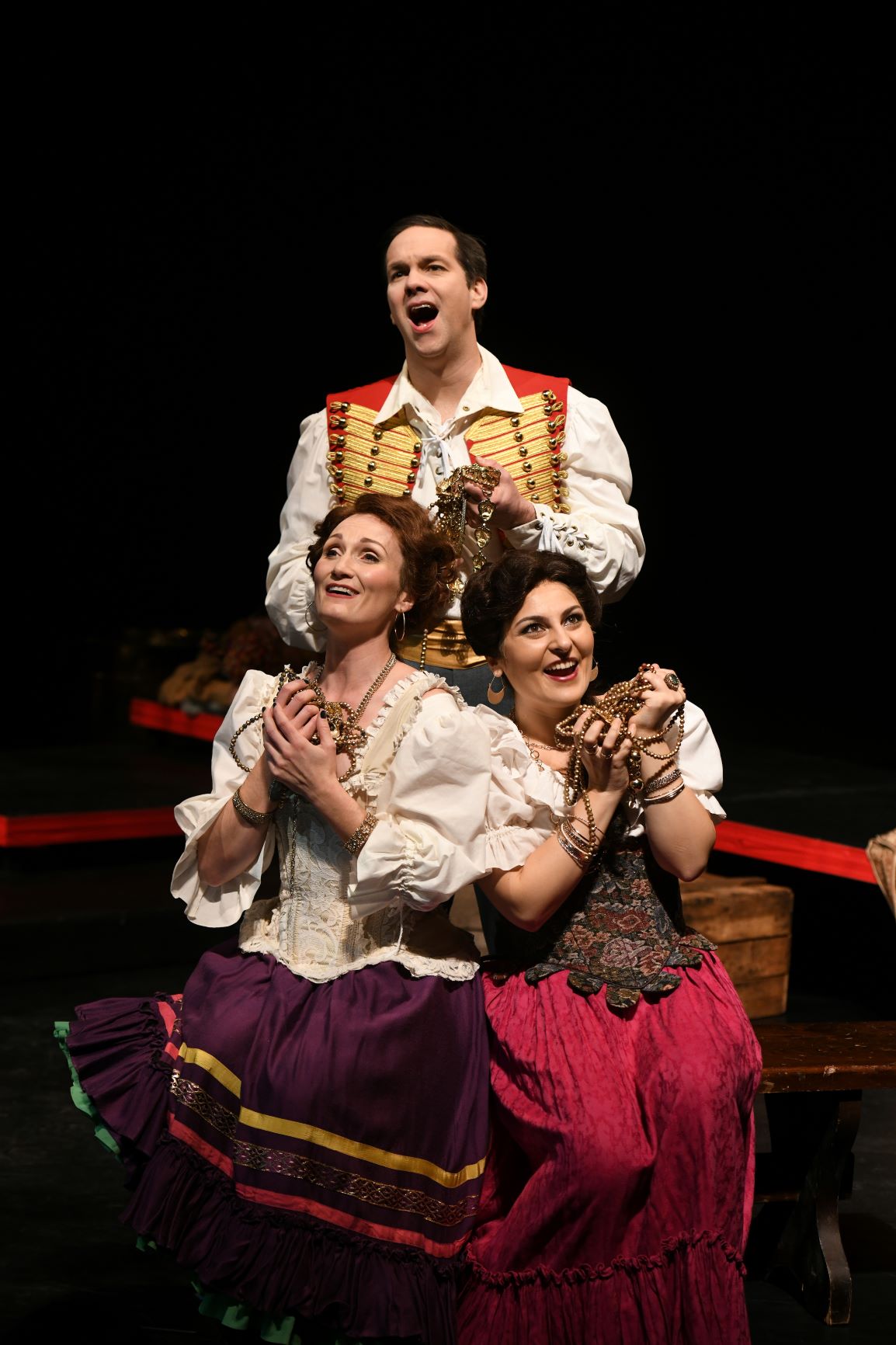 Things did improve. The central trio of tenor Michael Barrett, as the returning ‘master’ Barinkay; mezzo-soprano Beste Kalender, as the chief of his loyal gypsies Czipra, and soprano Meghan Lindsay, as the gypsy girl Saffi who turns out to be a princess, all sang strongly and made the most of their characters. Barrett was his usual kinetic self and showed impressive high notes. Kalender managed to be ‘exotic’ without descending into caricature and her smokey tones seemed just right. Lindsay was an interesting choice. As the principal love interest in an operetta one might expect a soubrette type but I thought Lindsay’s richer tones worked rather well.

The supporting cast was pretty decent too. Joshua Clemenger was appropriately bumptious as the pig farmer Zsupan complete with piglet. Austin Larusson as Carnero was equally bumptious albeit in a more aristocratic manner. The ‘missing’ soubrette was provided by Daniela Agostino as Arsena, Zsupan’s daughter. She managed some very decent coloratura but at times seemed a little insecure.  First night nerves perhaps. Diction though remained a problem and I was straining to catch the words more often than one ought to need to. Given this, the appearance of Cian Horrobin as Count Homonay was something of a relief. At last someone who not only spoke, but sang, in perfectly clear English and with some dignity. 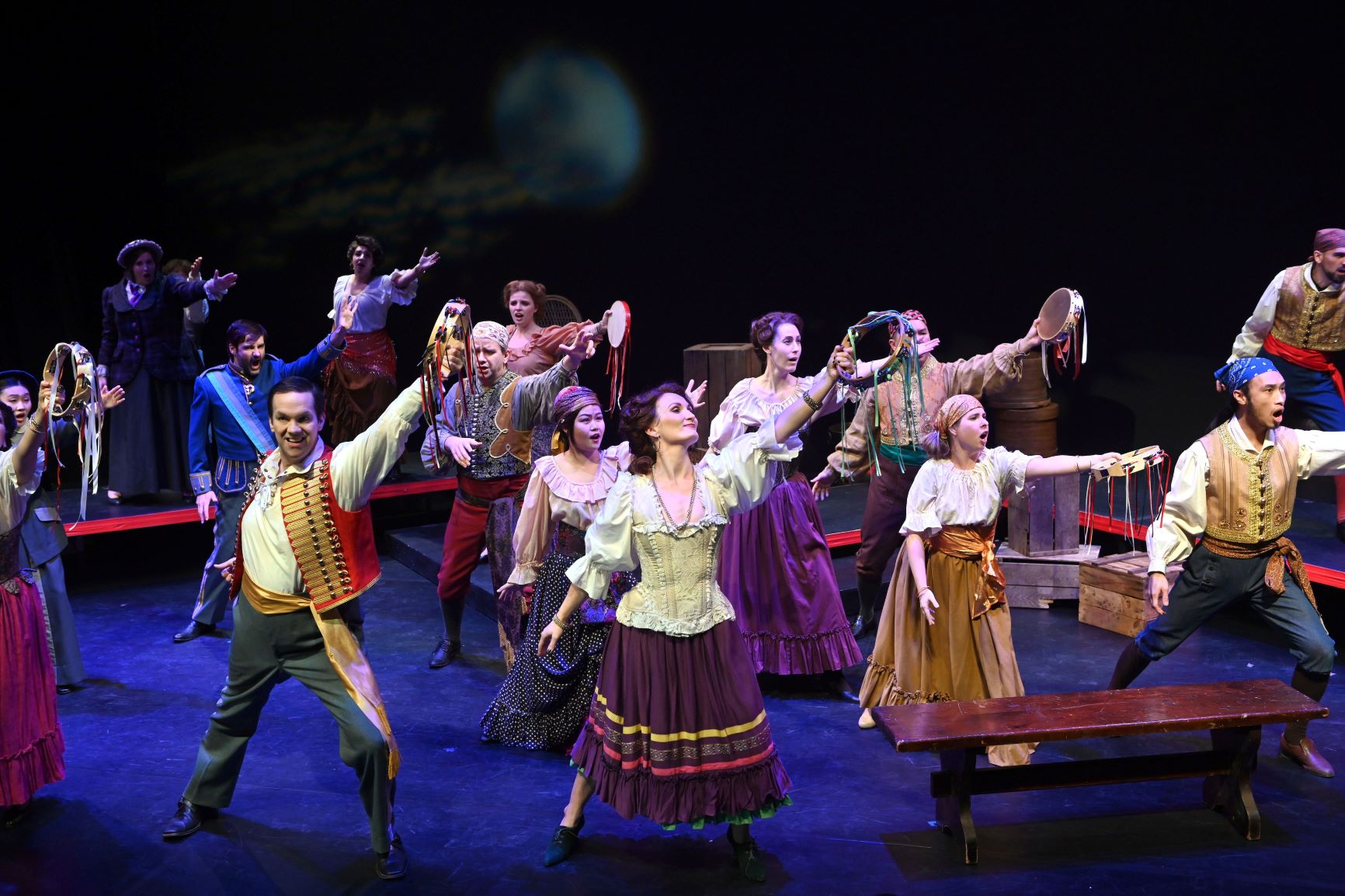 Accompaniment was, as usual with TOT, provided by a twelve-piece chamber ensemble. It’s the right scale for the theatre and I particularly noticed some excellent work by Philip Séguin on trumpet, which is part of what makes this approach much more satisfying than just piano. Derek Bate conducted perfectly efficiently.

So there you have it. The Gypsy Baron is a classic traditional TOT operetta production. There are Strauss tunes (including what appears to be his only ‘Hungarian’ one). There’s some good singing from the principals and, of course, hot gypsies. One might wish for either better diction or surtitles but it’s not like the plot is so involved that one loses it. TOT fans will feel they got their fix.