At the helm are Program Director Leslie Dala, Principal Coach Kinza Tyrrell and Coach Tina Chang, with the guidance of Vancouver Opera Music Director Jonathan Darlington. The goal of the program is to mentor and train emerging singers, pianists and stage directors through coaching, master classes, and performances. 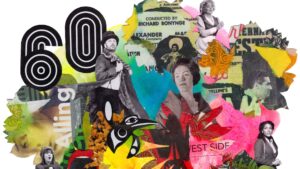 VO was forced to postpone their 60th anniversary season due to COVID-19. Source: Vancouver Opera

Among the participants are Toronto soprano Jonelle Sills, recently named one of CBC Music’s classical “30 under 30” performers for 2020, and Vancouver-based pianist Amy Seulky Lee. Lee made her debut with the Vancouver Metropolitan Orchestra in 2010 and has performed in concerts across Canada, United States, South Korea, and Italy. 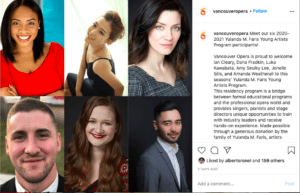 VO launched the program in 2012, and although the season ahead may “look a little different,” according to the press release, it will “still provide high calibre training and mentorship as well as unique opportunities for performance experience,” said Tom Wright, Vancouver Opera General Director.

Wright said he looks forward to showcasing the artists’ work at the end of the season. We’re waiting on the edge of our seats (at home) for the details to be announced!