From Pocketbook to Playbill: Paris Opera and Alexander Neef

Following weeks of rumours, Alexander Neef, the current General Director of the Canadian Opera Company was formally announced as the new Director of the Opéra National de Paris in late July. He starts in autumn 2021, succeeding current director Stéphane Lissner, who entered the position in 2014.

“Excited and daunted,” he says when asked to describe his feelings on the appointment. Neef worked as casting director at Paris Opera from 2004 to 2008, under his mentor, Gerard Mortier, with whom he’d already worked at the Salzburg Festival, the Ruhrtriennale, and New York City Opera. Last year Neef was named Artistic Director of the Santa Fe Festival; the future of his staying in that position is still a question mark. “I don’t think that I can maintain the level of involvement [at Santa Fe] because Paris is an 11-month season,” he says, “so it’s not quite clear yet.” When asked about potential areas of focus once he begins his Paris appointment, Neef says he hopes to highlight the work of French composers. He told the New York Times recently that “(i)t’s about identity, to really look at the French repertoire, not in an encyclopedic way, but showing the right pieces and the forgotten pieces, to keep that part of the heritage alive.” With Europe currently grappling with rising nationalism and political tensions, it’s an idea that is fascinating, if curious.

“Context is important,” he explains. “What we have to do with historic pieces—and new ones too—is put them into the context of the art form over the last 400 years and reevaluate their importance, and their meaning to the audience, which is something that changes.”

Another change Neef will have to face are levels of government funding for European houses. Arts budgets are subsidized to varying degrees across Europe, but the financial crisis of 2008 left the landscape for arts funding in an especially precarious state. La Scala Milan came under fire earlier this year for accepting €3 million in investment funding from Saudi Arabia. The company’s outgoing Artistic Director Alexander Pereira, who brokered the deal, has brought numerous needed sponsors and partnerships to the house since his appointment in 2014. The funds were to be part of a proposed five-year partnership deal with Saudi Arabia’s culture ministry, ultimately worth €15 million, and would have given a seat on La Scala’s Board to its Culture Minister, Badr bin Abdullah. The funds were subsequently returned in light of concerns over the house tying itself to a country with a dismal human rights record, but La Scala still needs to find and secure solid (and substantial) long-term funding. This debacle highlights the tough position in which many European houses find themselves.

Opéra de Paris relies on various fundraising activities and sponsors. In 2010, it received just over 40% of its annual operating budget (roughly €200 million, or close to CDN$300 million) in public funding. It currently relies on funding from both corporate (BNP Paribas, Crédit Agricole, and Natixis, among others) and private entities. The Association pour le Rayonnement de l’Opéra de Paris, or Friends of the Paris Opera (AROP), started in 1980, is a philanthropic arm of the Opéra de Paris made up of 4700 individuals and 180 companies. AROP membership provides privileged access to the various cultural activities offered by the organization, including meetings with artists, attendance at rehearsals, gala events, and trips abroad.

Since its founding, the organization has raised more than €55 million (almost $83 million). The organization receives assistance from the American Friends of the Paris Opera & Ballet (AFPOB), which raises between $500,000 to $1.2 million (US) annually. Acclaimed director Robert Wilson, whose production of Turandot opens the COC season in September, is a member of the board. Other fundraising initiatives include themed donor clubs (including Cercle Berlioz, specifically for lovers of French music), crowdfunding, and a seat-naming initiative (which netted the organization a tidy €650,000). “Initially, philanthropy was used as a stopgap solution,” Jean-Yves Kaced told the New York Times last year. Kaced is the Director of Development for the Opéra de Paris, and is also the director of AROP. “We would ask patrons to contribute because there was a funding shortage somewhere, or because the director of opera wanted to develop a project and couldn’t afford it.”

On the other side of the ocean, Neef has faced similar, smaller scale challenges which are comparatively even greater, owing to the far lower rate of government funding for the arts in Canada. For the 2017-2018 season, 18.3% of the COC’s operating budget (roughly $33.4 million) came from government grants at all levels (federal, provincial, municipal); that figure doesn’t include funding for the operations of the Four Seasons Centre (formally known as the Canadian Opera House Corporation, or COHC), which, if added in, drops government support to less than 15% for the consolidated results of both companies. The COHC receives no government funding for its operations. Fundraising made up roughly 26.47% of the COC’s gross revenue for the 2017-2018 season (counting both COC and COHC).

BMO Financial Group has been the Season Sponsor for the 2017-2018, 2018-2019, and upcoming 2019-2020 seasons; other corporate partners include Volvo, RBC, and Sun Life Financial. The organization has specific performance sponsors as well as one for the Free Concert Series in the Richard Bradshaw Amphitheatre (TD). In addition, the COC hosts an annual fundraising gala, Operanation, which offers its VIP patrons perks like a private cocktail reception, opulent meal, and private performances from members of its Ensemble Studio, for whom the evening’s proceeds are fully dedicated. The event also features performances by contemporary Canadian pop bands like Broken Social Scene, Arkells, and Dragonette amidst the club-like atmosphere of the lobby of the Four Seasons Centre.

Thus, Neef’s experience balancing various sectors (public, private, corporate) and his ability to navigate positive corporate/philanthropic partnerships may serve him well when he goes to Paris in 2021. “Fundraising will become more important to European companies—that’s already a given,” he states. “And obviously you have a team [in Paris] who’ve been nurturing those relationships for a long time. Also, with a company like Paris, there’s a brand association that’s very, very interesting for corporations, because the organization carries so much weight.” That weight, which can be onerous for many European organizations, is one Neef sees as positive in terms of its relationship to the two-lane highway of music and fundraising. “It’s certainly going to be a lot to do [in 2021], but there’s a healthy history we can build on.”

Neef is, in fact, something of a history buff; it’s an area he formally studied, having graduated from the Eberhard Karls University of Tübingen with a Master of Arts in Latin Philology and Modern History. It’s clear opera is the area where he can combine his passions for history and music. Ask him about Meyerbeer and he’ll talk at length about the contextual relationships between eras of operatic presentation before naming Gluck, Berlioz, and Beethoven; from there he ruminates on Verdi’s connection with bel canto and his influence on Puccini. All of this knowledge finds its way into careful programming, though what the audience takes away from it is entirely individual. “Allow your audience to find their own way and figure out their own conclusions on why that specific work is important to see today,” he says. “And, once in awhile, it can just be important to see [an opera] for historic reasons. Sometimes you can say, ‘This was an important piece in 1858, and you should know about it.’ Just leave it there.”

In terms of his future programming plans for Paris, he thinks it’s important to acknowledge the past but not wallow in it. “We have easier access than ever before to 400 years of operatic repertoire, because of digitalization,” he says. “And we have access to pieces that have fallen in and out of audience favor, so it’s important for us to constantly revisit [those works] and say, ‘What are the pieces that really resonate?’ and construct a project around that. Sometimes we discover old pieces resonate much more than new ones.”

Not a fan of what he terms “themed seasons,” he is instead a “very big fan of themes emerging over the course of several seasons.” Programming opera is not “a self-contained season-to-season affair; it’s a continuity and development that over time becomes tangible for the audience.” That larger vision can be seen in his work with the Canadian Opera Company; there hasn’t been any one single theme to emerge within any one specific season, but there has been a notable arc of exploration. Neef has introduced a range of celebrated artists to Canadian audiences, among them renowned singers Ferruccio Furlanetto and Anita Rachvellishvilli, who appeared in 2014’s Don Quichotte, and Thomas Hampson and Karita Matilla, part of the world premiere of Rufus Wainwright’s Hadrian in 2018. Numerous celebrated directors have also had their work featured on the Four Seasons stage: Dmitri Tcherniakov (Don Giovanni, 2015), Peter Sellars (Tristan and Isolde, 2013; Hercules, 2014), and Claus Guth (Le nozze di Figaro, 2016), to name a few.

Neef helped to engineer a concert in 2017 featuring superstar soprano Anna Netrebko in her Canadian debut, along with her husband, tenor Yusif Ayvazov, and baritone Dmitri Hvorostovsky. (The one-off concert, titled ‘Trio Magnifico’, marked Hvorostovsky’s final appearance in Toronto before he passed away later that year.)

“It’s important to always reinvent yourself, to stay alert, curious and open” 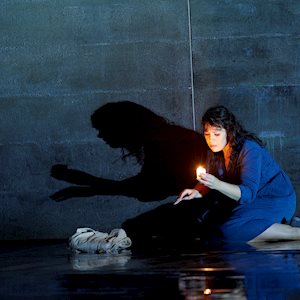 Not all of Neef’s decisions have been popular. There has been consternation over the lack of modern Canadian opera within the company’s programming, repercussions over its lack of diversity, and complaints about its choice of stage directors. A modern, and in some quarters wildly unpopular, production Aida directed by Tim Albery, first presented in 2010, will return to in April 2020, with celebrated soprano Tamara Wilson in the title role and tenor Russell Thomas (a regular on the Four Seasons’ stage) as Radames. Its announcement at the 2019-2020 season unveiling this past February provoked audible groans from sectors of the audience. While certain artistic decisions have angered those opera-goers who prefer a so-called ‘traditional’ production style, such choices underline Neef’s quiet, if firm, commitment to the art form’s place as a contemporary artistic experience that equally joins the worlds of music and theatre.

Opera, to Neef, is not an antique art form, which is why support of both up-and-coming singers and theatrically creative directors are, for him, twin tools which help to facilitate the experience and understanding of the art form in the 21st century.

“It’s important to always reinvent yourself, to stay alert, curious and open,” he says evenly. “The way I feel at the COC right now is that we climbed a very steep mountain over a few years and reached a high plateau on the national and international landscapes. Yes, there are things we still have to learn to do better, but I would hope that from that plateau where we are right now that we will just climb up.”