The Canadian Opera Company has announced its first full mainstage lineup after three seasons of COVID-forced closures. The 2022/2023 season is a solidly 19th-century affair, with the two temporal outliers being Mozart’s 1786 Le nozze di Figaro and Richard Strauss’s 1905 Salome.  In between, there’s early Verdi and Wagner in Macbeth (1847) and Der fliegende Holländer (1843), as well as two of opera’s most popular doomed lovers, Carmen (1865) and Tosca (1900). The company also plans to mount Pomegranate, a lesbian-themed work with music by Kye Marshall to a libretto by Amanda Hale that premiered at Toronto’s Buddies in Bad Times Theatre in 2019. Co-produced with Vancouver Opera, Pomegranate will play at the COC Theatre, aka the main rehearsal space at the company’s administrative headquarters.

Among the mainstage works, the only production new to regular COC audiences will be Verdi’s Macbeth, a COC co-production with Lyric Opera of Chicago, where Sir David MacVicar’s staging premiered last fall. Much of the praise and buzz around that centred on soprano Sondra Radvanovsky as Lady Macbeth, and she will reprise the role at the COC’s Four Season’s Centre. American baritone Quinn Kelsey, a memorable Rigoletto for the company, sings the title role, with Turkish bass Önay Köse also returning as Banquo and COC Ensemble Studio tenor Matthew Cairns as Macduff. Italian Maestra Speranza Scappucci, absolutely compelling with her supercharged reading of Rossini’s Il barbiere di Siviglia in pre-COVID 2020, is on the podium. 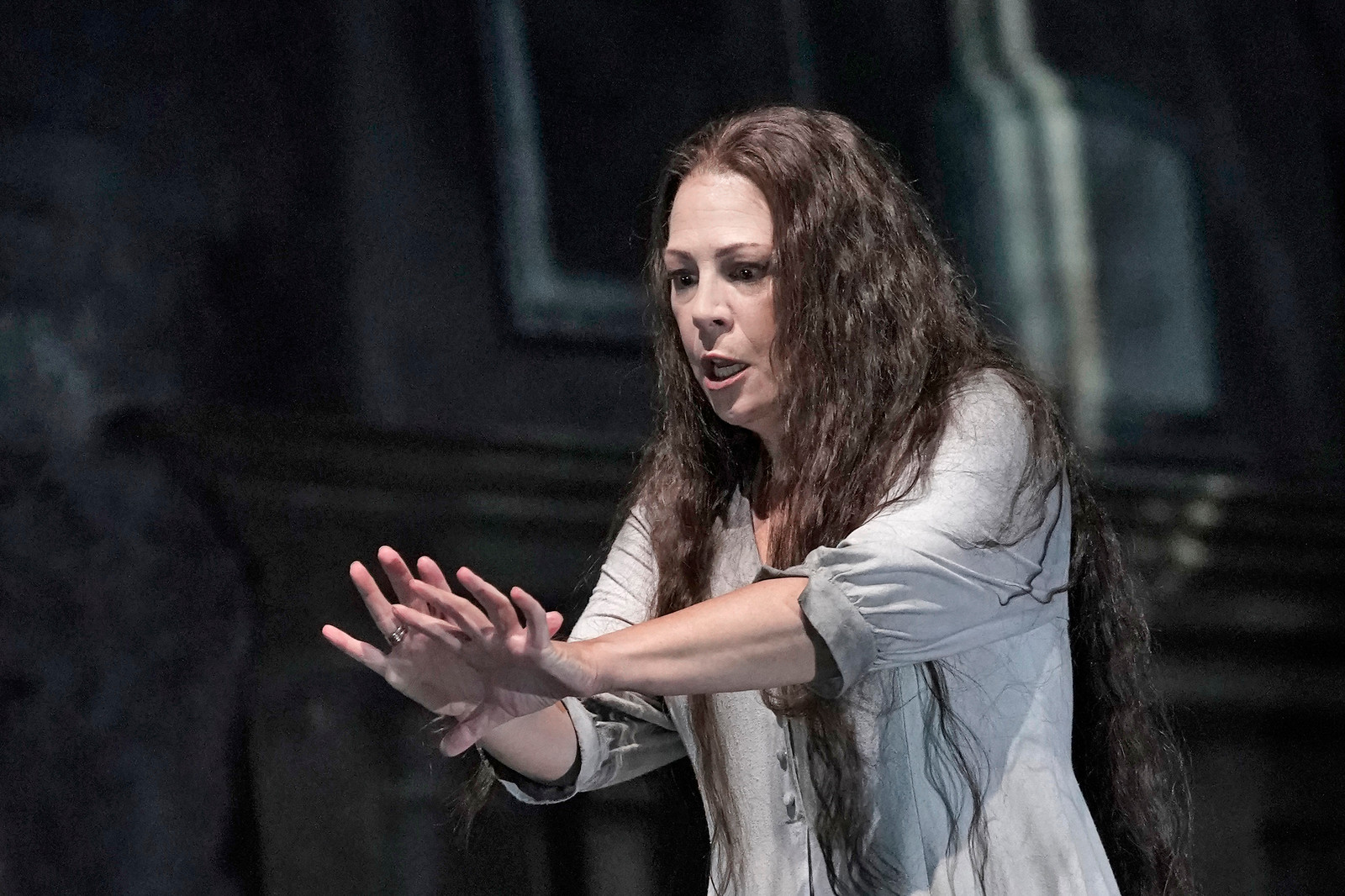 Macbeth’s companion in the April/May Spring 2023 season is a revival of the COC’s production of Puccini’s Tosca staged by Scottish director Paul Curran. Moldovan soprano Olga Busuioc, daughter of two singer-parents, makes her company debut in the title role, alongside Italian tenor Stefano La Colla as Cavaradossi (also a house debut) and, as the sinister Scarpia, British baritone Roland Wood, who made his Canadian debut with the COC in 2014 as Renato in Verdi’s Un ballo in maschere. Italy’s Giuliano Carella, a familiar figure on podiums around Europe, makes a relatively rare trip to North America to conduct.

The COC’s 2022/23 season begins with unfinished business, since both October 2022 productions were already on the roster of seasons cancelled by COVID. Wagner’s stormy Holländer, which launches the new season Oct. 7, is a revival of Christopher Alden’s 1996 production for the company. It comes from a period when the COC made a virtue of substantial one-act pieces, and this Holländer has enjoyed the greatest currency around the opera world and has been the most frequently revived at home. The casting features some welcome returns to the Four Seasons stage; Danish bass-baritone Johan Reuter, an eloquent and imposing Walküre Wotan in 2015, takes on the title role; German bass Franz-Josef Selig, who made his Canadian debut as King Mark in the Peter Sellars/Bill Viola Tristan und Isolde at the COC in 2013, sings the ethically challenged Daland; and American soprano Marjorie Owens, who most recently in Toronto shared the title role in the prettily static Robert Wilson staging of Puccini’s Turandot, comes back as the obsessed Senta. British tenor Christopher Ventris, who was slated to sing the title role in the COC’s now twice-postponed staging of Wagner’s Parsifal (we hear the company is looking for another million-plus dollars to get it on the stage), sings Senta’s hapless would-be lover, Erik. 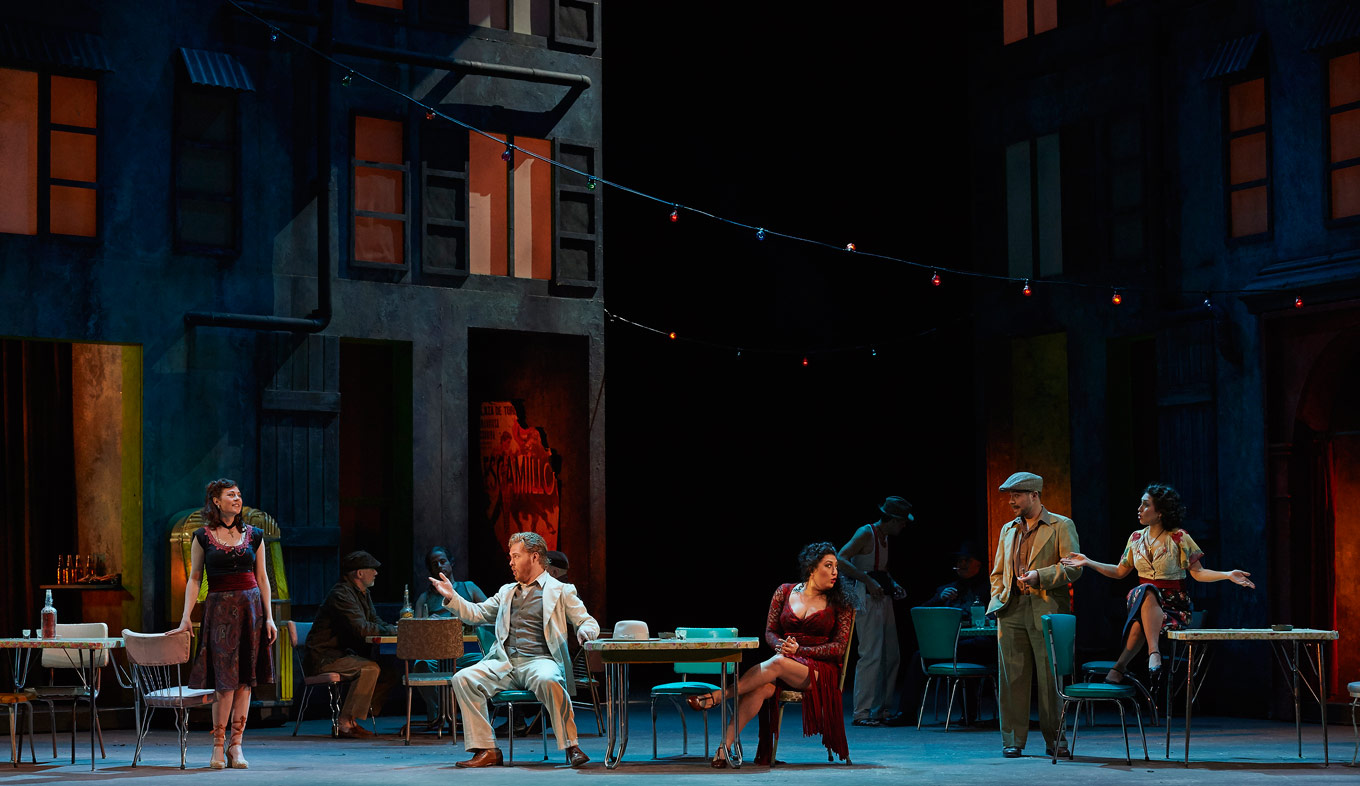 The Carmen playing alongside Holländer is also a vintage COC production, first staged in 2005 by Mark Lamos, then revived in 2010 under the direction of Justin Way and again in 2016 directed by Joel Ivany. Now the Artistic Director of both Edmonton Opera and Against the Grain Theatre, Ivany helms this 2022 revival. The two female leads are double cast. In the title role, American mezzo J’nai Bridges shares the assignment with former Ensemble Studio member Rihab Chaieb. And as Micaëla, soprano Joyce El-Khoury splits the role with another Ensemble graduate, Anna-Sophie Neher. Argentinian tenor Marcelo Puente, who sang Cavaradossi to Adrianne Pieczonka’s Tosca for the COC in 2017, returns as Don José, and American baritone Lucas Meachem, heard as Marcello in the COC’s 2019 La bohème, struts his vocal stuff more energetically as Escamillo. Canadian bass Alain Coulombe has been cast in all four stagings of this production, this time returning as Zuniga.

Friedrich Nietzsche famously cites Carmen as the perfect opera in his 1888 polemic, The Case Against Wagner: A Musician’s Problem, so there’s a deliciously instructive point to pairing Bizet and Wagner if you want to pursue the debate. Less obvious is the pairing, in the COC’s Winter 2023 offering, of the season’s two temporal outliers, Mozart’s Le nozze di Figaro and Richard Strauss’s Salome. At one level, of course, they’re both about dysfunctional families, though they’re so disparate in morality and musical style that it’s hard to make a connection. Perhaps they are best considered together as model specimens of opera staged by auteur-directors, the Mozart by Germany’s Claus Guth and the Strauss by Canada’s Atom Egoyan. Both bring strong creative voices to their work, Guth regarded as something of a master of plumbing psychological depths and filmmaker Egoyan no slouch in exploring the darker sides of human behaviour. 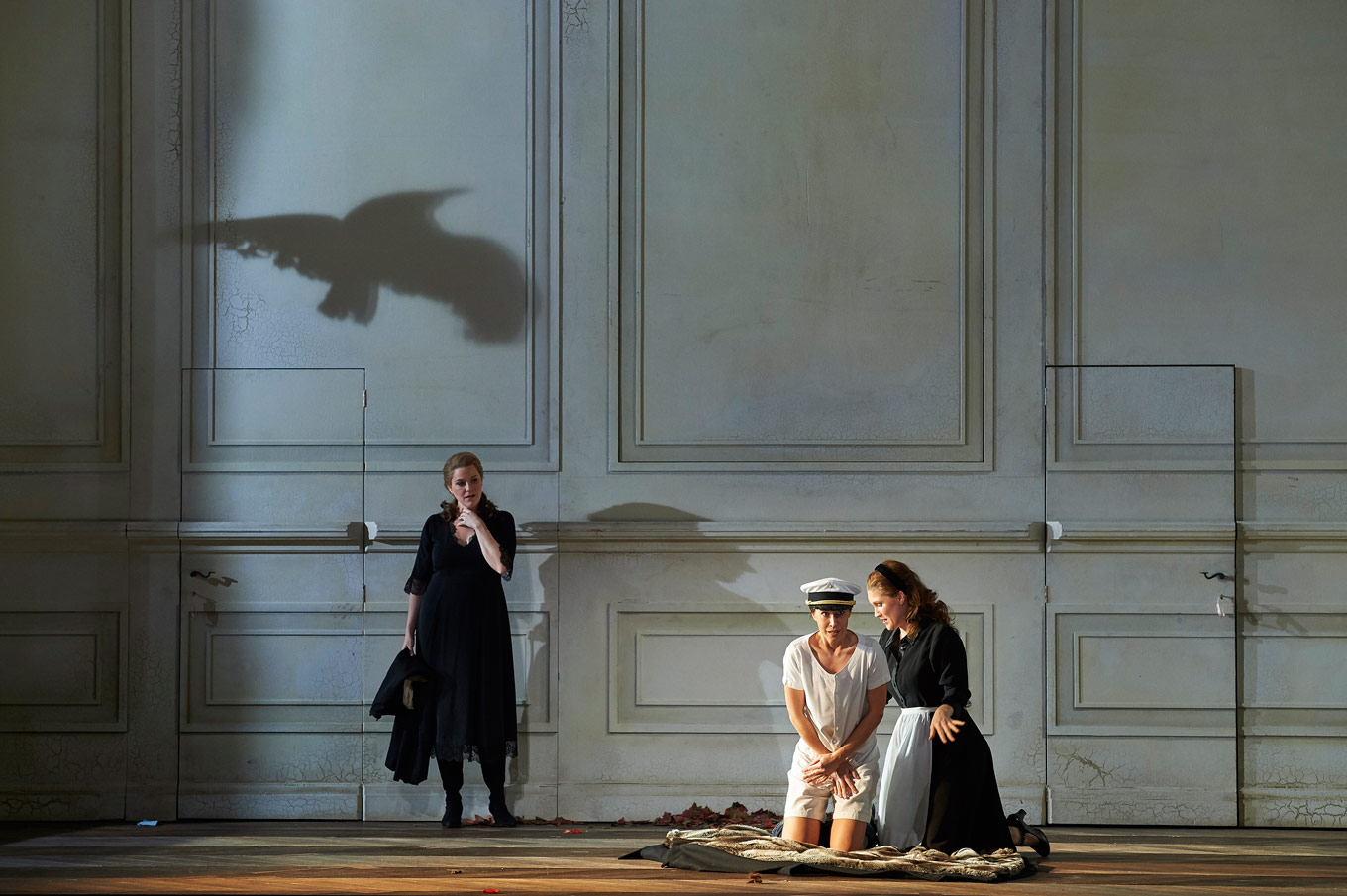 The Mozart production is now owned by the COC but was originally created for the Salzburg Festival in 2006 and made its debut at the Four Seasons Centre in 2016. Some of the cast of that staging return in the same roles, including American mezzos Emily Fons as Cherubino and Helene Schneiderman as Marcellina, and Canadians Robert Pomakov, bass, as Dr. Bartolo and Doug MacNaughton, baritone, as Antonio. There’s an appealing quartet of newcomers. Former Ensemble Studio member Gordon Bintner, who closes out the COC’s truncated 2021/22 season as Papageno in Die Zauberflöte, sings the Count, and Italy’s Luca Pisaroni, as agile as a bass-baritone can be in Rossini’s Maometto Secondo at the COC in 2016, is Figaro. Newcomers are British soprano Louise Alder, winner of the Dame Joan Sutherland Audience Prize at the 2017 Cardiff Singer of the Year Competition, as Susanna, and the South African-Dutch soprano Johanni van Oostrum, touted as a rising star, as the Countess. For the most part, this is the cast originally announced when the production was part of the cancelled 2020/21 season, and with the same conductor, Santa Fe Opera Music Director Harry Bicket. 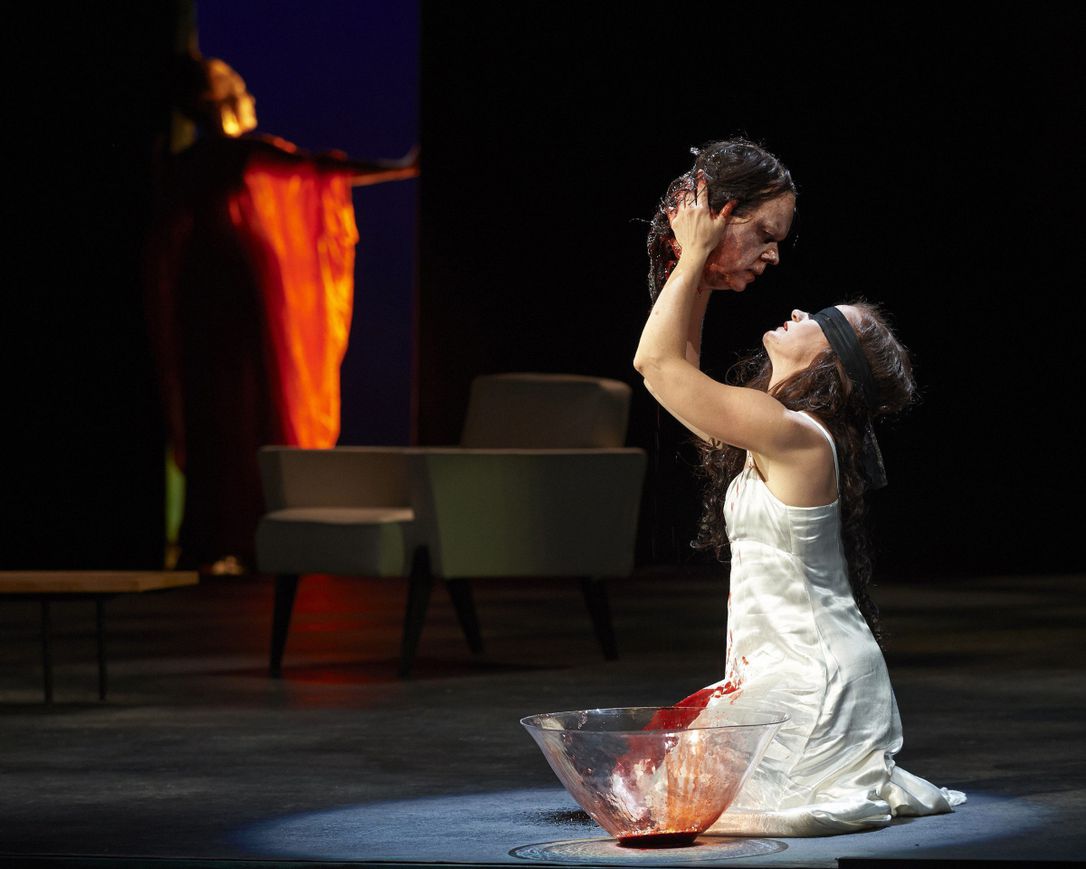 Atom Egoyan’s Salome dates back to 1996 (another of the COC’s one acters from that period), and he revisited the production for the COC in 2013. This latest revival has an interesting lineup, with Ambur Braid, another former Ensemble Studio member, in the title role. Most recently at the COC as the long-suffering wife, Sabina, in Rufus Wainwright’s Hadrian (she didn’t get the man, but got the best aria in “Will You Have Egypt With Me?”), Braid has already won kudos as Salome in a production for Opera Frankfurt by the Berlin Komische Oper’s Barrie Kosky. She’s joined in Toronto by Canada’s Michael Schade as Herod and Finland’s Karita Mattila, a renowned Salome herself, as Herodias. Quebec’s Frédéric Antoun and Carolyn Sproule round out the principal players as Narraboth and Page of Herodias. COC Music Director Johannes Debus conducts Strauss’s ground-breaking score.

All in all, this is a safe, middle of the road season that to some extent picks up pieces and contracts left hanging by COVID cancellations over the past three years. We are still in uncertain times, so a degree of caution is understandably in play. Who is on stage is more interesting than what is on stage in this lineup since all the productions except Macbeth have been seen before, and in some cases not so long before. In the end, though, after all the shutdowns, I’m just grateful to have a full season to build on again.