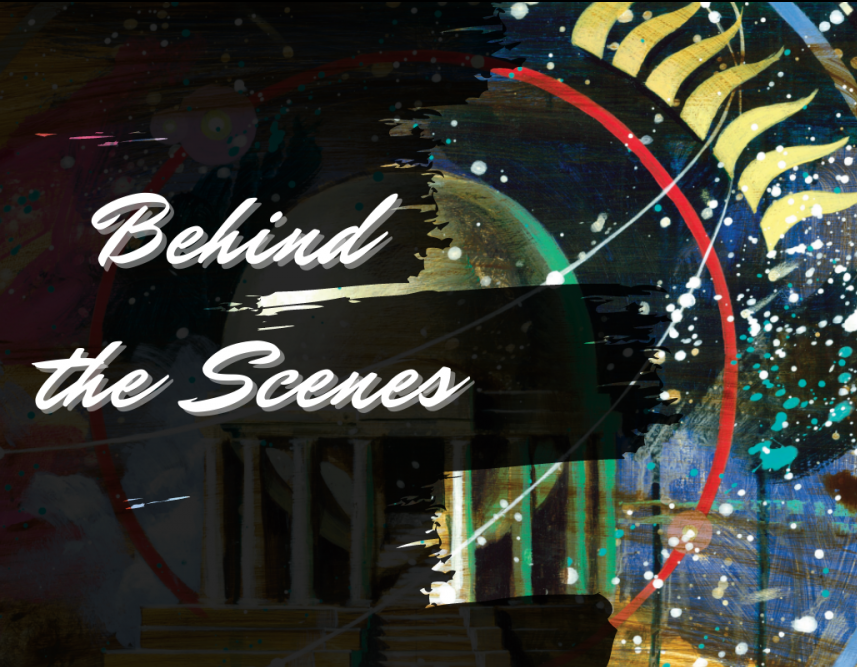 Opera Canada launches our new Behind the Scenes series, an exclusive look ‘behind the curtain’ with the talented people supporting opera companies across the country…

The paintings below were created by artist and set designer Gerard Gauci for Opera Atelier’s fall 2020 production of Something Rich and Strange.

OA founders and artistic directors Marshall Pynkoski and Jeannette Lajeunesse Zingg have collaborated with Gauci since their first fully-staged production in 1985. His art has helped the company integrate the worlds of music, art and dance and, after 35 years, Gauci’s sets have become an intrinsic part of the OA experience.

This painting called “The Dreamer” will open and close Something Rich and Strange, a title deriving from Purcell’s setting of “Full fathom five”, Ariel’s song from The Tempest. The performance will include arias from Lully, Handel, and of course, Purcell.

This otherworldly figure will be the first thing the audience sees when entering the theatre and the last thing when they leave, said OA’s Pynkoski. The production will be the company’s first-ever live-stream, and for Gauci this has been a chance to blur the line between set design and traditional painting.

“Because we have to be cautious of the number of people who are in a concert hall at a given time, we have decided to use Gerard’s paintings as projections rather than gridding them and having them painted as full backdrops,” Pynkoski said. “This means we will require a fraction of the number of crew members that the installation of a hard set would entail.”

The painting titled “The Enchanted Garden” will accompany an excerpt from Lully’s Armide, sung by Tenor Colin Ainsworth. It depicts a magical landscape that sorceress Alcina created to entrap Renaud, a Christian knight.

“Normally, if you’re designing a set, you’re thinking a lot about space. The libretto is very important in designing a set because you’re given a lot of concrete information there, and you have to create that world in a concrete way,” Gauci said.

Since Something Rich and Strange will follow a more open-ended narrative than traditional productions, Gauci treated his designs as an exercise in imagination.

“It keeps the brain…stimulated because it’s always having to ask, ‘what is real, what is not real, what has dimension, what is alive?’”

“It’s the sort of dream-like quality that will be the thread that holds the production together,” Gauci said. “I’m looking at the libretti, I’m looking at the words, and I’m just allowing them to suggest things…I don’t like to be in the driver’s seat, as it were, I like to respond to suggestions, and a lot of that suggestion for me is kind of unconscious [and] wells up—ideas that have come out of nowhere and I respond to them.”

Gauci’s paintings give the illusion of a third dimension on a flat surface in the trompe l’oeil style that was popular in 17th and 18th-century set design. This signature of Gauci’s work adds to the dream-like element of this particular production, albeit as a projection this fall.

“It keeps the brain of the viewer stimulated because it’s always having to ask, ‘what is real, what is not real, what has dimension, what is alive?’” Gauci said. “In set design and in painting, it’s very important to keep the eye engaged, and I find…trompe l’oeil is a very effective way of doing that.”

This painting, “The Creation Dream,” will be used for the finale of Something Rich and Strange.

“The finale of Something Rich and Strange features the Passacaille from Purcell’s King Arthur and offers a particularly rich showcase for our singers and the Artists of Atelier Ballet,” said Pynkoski. “By the end of the Passacaille, the entire cast have fallen asleep on the stage in the same postures in which we first encountered them. Gerard’s painting underscores the idea that the entire evening has been a vision or a dream in which the audience has participated.”

“we were sitting in my studio and…both of us sort of looked over the easel and there was this painting, sitting there”

Gauci had created this piece prior to the show’s conception, he said.

“This is one of the [paintings] that I had created, just as a personal piece, that had a theatrical reference, but I never really knew what to do with it,” Gauci said. “And then when Marshall suggested this show, we were sitting in my studio and we were talking about the imagery and both of us sort of looked over the easel and there was this painting, sitting there.”

In the end, “Creation Dream” was a catalyst for many other set pieces audiences will see this fall.

“It’s funny when you’re working intuitively and just sort of letting things happen. They have a life of their own. I try not to question it too much,” Gauci said. “Sometimes we just do things and we wonder ‘why did I just do that?’ It doesn’t fit into anything you’re actually working on at the time…You just put things away and then it makes its purpose known later on.”

In the next installment of our series, we’ll be exploring a different Behind the Scenes perspective. Hint: Carmen.

Dear composer…Rachel Krehm asks: To beam, or not to beam?

Songs for Murdered Sisters: Eking Beauty out of Tragedy

Jonelle Sills: “I am choosing not to be lazy but to engage in conversations and ask questions.”