Opéra Comique Armide “All critics seem to agree upon one thing at least: Véronique Gens is unsurpassable as Armide.”

Purists apparently have some bones to pick with this new production of Armide, judging from the various and contradictory criticism in the French press, but for me, the essential elements were united to make for a very satisfactory performance, to say the least.

First of all, the magic and excitement of the score are palpable, beginning with the overture. There are not many, but a sufficient number of recordings of the work to know how dramatically different these first few bars can sound, from Ricardo Muti’s pompous 1996 La Scala production to Ivor Bolton’s detailed, somewhat rigid 2013 Amsterdam version or Marc Minkowski’s reference recordings from 1998 and 2016. But under the hyper-sensitive baton of Christophe Rousset, conducting his period orchestra, Les Talens Lyrique, the score takes on a gorgeous hue with finely articulated contrasts; the tempo is not rushed but moderato as indicated in the score.

Then the curtain rises to reveal an arabesque of patterned metal frames highlighted by fluorescent bars and rings, a reference to crusader-era Palestine imagined by designer Bruno de Lavenère. Later an ancient, gnarly, bent tree, a witness to momentous historical events, becomes the central ecosystem of the drama where moss grows thick, demons emerge from under the roots, and singers deliver their arias perched high on its branches.

Swiss director and actor Lilo Baur employs these designs and Alain Blachot’s striking costumes in her subtle storytelling. Formerly a member of Simon McBurney’s troop, Théâtre de Complicité, famous for its collaborative methods, she masters her craft on all levels: visual, musical, and theatrical. There are references to Armide’s past, for example, in her multiple layers of parchment clothing, illuminated manuscripts, telling the tales of wars and victories, and her own against the crusader armies of King Godefroi of Jerusalem. She has seduced the enemy soldiers with her magic powers and famed beauty, but one of them, Renaud, resists her and eventually becomes her nemesis. Laurent Castaingt’s lighting and videos shift from landscapes to seascapes and storms to fair weather as if controlled by the whims of heavenly powers. 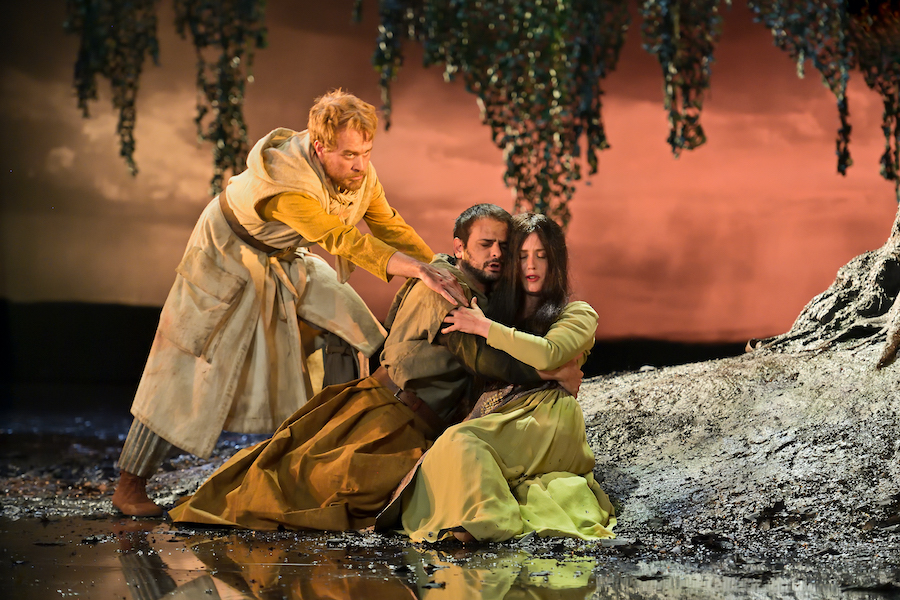 The first scene opens with the duo of Armide’s confidants, Phenice, French soprano Apolline Raï-Westphal, and Sidonie, Canadian soprano Florie Valiquette who sing the princess’s praises. Excellent in these roles and the others they interpret; their voices blend beautifully. Baur gives a lot of attention to staging these smaller scenes; thus, they are lively, well-paced, and essential to the drama. With her beautiful timbre, Valiquette is particularly seductive as the demon Mélisse.

The voice of reason, Armide’s uncle King Hidraot (impressively sung by Edwin Crossley-Mercer in his distinct, burnished bass) is unsuccessful in convincing her to settle down and marry and give an heir to the throne—from there, the plot thickens.

Later, Anaïk Morel makes a remarkable appearance as La Haine, clothed in strips of parchment with lettering in ancient alphabets tattooed on her skin. With her earthy tones, La Haine is more an early ancestor to Wagner’s Erda and an incarnation of truth rather than hate. Here, invoked by Armide, La Haine has the power to instill her with hatred instead of love toward Renaud, but Armide finally refuses, preferring the tortures of unrequited love. 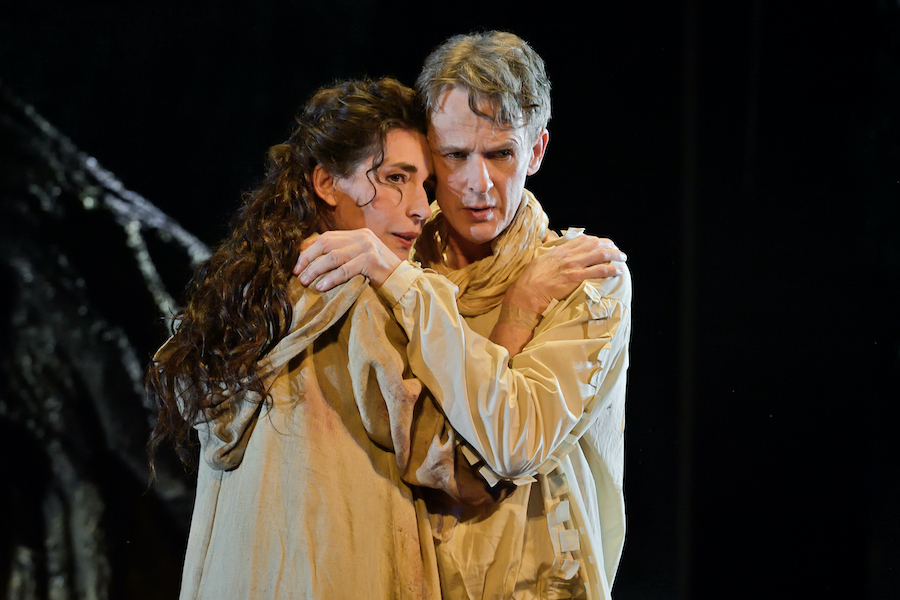 All critics seem to agree upon one thing at least: Véronique Gens is unsurpassable as Armide. A lionized expert of French baroque, she delivers the alexandrine verse to perfection while spinning her phrases on inexhaustible reserves of breath. Gluck’s setting of Philippe Quinault’s text (the same one set by Lully 90 years earlier) focuses on Armide’s inner conflict and gives her a powerful range of expressive means through declamation, sumptuous vocal lines, and accompanying orchestral colors. Gens uses these to highlight the psychological richness of her character, thus giving a profoundly touching interpretation.

For Ian Bostridge, the response is equivocal—for French baroque aficionados he falls short of expectations for pronunciation and vocal colour, while for Bostridge aficionados, he is mesmerizing. I fit into the second category. Because whether he is singing Britten, Bach, Schubert, or Gluck, the English tenor is entirely guided by the text; he inhabits each word and possesses all the vocal qualities to bring them across.

Finally, two crusaders, Ubalde, the excellent baritone Philippe Estèphe and the Danish Knight, superb tenor Enguerrand de Hys, brave Armide’s monsters and enchantments to rescue Renaud and bring him to his senses. Armide, powerless to retain him, remains in her palace in desperate longing until she succumbs to her sorrow.

Though many don’t agree, this production is a rare achievement, beginning with two outstanding artists, Gens and Bostridge, while the collaborative and extraordinary qualities of all the singers under the dramatic and musical direction of Lilo Baur and Christoph Rousset, ensure its success.