I feel I must preface this review with the confession that I have never–not ever–seen a holiday-season Messiah. I am grateful that Messiah/Complex, a filmed collaboration between the Toronto Symphony Orchestra (TSO) and Against the Grain (AtG) Theatre, seen Dec. 13th, was my first.

Messiah has long been a Christmas tradition for some, but as a Jewish-Canadian oft-excluded from mainstream holiday cheer, it was lovely to see a joyful adaptation by co-directors Joel Ivany and Reneltta Arluk that deftly crosses denominations. Their Messiah/Complex is an hour-and-18-minute-long film celebrating different facets of the Canadian experience with 12 soloists and four choirs representing every Province and Territory to the gorgeous sounds of the TSO.

The arias were translated into several languages, allowing singers to best express emotion in the language that felt right–and the impact was clear in the heartfelt joyousness of the performances.

This choice to include many singers–departing from the typical 4-soloist structure of a traditional Messiah–provided unusual musical variety between soloists and choirs on the crystalline recording. The featured choirs were Toronto Mendelssohn Choir (with a sublime “Hallelujah” chorus), UPEI Chamber Singers, Le Choeur Louisbourg and the Halifax Camerata Singers. Though they all gave powerful performances, most memorable were the UPEI Chamber Singers led by Sung Ha Shin-Bouey bouncily singing “And He Shall Purify” in mismatched-but-well-coordinated bright colours. It was like experiencing the pure joy of Christmas carollers as a character in a Hollywood rom-com.

The theme of shoes–Britten’s black stilettos strutting through Davie Village in Vancouver, BC. and Diyet’s moccasins overlooking the icy landscape of the Kluane Region in Yukon–recurred meaningfully throughout Messiah/Complex. I saw it as a zoomed-in lens on the details that make Canadians’ lives so different from one another. Madore’s hockey skates and Tim Hortons’s cup presented the more ‘familiar’ narrative. 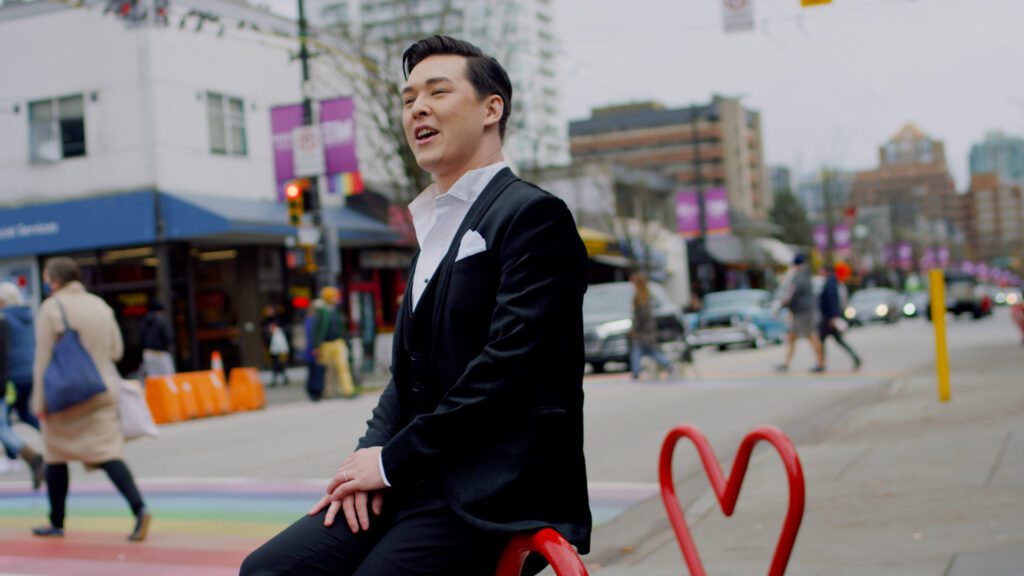 Each aria was filmed on-location in accordance with local health guidelines, and presented “free of charge to every soul in need of a musical lift.” The stunning cinematography felt like the closest thing to the cross-country road trip I wanted to take with my partner in summer 2020 before the pandemic ravaged the country and world. However, the pursuit of a million fancy shots did have a tendency to distract from the music in spots, specifically in the case of Britten singing a version of “Comfort ye my people.” His performance was oozing with mirth and personality that could’ve been more poignant without all the angles.

Other soul-lifting highlights were the performances of Catherine Daniel (“Why do the nations so furiously rage together?”) in Toronto’s Graffiti Alley, as well as Andrea Lett (“Rejoice Greatly, o daughter of Zion”) in Pinawa Provincial Park, MB running through crisp white snow with the inquisitive child in all of us. Miriam Khalil singing “If God be for us” in Arabic in the midst of Ontario church ruins with haunting high notes was unforgettable. Returning to Koerner Hall–which is minutes from my apartment, but might as well be hours away after months of self-isolation–felt like returning home after a journey.

AtG turned the music of G.F. Handel hyper-local, but also transcendent of the Euro-Christian experience. It’s hard to imagine watching my first ‘regular’ Messiah next year.

Messiah/Complex is free to watch online until Jan. 7th, with registration.