In this next instalment of her encounters with opera people and their pets, Dawn Martens meets dogs with a keen sense of fashion and looking good, hears tales of heritage chickens that came to a violent end, and ponders the reason why otherwise music-loving animals might be averse to Richard Strauss.

If you missed the first chapter of “Best in Show: Canada’s Opera Pets” featuring Rihab Chaieb, Dean Burry & Kelly Robinson, you can read it here. 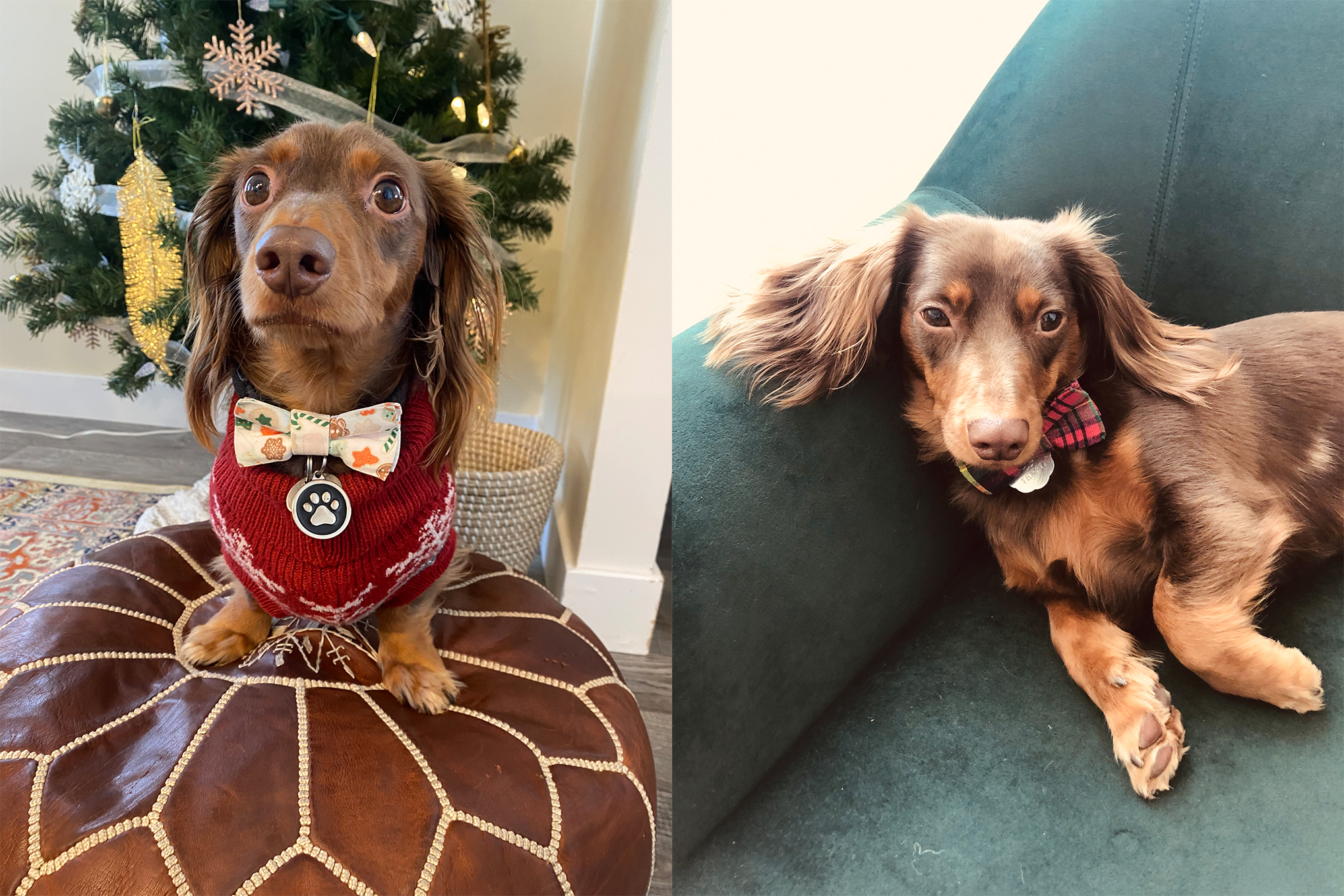 The name of my 3-year-old puppy (yes, for me he’s still a puppy) is Mister Watson. I named him Mister Watson because I’ve always liked the character of John Watson in the Sherlock Holmes series and I thought it would be a funny name for a tiny-legged dog. I also thought it would be a good name for a dog who always wears a bow tie. Since I’ve adopted him, he has worn a bow tie every day. It’s his trademark.

Mister Watson always seems to like listening to music, but since he is a big mamma’s boy, he stands too close to me when I practice and starts “singing” (it’s more like screaming) while I sing. I have to leave him in another room so I can work.

He never was in a show with me, and I don’t think it would be possible. But he has met a lot of singers and other artist colleagues. The first few months I had him, I couldn’t leave him by himself much, so several friends took care of him while I was working. They were mostly singers and they all fell in love with Watson. He became so popular that I had no choice but to bring him to the Opéra de Montréal office to please everybody. He has the best personality, so everyone succumbs to his charms. I try to have him travel with me as much as possible. I know he misses me when I’m not there, but I honestly think that I miss him even more when he’s not there.

I adopted Watson because I was at a point in my life when I needed to take care of something other than myself. When you start a professional career and deal with all the stress it brings, you begin to see how unhealthy and obsessive it can be when your own body is literally your instrument and livelihood. By taking care of Watson, who needed me very much, I was able to keep enjoying myself in my work and not become obsessive about it. He is the best thing that happened to me. Even though I have to be more organized in planning my professional life by thinking about his needs as well, it is worth all the trouble. Watson kept me mentally healthy during this pandemic.

Watson’s sole purpose is to be funny.  Every time someone calls me on the phone and I’m in a conversation with an ‘’invisible’’ person, he thinks that I’m talking to him. He gets super excited and brings me all his favorite toys so I can play with him. He loves water. In the summer, I fill a small kids’ pool for my nieces, but he is always the first one to throw himself into it. It can be problematic with those pools at dog parks, where the water is more a mix of mud and dirt left by other dogs that have played in them all day. But Watson just jumps in and ends up joyfully and completely covered in mud. Now, I always put a towel in the car, just in case. Also, when Watson decides he loves someone, he will not stop bringing them toys, making small impatient noises as he waits for them to be playtime buddies. 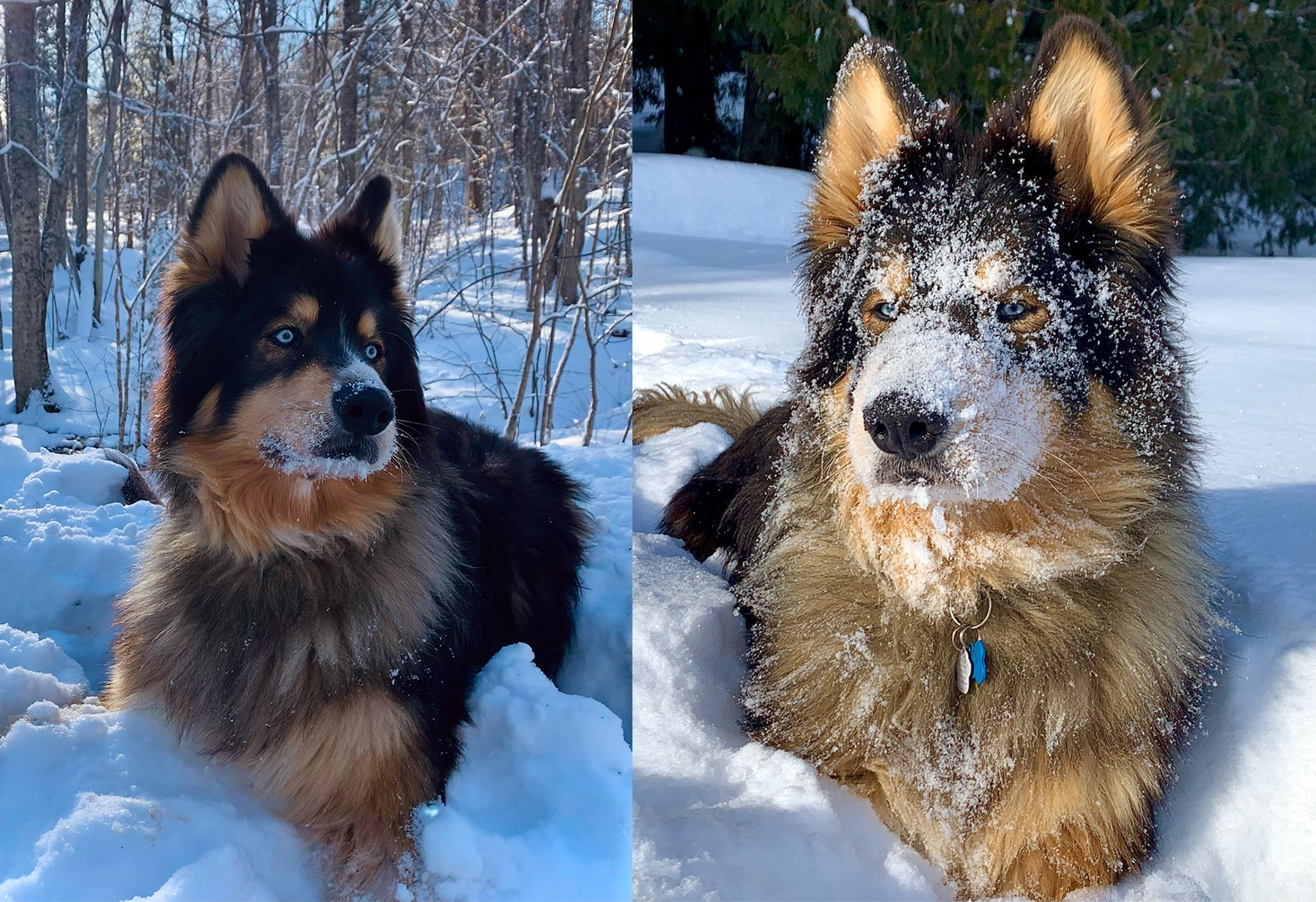 I adopted Zeva when she was five years old, so I don’t really know why her name is Zeva. Very often, people think her name is “Diva,” which is a great name for an opera dog! She is 12 and is a rare mix of Bernese Mountain Dog and Husky. The Husky breeder had a big surprise because he didn’t know that one of his females had had an adventure with a Bernese.

Zeva helps me with my routine. I must wake up early every morning to walk her, even if I had a show the night before. She really enjoys music and she’s always at my feet when I rehearse at home. Although she has never appeared on stage with me, she did appear in La Presse newspaper once after journalist Judith Lachapelle did an interview with me on the street. Lachapelle just stopped us because she thought Ziva was so beautiful. All my colleagues know Zeva through Facebook and Instagram, and they always ask about her; they all want me to bring her to rehearsal. When I work with my accompanist, Zena comes along and patiently listens.

She travels with me sometimes when I sing in Quebec, but she has never taken a plane. She doesn’t really enjoy car rides, so I can’t imagine her on a plane. And she’s big, almost 100 pounds, so not easy to travel with. When I leave for a while, she stays at home with my fiancé. She doesn’t recognize me on Facebook. If she can’t smell me, I don’t exist!

As a singer, you spend a lot of time rehearsing alone at home, so I enjoy her presence. She’s also always a good reason to take a break and go for a walk during the day; I love to take long walks in the woods with her. And she’s a showstopper! I can’t take a walk with her without at least one person stopping me to ask what kind of dog she is. One owner stopped me and said: “Don’t say it to my dog, but she is the most beautiful dog I’ve ever seen!” She won a beauty contest a few years ago in Quebec—the most beautiful dog of the Laurentians. Her life is outside. She will choose to stay outside instead of eating. When I’m at the cottage, she asks to go out at 6 or 7 in the morning and doesn’t come back inside before 11 or midnight, even during winter. Sometimes, when it’s snowing, I can’t see her because she’s covered with snow and she sleeps there, happier than ever. She’s a very easy and independent dog, and because of her independent nature, her nickname is gros chat (big cat). 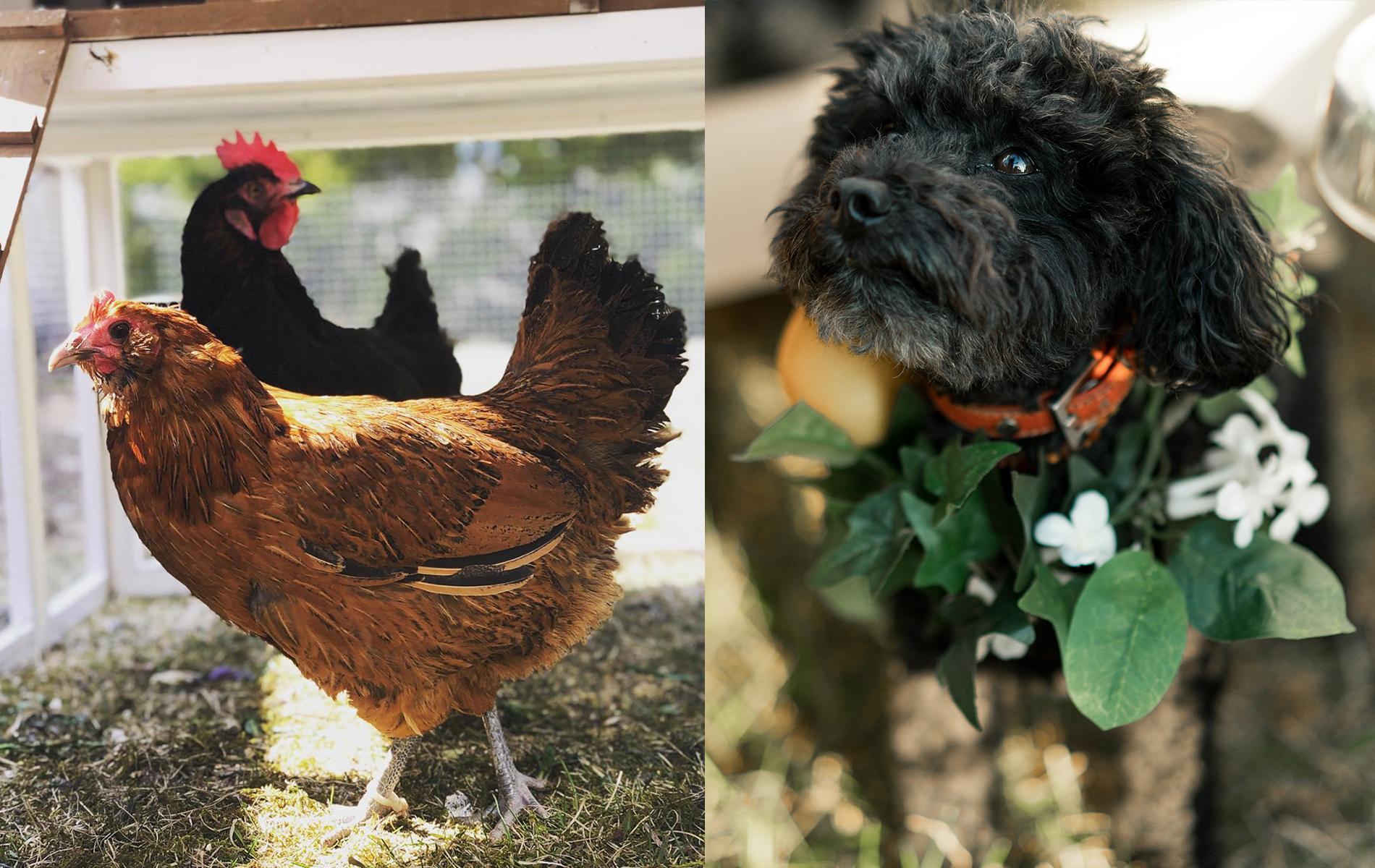 My husband and I bought some heirloom chickens at the beginning of COVID. They were our major source of entertainment as they foraged around the yard all day, tried to get into the cabin, dust bathed, and then tucked themselves in at dusk. They loved their tomato snacks and slurped up spaghetti like…little pigs. They had such personalities.

Our first round were gorgeous. They were named Georgiana, Duchess of Cavendish, and Liza (Minnelli). These two went feral and decided they preferred sleeping in the trees at night. This didn’t work out for them. Then we had Gladys, Mona, Ruth and Gretchen, (an absolute cannibal), who were all incredible layers. Ruth was eaten by a hawk, which was a traumatizing day for all of us. She was always the slowest, poor thing. The remaining ladies were eaten by a fox last Easter, which timed well with the reopening of Europe’s theatres. Chickens don’t travel well. They loved singing, although they didn’t lay eggs for two or three days after I rehearsed the final scene in Salome.

Our dog’s name is Walter, named after our fathers. Yes, both our fathers were named Walter, so this is their namesake and favourite grandchild (if you ask us). He is a Toy Poodle and will be seven years old in April. Walter has his very own lifestyle. He loves laps, spooning, eating Dentastix and romancing his lambies.

Walter is a very well-behaved boy and has met many wonderful people in the biz. He is an excellent judge of character and never forgets his favourites, even after many years without seeing them. His joyful reunion sounds include a very operatic squeal and some cooing. Walter sings Mozart coloratura and, most recently, Norma. This makes it difficult to have him onstage in a non-singing role, unfortunately. Unless it’s Strauss; he never sings along to Strauss.

Walter travels everywhere, and he’s most often in the dressing room with me, comforting the backstage crew as well as me. He is just such a sweet boy and always wants to snuggle. This comes in very handy. Having to get out for walks and sticking to a schedule despite jet lag and performance hours is healthy, and he makes meeting people much easier. Six years ago, at a French bistro, he hopped onto the lap of a woman who has become a dear friend in Frankfurt.