In the third instalment of Best in Show: Opera Pets, we meet a yodeling Chisenji, a pair of rambunctious Siberian Huskies and a gentle Tabby who can still defend her turf. If you missed the first or second chapters of “Best in Show: Canada’s Opera Pets”, you can read them here: Chapter 1 | Chapter 2.

Lily is our 3-year-old rescue Chisenji (Chihuahua Basenji cross). We saw her picture on the rescue website and had a feeling she was meant for us. Changing her name never occurred to us since she was already 9 months old and responded well to her name. She is very much a “Lily.”

Lily’s early life is a bit of a mystery. We know she was surrendered because she was too energetic and hard to manage. She can be very reactive and gets very agitated and barks very loudly if there are loud noises, loud laughing, fireworks, thunder or, oddly, the Netflix sign in. Despite her reactivity, Lily is incredibly gentle and loving. She loves to snuggle and fall asleep on the couch. When I return home from a contract abroad, she always has a very excited greeting with lots of licking and tail wagging. The passage of time seems to be hard to grasp for Lily; she will give you an equally excited greeting if you’ve been gone for weeks or just come back in after taking out the recycling.

We originally were looking for a dog that could travel with us, that could fit under the seat on the plane.  Given Lily’s personality and size (26 lbs), this is not possible. The idea of crating her and putting her in cargo fills us all with anxiety so that will never happen. It became clear when looking for a dog, especially a rescue, you can’t expect to fulfil a shopping list. She is also a homebody who will be avoiding the stage.

It became clear immediately that music, singing, even loud singing, doesn’t bother her at all. She likes to join me when I practice, crawl under a blanket and fall asleep. Basenjis are apparently silent dogs, but Lily missed out on that gene. She does have the Basenji yodel, which she reserves for playtime. When her ball falls off the couch, Lily would rather yodel at it than go and get it. Like other family members, she believes singing is the solution to most problems.

Hitchcock is 8 years old and named after Alfred Hitchcock; Karloff is 4 and named after Boris Karloff. Hitch and Karloff are brothers from different litters; the parents are Kaiya (Mom) and Takuyok (Dad).

Hitch and Karl have sat in on many rehearsals at our house or at the rehearsal venues. They have both occasionally appeared in concert at our side, though at times that can be very interesting because huskies like the sound of their voices and will join in! We have had singers stay at our house over the years, and opera singers have shared their bed overnight with Hitch or Karl or both. It certainly can get a little cozy. We call that a Two Dog Opera Night.

When we used to drive up to Kenora from Toronto for concerts a few times a year, Hitchcock would always travel with us on the long journey, and he loves the pet friendly hotels. There is nothing better after a long night in the theatre or concert venue or rehearsal hall than coming home to be excitedly greeted by two big, exuberant Huskies. Many wet kisses, that’s for sure!

Hitchcock was unintentionally an opera star in one of our shows. Edward was directing Madama Butterfly for Opera Belcanto of York at the Richmond Hill Centre for the Performing Arts. He had created a series of projections for the show. Butterfly was in her death scene. The projection was very stark and dramatic. But the computer running the projections had its own ideas and a desktop picture of Hitchcock in a bright pink cap getting bathed at the spa appeared on the full scrim. Oops! 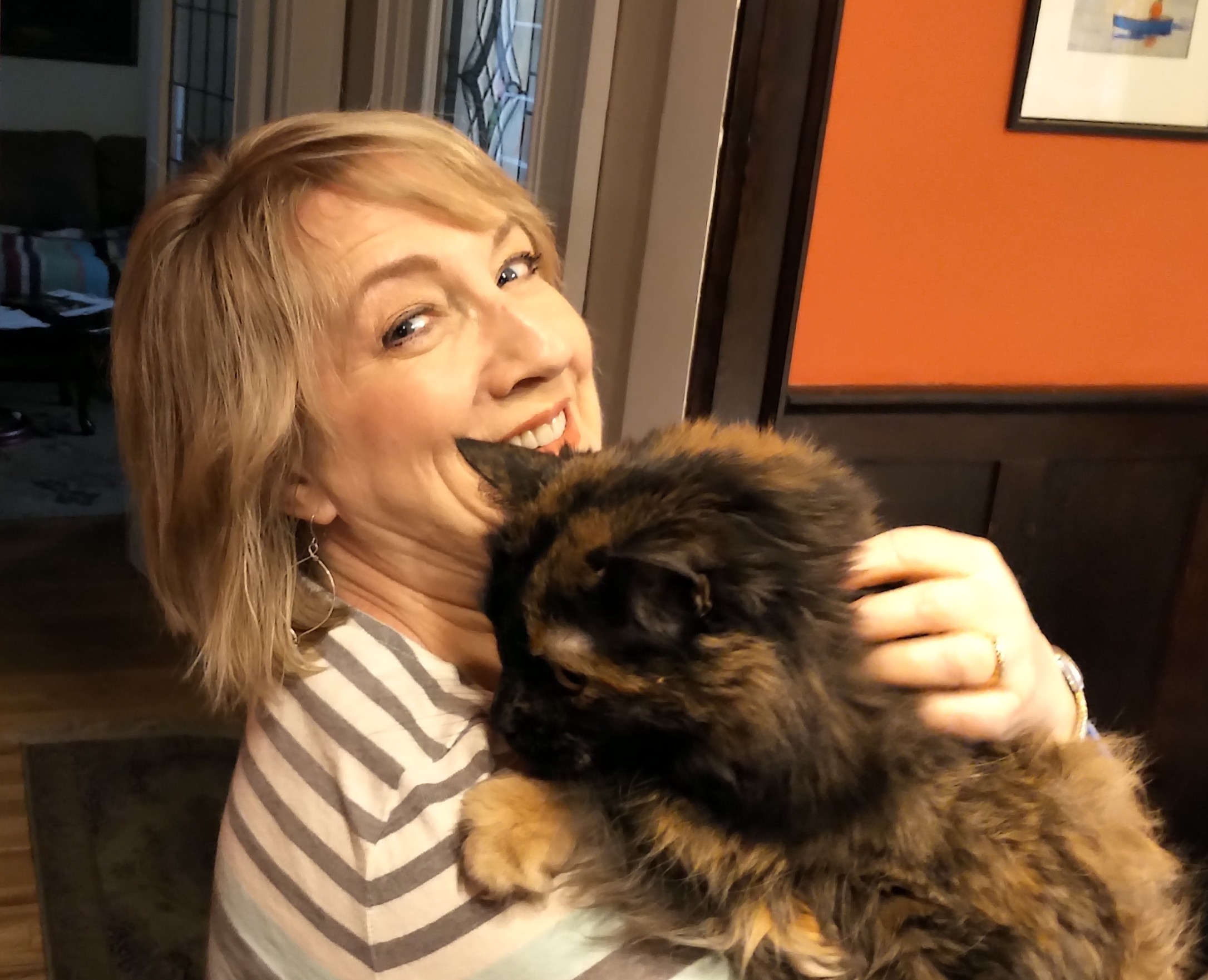 Our cat, Flora, a tabby mix mongrel, was about 6 years old when we met her at Toronto Humane Society. She was called Tammy and became a companion for my mother-in-law at her retirement home. When she later was unable to care for Tammy, we gladly brought her to our home, and I called her Zelda, based on her fiery fur. However—after living with her for a while, and watching her sleep, eat, repeat, glance out the window, yawn, sleep, meow to be stroked—I changed her name to Flora. Like many of us, she has wandered to her food dish more than she should during this pandemic, so she is perhaps not at her ideal weight, but very beautiful.

I have a home office, so having a purring presence is very welcome in these troubled times. I can chat to her about my daily tasks, concerns, the triumphs and tribulations of the agent life. So far, she hasn’t given me much feedback, but is a very good listener and is very content. We once had a highly intelligent Siamese mix cat that was a ferocious, hissing, scratchy whirlwind of energy. Flora is the opposite and is very soothing to have around.

At the end of a typical workday, especially during lockdown, we settle in to enjoy an evening of engrossing Netflix/TV watching. Flora is delighted to join me, purring loudly as she gets comfy on a blanket on my lap. Seeing (and hearing) her settle into a deep sleep during these stressful times is incredibly comforting.

We were told by staff at Toronto Humane Society that her personality would best suit a one-cat home. “Tammy is territorial.” Last year, we were on vacation during a lengthy home renovation project, and the basement was open. Our son was looking after Flora and sent a cryptic text saying, “Everything’s OK. Flora held her own and is fine” Further investigation revealed that Flora had had a lively altercation with our neighbour’s cat, Clementine, who had wandered to the main floor to say hello. I am very glad not to have been there to witness that operatic Mad Scene. So, our typically placid, sweet, calm Flora has an inner Zelda after all!