During recent decades, John Adams has composed a range of highly successful operas, including the repertory standard Nixon in China (1987). The more surprise then when Girls of the Golden West—in its San Francisco Opera world premiere—proved, on the whole, ponderous and dull (seen Nov. 24). Certainly, a few moments of lyricism and soaring drama emerged, but Adams’ musical imagination was not fostered by Peter Sellars’ verbose libretto. The pastiche of words was drawn from a number of historic writings, including miners’ ballads (Adams writes loud, churning, minimalist music for them); Frederick Douglass’ great speech, “What to the Slave is the Fourth of July?”, but there are also passages by Alfonsina Storni, Mark Twain, and Shakespeare (a large chunk of Macbeth), as well as Chinese-Californian poetry of the period. The great words of Douglass are powerfully sung by Davóne Tines in the central role of the fugitive slave Ned Peters. Clarence (Ryan McKinny), a potent narrating figure throughout the piece, opens the work with Twain’s (surely ironic) idealization of the ‘population’ of miners.

Passages from the lovely and insightful letters of the highly educated Louise Amelia Clappe are joined by those from other period historians to set the narrative framework. The fine, compelling singer Julia Bullock, who dominates the opera as its ongoing narrator, is burdened with yards-on-end of flat parlando music. After that, she definitely deserves her grand moment as Lady Macbeth as well as the meditative, lyrical passage that touchingly closes the whole work.

And ‘narrative’ is the operative word here, for this is an opera in which actions are declaimed rather than shown. Adams and Sellars veer remarkably toward oratorio. Adams has written oratorios, while Sellars has staged those of Handel and Bach in operatic form. These experiences seem to inform a markedly odd love scene between the anti-hero Joe Cannon (superbly sung and acted by Paul Appleby) and his prostitute lover Ah Sing (given an aria that shows off Hye Jung Lee’s stratospheric soprano), in which each of the lovers tells the audience what happened, while sitting on their bed of passion. 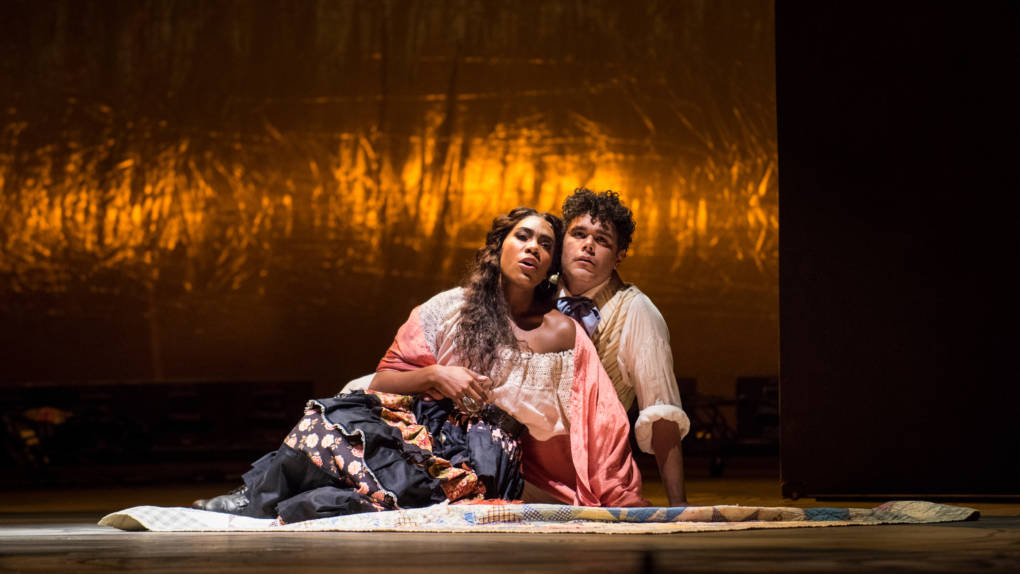 Canadian baritone Elliot Madore given some of most beautiful music

One of the most vivid characters is the card dealer Ramón, sung lusciously by Canadian baritone Elliot Madore. He is given genuinely beautiful music (as Adams can do) and a series of truly convincing relationships with other characters.  He profoundly loves Josefa (the lush and emotionally engaging J’Nai Bridges), his partner at the card table where they work hard to foster the miners’ losses. They are blessed with a moving pastoral love scene early on, and become terrified actors in the brutal July 4 rampage against Mexicans, Chinese, Blacks, Chileans and Peruvians at the opera’s climax. She stabs Joe Cannon, a caricature of a drunken gambling miner, as he rapes her, and is hanged by a kangaroo court. In the shadows of the surrounding terror, Bridges sings the most beautiful aria in the opera exquisitely, set to Storni’s Spanish poetry. 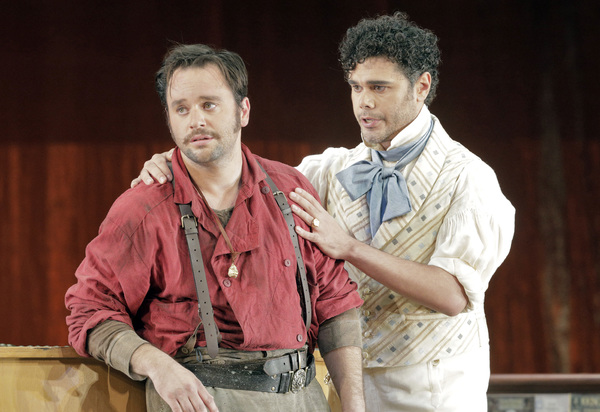 Sellars directed a stripped down, cheap-looking production with the wings open and stage hands parading on stage—presumably meant to invoke Brechtian alienation from theatricality. And alienate it did! The Empire Bar had four neon signs and the miners in one scene sit on modern plastic folding chairs. The vast (historically accurate) redwood tree stump in Act II all but crowded the singers off of the stage. David Gropman’s bare sets reinforce the spartan spirit, though Rita Ryack’s historically-inspired costumes compensated by adding some actual visual interest.

Conductor Grant Gershon led the new and very complex score with apparent accuracy and undoubted energy— even commanding cow bells, snare drum, whip, and temple blocks.  All singers, and much of the orchestra, were skillfully amplified by sound designer Mark Grey. However, this type of sound enhancement lends a uniformity of volume and texture that can become wearing across a long evening.

One may hope that Adams and Sellars will consider revising Girls of the Golden West, though its deeply built-in reliance on deadening narration might point to a major overhaul.